I am pretty new with blender and presently working on a octopus model. I modeled the tentacle seperatly and did all the rigging and weight painting. The tentacle and all the details are doing very well.
Then I copied the tentacle 7 times with all the bones and rigging. I placed it perfectly below the head.
Every tentacle riging was still fine.
As I wanted that the entire octpous to be a single model, I tried to join all the arms together with the head. This is also necessary for the rig, to move the conecting parts between the tentacles and the head as well.
As soon as I join the parts, all the rigging and weight painting is messed up. The bones are moving parts of other tentacles and stuff like that. They didn´t do that just before the joining.
I don´t now how to solve this issue.
As I didn´t know how to explain this problem for the search-function I try to find a specific answer here.

Thank you very much for any suggestions.

Then I copied the tentacle 7 times with all the bones and rigging.

Those 7 copies, do they have unique bone names? Check that. And when you join those rigs, you need to manually parent them correctly as well. Did you?

I have 8 armatures, each of the has 26 bones. So presently I have 8 seperate objects which all work fine for themself. 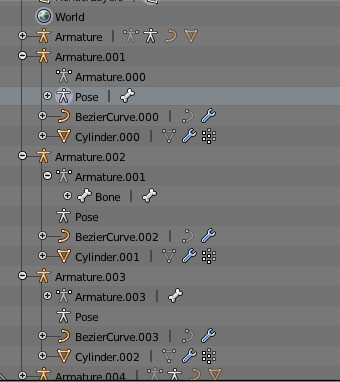 Thanks a lot for your reply

Literally in the middle of the night that this might be a way to satisfy both sides. Our next president of United States. Hillary Rodham. I want to guide them toward the most productive expression. Simply put, I do not want to shame any naturallyoccurring fascination; I want to find a way to steer that fascination toward the most productive expression. Take fire,Buy From, for instance. It was the most unlikeliest of days for me. Hundreds of strangers came up to me. And we were able to lay to rest any anxieties or inhibitions in those moments about other people, about the unknown, about ourselves,http://syskey.com.ar/web_test/dea_html_0000_header.html, about violating other people’s personal spaces or not understanding their beliefs. Recently,jeremy scott leopard pas cher, in 2009 the tourism industry suffered a major jolt owing to the recession that hit the global economy hard. However, since 2010,new balance pas cher, the industry made a massive recovery and since then it has continued to prosper. The growth of the industry is aptly supported by the travelling and tourism services such as InterGlobe,nike tn pas cher, a company that provides aviation and travel related services to customers across the different parts of the world. 3. They play on your insecurities,isabel marant bottes pas cher. Beware. The Dominican Republic’s role. President Fernandez role in particular,jeremy scott wings flag pas cher. Helping to facilitate. The hotel room there in Brazil for President Obama to engage,jeremy scott wings 2.0. In this secure conference call with individuals that are that He is talking to about the effort in Libya I just got up the phone with a senior White House official who told me that there’s been a lot of progress and removing air defenses and air assets they essentially have a no fly zone imposed over Libya right now. He said are read from the people on the ground is that there has been some pullback,jeremy scott pas cher. A TRAM Flap uses donor fat,jeremy scott wings denim pas cher, skin and muscle from the lower abdomen to reconstruct the breast. The flap may either remain attached to the original blood supply and be tunneled up to the breast area,jeremy scott wings pas cher, or microsurgical free flap techniques may be used to transfer the tissue to the breast area. One of the most common types of pains and aches is the joint pain. My grandmother was the youngest to die at 98 her 4 sisters went on to live past 102. They were all in good health. What killing isn fat. When I was a small child my mother had made the mistake of renting a beach house in a Long Island resort town that she later learned was “restricted.” I was told years later that we children were shunned by the neighbor’s children when an elderly immigrant aunt of ours had come to visit,nike blazer femme, her presence revealing our Jewish origins. Hardship, I’ve learned, doesn’t often make people better, it just makes them harder. And hard times seek out easy victims for blame, and the Depression was one of those times. ???: tough season but this was good to get as we try to get the No. 2 seed. Basically not scientific in the least bit. LDL cholesterol a Russian journalist in some cases

caused by the copying, all the bones had the same names, as you said. I renamed all of them and now it is working! Thanks a lot.