after some months of watching and redoing tutorials and reading a book about blender
I wanted to create something on my own without any tutorials.
Probably my choice didn’t fall on the easiest thing to create, but hey what should happen? :eyebrowlift:

I chose to model a Junkers 87 D5 Warplane from WWII and started to model it out of 3-side reference images.
So here is my actual status and I’m very interested in feedback and any kind of tips of you. :yes: 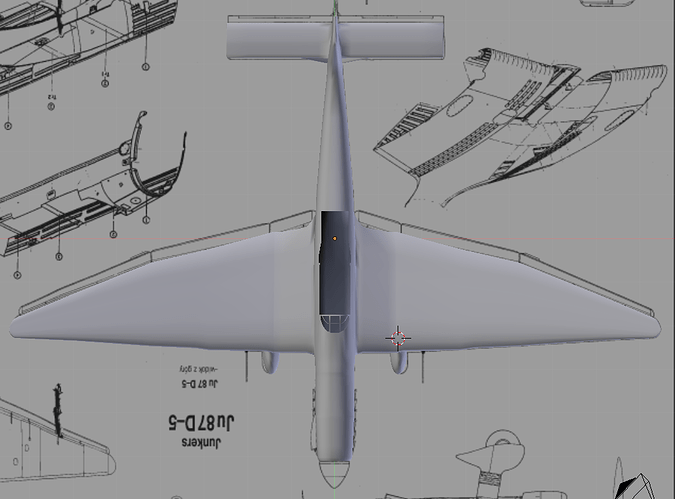 You look to be on the right lines . Hard to tell without a mesh view . Not too sure about that straight/sharp line from the front top of the radiator forward and up . might just be shadow but looks out of place there . It’s not too difficult to make a reasonable model with the relevant 3 views and you are certainly well on the way. I cheat with the cockpit glazing and make a duplicate of the framework , fill in the faces , make them glass and shrink it slightly to fit as one object just within the frames.

One big thing is you should make the plane from separate objects and not from one single block/object. Otherwise you’ll have loopcuts running all over the mesh and it just messes it up, the topography just goes to hell. So the main body should be separate from everything else, the wings too, landing gear, cockpit frame, etc.

You can see a lot of pinching around the horizontal stabilizer and its support but that can be fixed by making them as separate objects.

Keep things as neat as possible–good topography. Keep vertices neat and straight when needed. Let’s say you want to straight a vertical line, select the line and press S on the keyboard, then Y, and then 0. For horizontal lines press X instead of Y. This will straighten them out.

thanks for those tips with separate objects, I think this is my biggest struggle with this model. I tried to model all as one object.
The Problem with the loopcuts, I faced this by using the knife tool and cut where I needed more vertices.
As I’m not that far yet I think I will redo the mesh applying your tips.

Do you work with a mirror modifier and subsurf or model high poly out of the box?
I think it’s easier to model on a low poly base and add more realism by adding a subsurf modifier.

Nice start - keep in mind where you separate your mesh if you decide to. Also if your not familiar with this site http://www.military-meshes.com/forum/ it is a great resource, NeilF92 & I (PeaceMaker) are members. Keep up the good work…

thanks for those tips with separate objects, I think this is my biggest struggle with this model. I tried to model all as one object.
The Problem with the loopcuts, I faced this by using the knife tool and cut where I needed more vertices.
As I’m not that far yet I think I will redo the mesh applying your tips.

Do you work with a mirror modifier and subsurf or model high poly out of the box?
I think it’s easier to model on a low poly base and add more realism by adding a subsurf modifier.

To save time and effort, yes you’ll use the mirror modifier and the subsurf modifier to make things smooth.

So I tried to apply some of your tips and started again from scratch.
Actually the model is separated into 3 different objects --> Wing, Fuselage and the front part with its radiator.
I first model the right half and apply some mirror in the later steps.
Here we go. Also did a quick wireframe render. 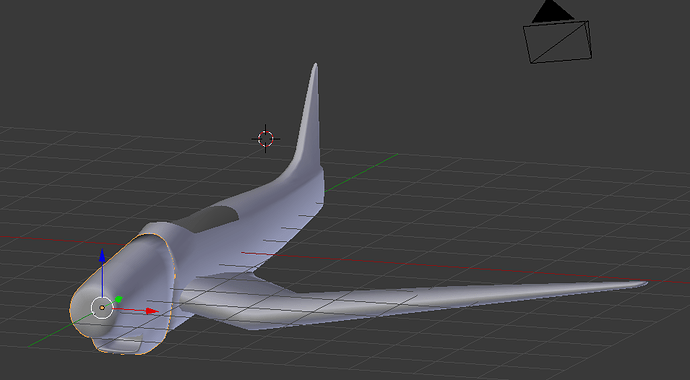 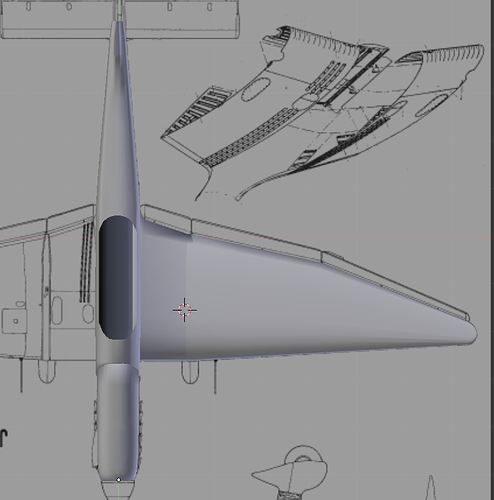 Right now I’m way more satisfied with this model now then I was with the previous one.
Also it indeed saves a lot of time by modeling in separated objects and keeps the topology way cleaner.
Thanks for this tips

I am not quite happy with the main fuselage because it looks too flat on the sides, so this is one of the next steps to modify.

Good work @Schwalberich the model looks much better, having separate parts is much easier to work with and also troubleshoot if needed.

Although is waaay better than the first one I have a few issues that could be solved by either checking the way the normals are facing (in edit mode select All and press Ctrl+N to recalculate them) or by fine tuning the topology with some edgeloops or by other means like moving some verts here and there. 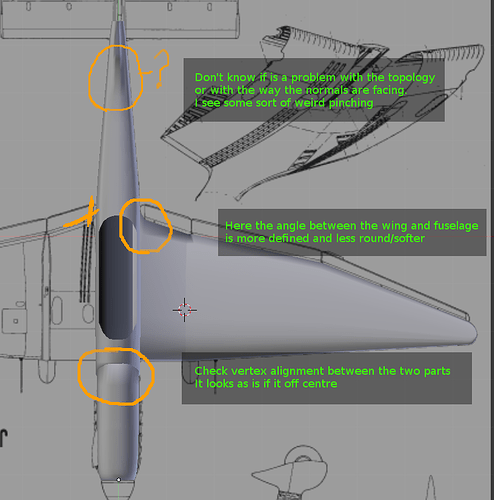 Other than what I just said, is looking good…keep on the good work and happy Blending

The mesh looks reasonable. You’ll need to sharpen the circle at the very front to make that flat . might also be an idea to make the bottom of the fin where it meets the top of the fuselage sharp but I’m not sure how that will turn out .
Keep trying things - - you’re doing well . Also you might need to firm up the trailing edge of the wingor thin it down a bit .

@Tommy
The problem with the tail wing could be solved by separating it and making it a single object. I’m struggling around with the tail part because on reference images you can see that this part is going from a round shape to somethin flattened.
This is quite challenging to rebuild.
Also you’re right with the front, didn’t recognized it was off center.

@Neil
I’m not quite sure what do you want to tell me with the trailing edge. It is youst one edge so I think ther’s nothing to thin.
With the wing right now I am pretty happy with.

But thanks to you guys. Will look at the parts you criticised and try to make it better.
As I said in the introducing post, I perhaps didn’t choose the easiest model to start with

@Schwalberich I know exactly the feeling passing from following tuts and reading books to modeling your first object without the crutches of the tuts. If you have a look at my F-16 WIP the same happened to me, but trust me it’s the best way to learn and master Blender.

I once read “A master is someone who has failed more times at something than what a beginner has even tried” so just keep blending and learn from your mistakes…but the main thing is make it fun.

I agree that you should separate the vertical tail form the rest to avoid any issues further down the road. Anyways, the plane so far looks great

It was really the bit near the wing root - orange circled - looked like there was a definite shadow there . I see now that with the rest of the wing what I thought was a blunt shadow is just a line on the plan underneath .
As long as you are happy w ith it press on . I can’t spin it around and zoom in so just guessing .

New Life Sign of my work, had some trouble to get free time ^^

@tommy
I totally agree to that quote you posted. So it’s going to be a long and stony road. ( is this word even existing? Looks like Sony

A separated the tail fin from the main fuselage. It still needs more attention but I will go back to it later.
The problem with the wing root shadow was faced by adding a loop cut to it

Just added the Covering of the Gear and worked on the Cockpit.
Cockpit was made vertex by vertex, couldn’t handle it with a basic cylinder

it’s also just the basic and needs
a lot of tweaking till it fits right.
Material is a placeholder, yet.
I first want to model everything to end and start with texturing and materials after. 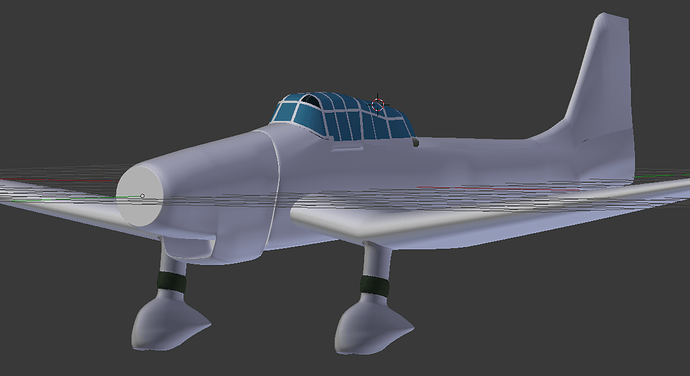 I need to find a way where I can close the rounded triangle without looking stupid. any ideas?

And here a quick and dirty render 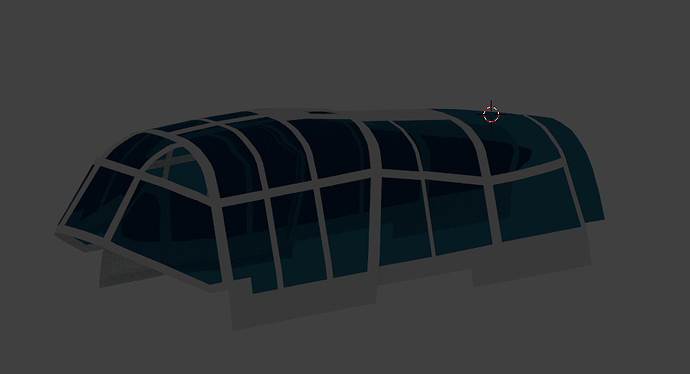 Looking better, I agree with @NeilF92…as long as you are happy with the way things are, then just carry on.

In my case I suffer from OCD and have to control myself as to how things are and take into account that the F16 is my first real project (without any tut crutches) and a learning process, so I tend to get stuck sometimes with details that really don’t matter or make any difference to the end result…all this said, forgive me if I point out some things where you might be struggling with during the modelling process or leaving them as they are, because you are giving yourself time to figure them out. :o

Now the small things that caught my eyes: 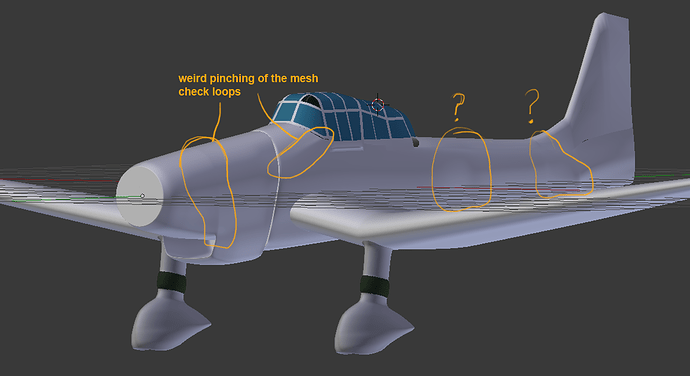 Not sure what problem you are having with the open triangle - presumably the front corner of the glazing ? If so it should be easy enough to sub divide so it folds nicely around the curves .