First test with light linking, and it works quite intuitively.

But there’s an issue with the light affecting the isolated object: 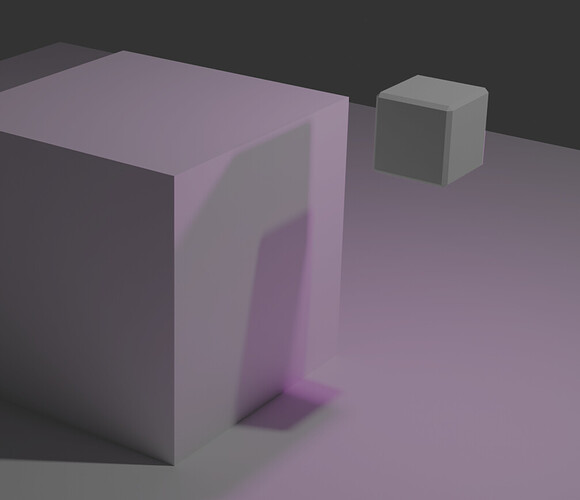 The small cube should not be affected by the pink light, but it renders with a pink edge where it overlaps with the ground plane. How would I avoid that?

Edit Ah, I see - light linking is a post effect, and not integrated into Cycles itself. It seems to be an issue with matte edge leaking.

In this scene that also means, unfortunately, that when I tumble the view and pause mouse movement, it sometimes stops responding because the post effect is being calculated.

Pro Tip: Don’t be a dummy like me and follow the troubleshoot section under FAQ if you’re having issues.

3.2 wasn’t showing my GPU under render devices. Spent way too long reinstalling drivers twice and pulling out my hair before deleting the older 3.2 files like the troubleshooting section says. Now it all works, all good.

The new features seem to be working great, thank you!

Hi, I cant work out how to edit the light-mixing in the final render. I would like to tweak lighting when render is done. Could someone give me a very quick step my step. Many thanks

Eric just replied to my issue on Blender Market. Thanks Eric for the fast reply.

currently I’m neither a K-Cycles or E-Cycles user.
But there’s one feature which could this make a instant buy for me and I think it’s fitting maybe into the scope of K-Cycles:
Simpilfy textures per material or object.

At the moment you can simplify only globally in the render settings. But than you may reduce textures you want to keep high (e.g. HDRI or foreground objects).

If this mechanismus could be also added to materials or objects, than this would be a great help for optimizing the scenes.

Of course there’s also a edge case, what if you a setting the max texture with of a material to 2k, which is using a node group which is shared with an other mat which is not simpilifed? Node groups are shared and can contain also textures.

But what do you think? Could this be added to k-cycles?

I think the problem here is in Blender. Nearly all other products handle textures different. The original is used for rendering, but for viewport use you can set a max size. You can also cache textures, either for gpu or for being only visible im rendering.
In Blender you can do nothing of that. Your textures will be loaded each time you start eevee or the viewport render and Blender load all texture channels. No way to limit it just for diffuse or set a max size. You can’t even tell a texture to not be shown in viewport.
That way Blender waste a lot memory and slows down often when changing viewport style.
Kind of an old problem of not using industry standards, but shortcuts. Good example is also the display between viewport and rendering. You can’t set viewport rendering to show whats visible on rendering and you can’t render what the visibility in viewport is.
Or the alpha channel. Every software render the alpha, but doesn’t display checkers. In Blender its either alpha, but them your environment will be hidden. Drives a sane person crazy.

well, the feature is already there for cycles, called simplify and can bet set per viewport and rendering: 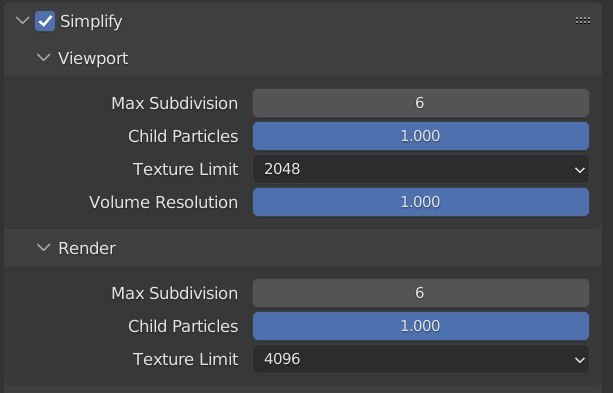 The problem is, this settings is for ALL textures. You can’t select which should be simplified.
If there would be a Simplify per e.g. material, we could scale down background materials while we leave foreground materials high res.

And in the Blender settings is something Cycles indepndent for the viewport, but I never used it, after is’s again for all textures 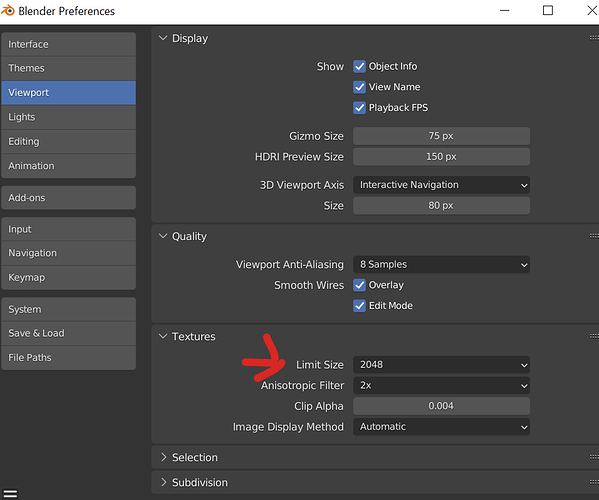 well that’s kind of limited.
The texture size limit is only affecting Cycles. It doesn’t affect viewport or Eevee.
The one in the preference is not view depending, just scales all down.
There is an add-on that let you convert all textures and then switch between various sizes on demand.

The thing people need is a way to control what is displayed and in what size. Viewport performance related. But that doesn’t belong to K-Cycles.

This has being solve with other renders like Arnold they have tile texture caching it converts all textures to “tx” format. This allows 100gigs of texture to render with low memory.

This is a big task not for K-Cycles at this time. Stefan Werner did branch for CPU texture caching, but not for GPU.
Here is link of devtalk thread https://devtalk.blender.org/t/tiled-exr-texture-caching-support/562.

Yeah, but it looks like that this texture caching feature will not come for the next years.

And I guess to extend the current existing global texture simplify function for cycles also for materials, would be a valid work around, until we get this magic texture caching (maybe) in a few years.

K-Cycles new product for the Mac OS with Metal GPU and CPU support.

The Mac OS with Metal in both the Intel and M1(arm) platform this is a separate product. Currently only in version 3.20 beta with Mac OS 12.3+.

K-Cycles Post FX viewport matching the output resolution changes the Cycles preview to match exactly the output resolution. This is very useful for pixel based effects like Bloom and Flares because the amount of the effects depends on the render resolution. While in this preview render mode it is possible to make adjustments exactly like they would appear in the final render. It will also disable viewport selected outlines for better visibility. This feature can have other uses for better accuracy in adjusting materials, depth of field, etc.

New builds for K-Cycles 3.2.0 stable for Windows, Linux, and Mac 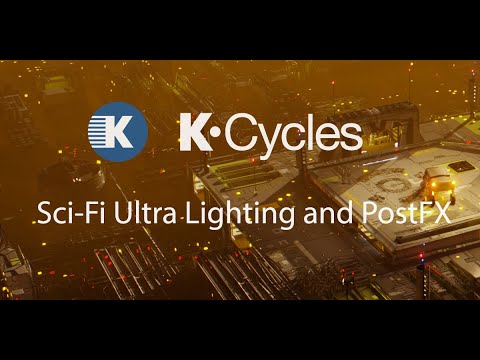 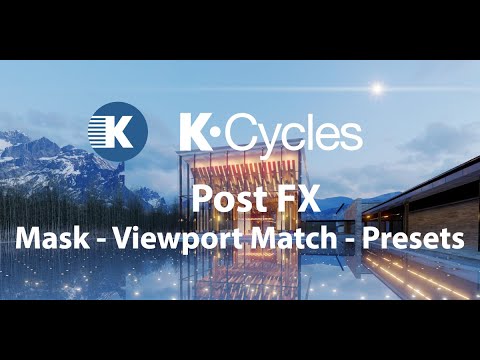 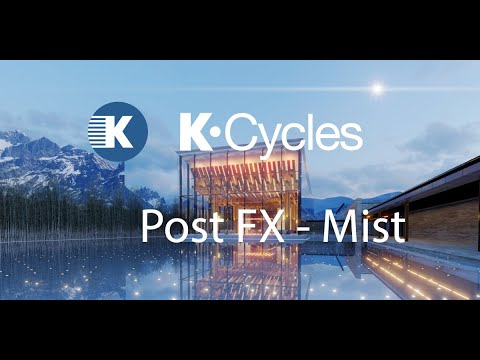 is it possible in k-cycles to render a static image in several parts?

for example: render one layer at a time and join them in photoshop?

If I understood you correctly, that’s a native feature to Blender which would also be available in kcycles.

you did not understand :

I wanted to render the image in parts and then put it together in photoshop.
to speed up rendering.
it can be by layers or region or any other way.

for the machine to be stuck in the render less time.

Are you talking about rendering the foreground, middle-ground, and background as separate images then compositing them together?

You can do that by view layers from the link Domiek has provided.

Basically you will be able to render separate parts of the scene to save on time, then composite them together as a final product.

Once all three layers are rendered out, you can combine them into one render through the compositor. You should be able to get a single image out of multiple layers of renders.

what about the shadow of objects on one layer that cast shadows on objects on another layer?

is it possible to have them?

The Shadow Catcher option will have to be enabled for the object.

Here is a link to enable it:
https://docs.blender.org/manual/en/latest/render/cycles/object_settings/object_data.html?highlight=shadow+catcher

Basically you can have a copy of the meshes you want shadows casted on, then composite them on top of your other layer. This method is pretty easy since you just have to have fake meshes to cast shadows on.

how can i render textures and objects on one layer and lights and shadows on another layer?

the image rendered with k-cycles has the textures blurred.
what can i do to fix this?

another question :
how should i configure k-cycles to have high resolution images like 4k movies?
I’m not talking about image size, I want the sharpness of 4K movies.

one more doubt :
why is the bump map in the eevee viewport deeper compared to the bump in the render with K-cycles ?
how can i fix this difference?