So this is my first real attempt at a humanoid character. I was really drawn into this piece from stroggtank on deviant art. 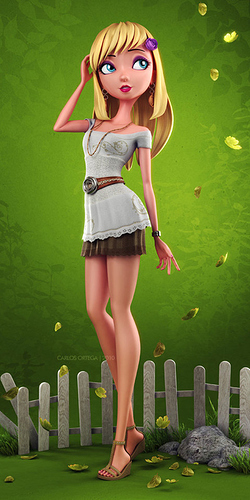 So I decided to try my hand at creating my own character in the same style.
First I started at just trying to get the proportions right, not really paying any attention to topology, this is where I ended up. 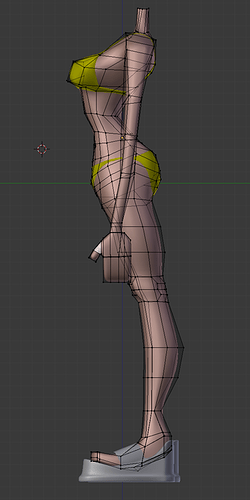 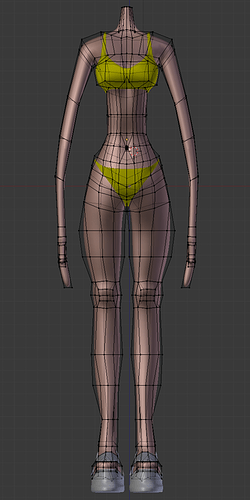 After I got the body proportions I was pretty much happy with I started on the head proportions. Again, these were just roughs to get proportions close. so Here’s the head. Add head to body and render… 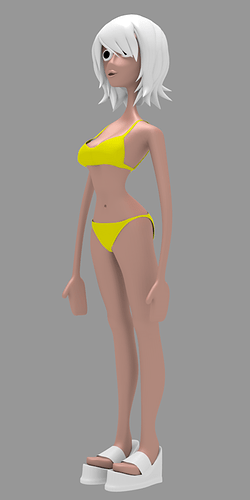 Render kind of disturbed me, she kind of looked like a blow up doll. Oh well. I was pretty happy with this so I started working on retopo. Those images to come.
What you guys think so far?
Yoeri (Yoeri) April 25, 2018, 4:42am #3

I think the ‘blow up doll’ look is in the pose. Perhaps try something a bit more relaxed?

Ya I’ve reworked her for topology, she looks much less like a blow up doll now, will probably update tonight.

Heres the face/head topology, not sure this is the greatest so any pointers suggestions would be greatly appreciated.
Thanks 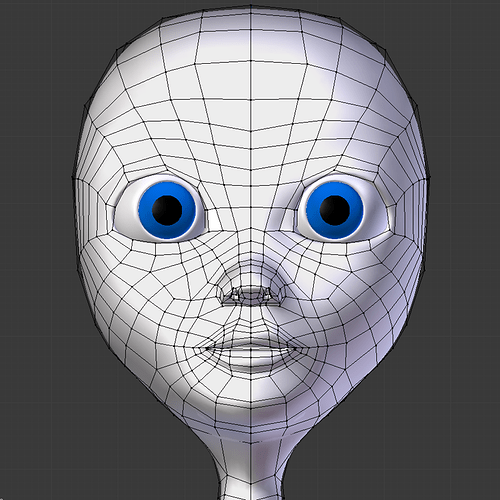 I tried to give a bit of visual feedback on the torso without leaving the style. 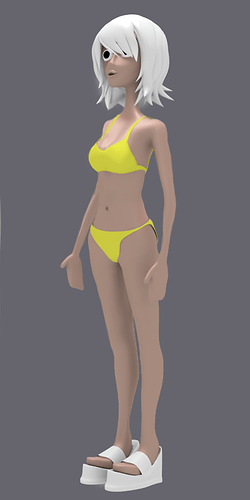 The reference image is certainly thin, but even her waist isn’t quite that thin in relation to the rest of her torso. Personally I find it helps to visualise the rib cage then work the proportions out from there. Take your front/side view renders and try sketching a rib cage on there. I know it’s stylised anatomy and all, but a humanoid is a humanoid. Unless you are going super super stylized… 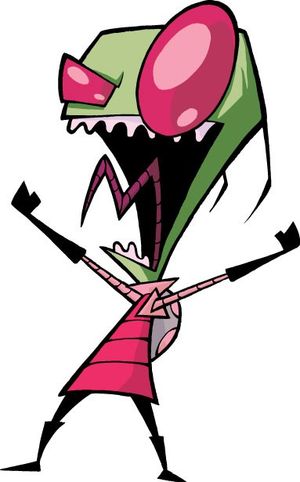 Maybe it is all the time I’ve spent trying to rig them, but a lack of shoulders is what got me next. Even if it is the slightest hint of bulge at a shoulder muscle. The arms aren’t just tubes, unless they are a robot, mutant, etc. Long arms and a similar lack of elbow definition are the other points.

The face topology is most of the way there actually. The two main suggestions I have there would be:

Other than that, good progress for a first human. I remember hacking together so many models before I got this far, especially faces.

Hey Ben,
As always great advice. Just got slammed at work so for the next 2 weeks won’t be able to work on this, but after this project is done I’ll come back and update some new images based on your suggestions. Thanks for taking the time.
-matthew/mofx

Ok, work project fell through here is updated face and upper body topology. I’m having trouble with eyelids, eyebrows, and just all around feminin features. Any input.
Thanks 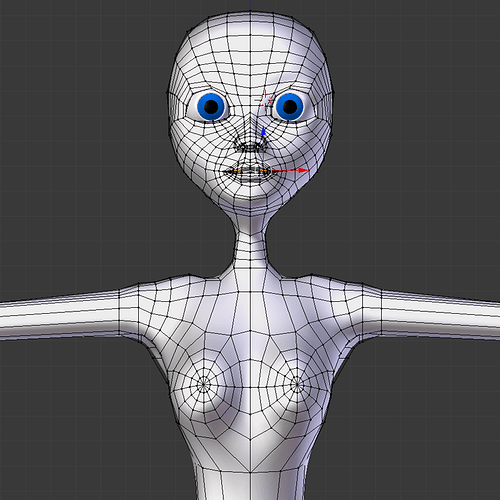 That’s a nice character, a favorite one, not bad even for me.

There the link for the wires if you are interested. Seems the original character topology was made by a method similar to Bmesh.

Megastor, great find, looks like I need an account on CGSociety now. This helps a ton, thank you so much.

im crap at them too tbh lol, maybe give the eyes a more asain look to them, it already looks quite anime

hey there, thought i’d share a couple of pointers on the eyes topology which you may find useful. 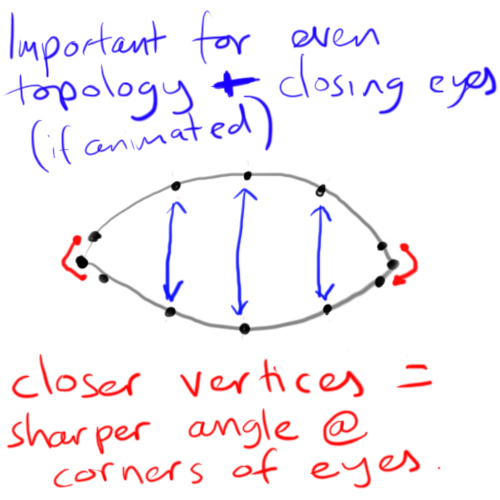 would have been hard to explain in writing, but the point is keep verts at top and bottom parallel to each other, close verts at corners. also the same theory with the mouth topology, but looks like your mouth topo is fine as is (maybe could even out the verts some tho)

last tip: put 2 edge rings close together where you want to define the transition from skin to lips.

She looks great, but agree her waist is slightly too slim; her eyes/facial expression seems to be pointing up slightly.

OK, so the eyes are really starting to piss me off. Can’t seem to get that cute sexy look into them. Kinda looks like a crack whore now I think. Can anyone give me some pointers. Also this is the image I’m using as a reference for the eyes, same artist. It’s not just the shape of the eyes that give a certain look or expression. (Tried quickly to find a good google reference, but will explain with text.)

I know it can help keep the modelling simpler to keep them hidden, but every now and then at least I would put the brows and hair, etc back in to complete the look. Missing eyelashes here are quite freaky in particular. The shape of her brow hints that her eyebrows would probably be a bit raised. The size of the pupils compared to the blue iris suggest low light, shock or both, but her mouth isn’t showing shock at all, which might also be throwing you off.

However, one thing that might help immediately is rotating her eyeballs up a bit so that there is no white of the eyeball between the top eyelid and the iris.

As far as reading facial expressions goes, that is a pretty quick way to show surprise. Notice in the reference image of stroggtank’s that even though your eye shapes are quite similar, her iris’s are slightly bigger than your character’s and positioned in such a way that there is no white space between the eyelashes (which are fairly thick) and the iris.

That should hopefully make her look a little more ‘natural’ for starters. I know what you mean though. You can spend a whole day tweaking one element to look “perfect”, but it still looks off if the other elements around it don’t relate well.

Another tip is rotating each eye about 5 degrees away from the camera on the Z axis. (right eye turns out right, left eye turns out left). This is a common one that can take a while to figure out / be told, but it helps avoid the eerie ‘cross eyed’ look even though it sounds logical that both eyes would point in exactly the same direction. Open up the Sintel Lite file if you don’t believe me.

So in summary, I’d start with tweaking the eyeballs before changing the eye shape too much because I think that might be what is causing you frustration.

(Side hint: Beorn/Freen pinged me several times about the bright highlight in a characters eye when working with Sintel. Sometimes it needs an extra light source just for the eye, but it makes a huge difference to the ‘life’ factor for any rendering/drawing/painting/etc. I’d guess that a fair part of the reference character’s “cuteness” is thanks to the white square reflections in her eye. Large for what they are, but such a small part of the overall image.)

Eyes are hard. Stylised eyes can get really hard. Keep it up though!

Ben,
Thanks again for the great advice, do you want to be my personal blender/life coach? Ok, going to start to focus on eyelashes eyebrow and hair for a while.

Glad to help. I’ve been fortunate enough to receive pages and pages of good critique from this forum, much of it here:

It’s an older thread though, so please don’t bump the thread.

Ok so here’s a updated render, I think it’s coming along. Still have issues with the eyes, any pointers? They just look dead. 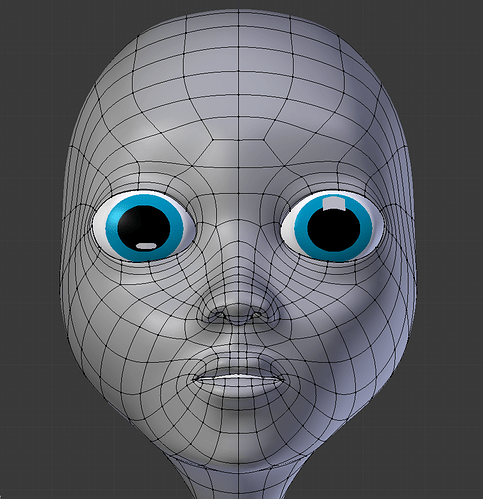 I’m going to guess those are modelled eye highlights instead of actual reflections? For starters they don’t match, which isn’t ‘right’. Not that eyes will have perfectly identical reflections, but I can’t see any lighting setup where that might actually happen. At the very least they should be strong specular ‘relfections’ from the lights that are lighting the character itself.

Instead of rewriting my previous hints on the eyes, I’ve done a (very quick) paintover to show the difference of what I was trying to say with text. 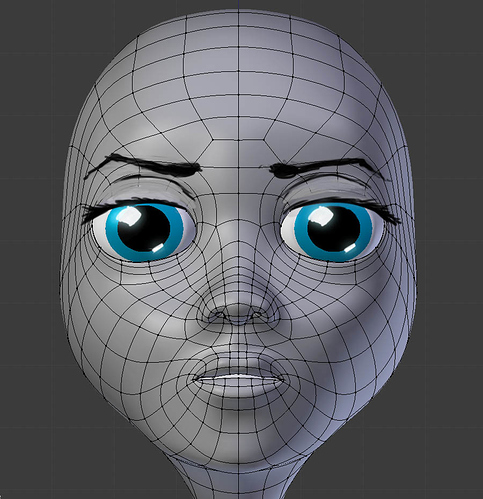 Another thing though, characters really come alive with expressions and if added - with movement. So while a base mesh can have a lot of life put into it, they usually look at least somewhat dead in the default pose. Takes a little getting used to. Kind of like modelling a bald character and trying to keep the hair in mind for later.

The thing that really bugs me about the eyes is how they pop out. It could be stylistic, this is common with anime, but the eyes are actually set back further in the skull, with the eye sockets putting the eyeballs in sort of a cave. This is a great design to protect the eye in real life. So if I were to suggest, I would say move the eyes deeper in the skull and create a stronger cavern around them 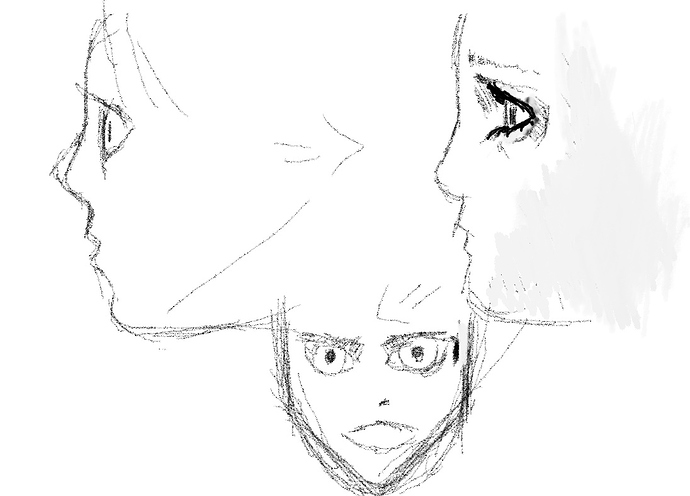