Kart Racer (No Name Yet)

Hey all, it’s been a while since I’ve posted in the game section. I’m working on a kart racing game for a school project that will be due around next April/May. Because of this, the 3D platformer I started a while ago (and haven’t touched in a while anyway) will have to take the backseat to this project.

Anyway, the game will have similar mechanics to Diddy Kong Racing on the N64 as far as power-ups and kart physics (that’s right, no stupid blue shell or unfair rubber band AI from Mario Kart. :no:) The finished game will only have a few tracks (I’m hoping for at least four), but I want it to be as aesthetically pleasing and professional as possible. Local multiplayer would be a cool feature, and I might implement it if there’s time. 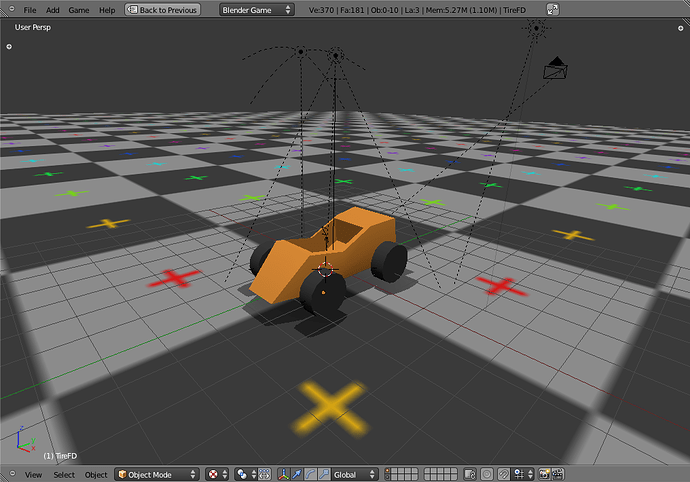 Alright, I’ve been working on tweaking the kart physics and controls. Ive decided to attach a quick demo so you guys can test out the game play and hopefully find some bugs. 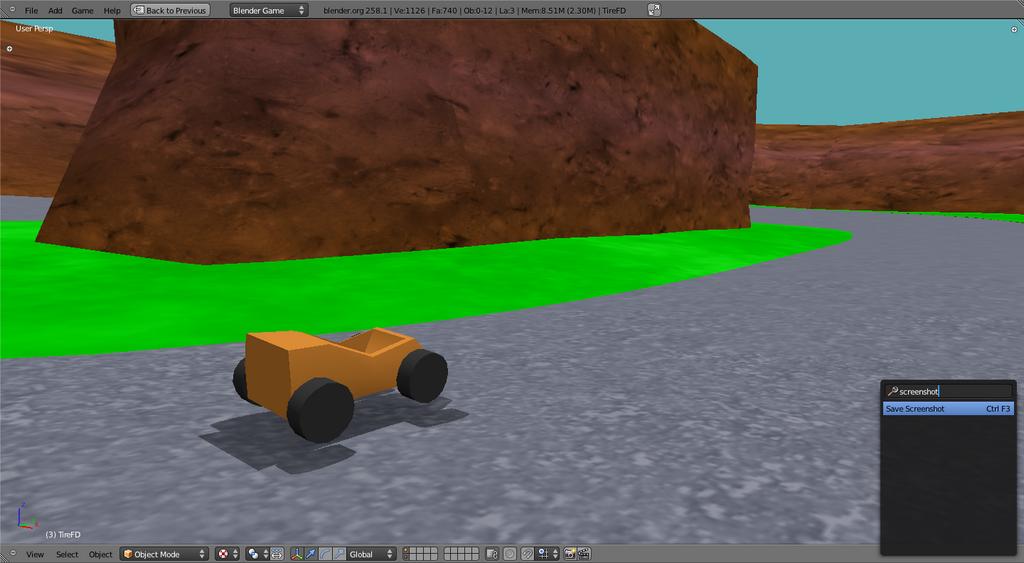 Controls- Up arrow is gas, left/right arrows steer. Press Z in addition with L/R to turn more sharply. Down is brake.

There’s still some minor problems, but I hope you enjoy it so far.
-Textures are only placeholders for now. UV mapping needs to be improved on walls (This track is only for testing purposes anyway, and won’t be in the finished game.
-Kart still needs proper orientation constraints. There’s a way to ride on the outside rock wall- see if you can figure it out.

-Camera is slow parented for now, but needs a camera actuator.
-There’s some gaps between the different meshes, but none are big enough to fall through.

Physics are nice but feel a little un-dynamic. I wish you luck, hopefully it turns out great.

i liked the feeling of speed,it really looks like a racing atmosphere keep it up dude the physics looks great to me!

Thanks for the feedback, guys. @Laxwolf, what do you mean by un-dynamic?

Hey, this is pretty cool! I think this game could get very far.

A little difficult to obtain this picture but I did it.

Took me a while to figure out I was driving in circles though. 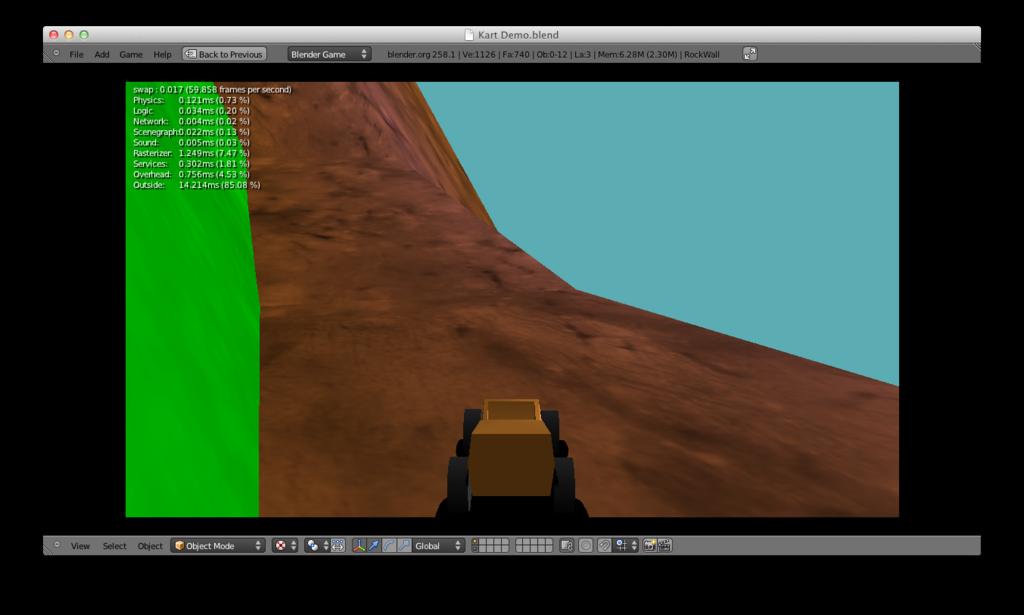 @Sonic14- Yeah, just a small bug. It’s easy to drive on the upper part of the rock wall once you know how. I still don’t get how the car can possibly do that, but I already know I have to add an orientation constraint to keep it from doing that.

Well, it’s been quite a while since I’ve shown any sign of progress. Anyway, I’ve made some major improvements in kart control, and I’ve starting modeling a few of the levels.

This is going to be the second track in the game- SawShark Beach. Obviously, it’s a beach/island themed track. The major assets of the level are modeled, but it still needs more details (such as rock formations, foliage, etc.), and the texturing definitely needs work. 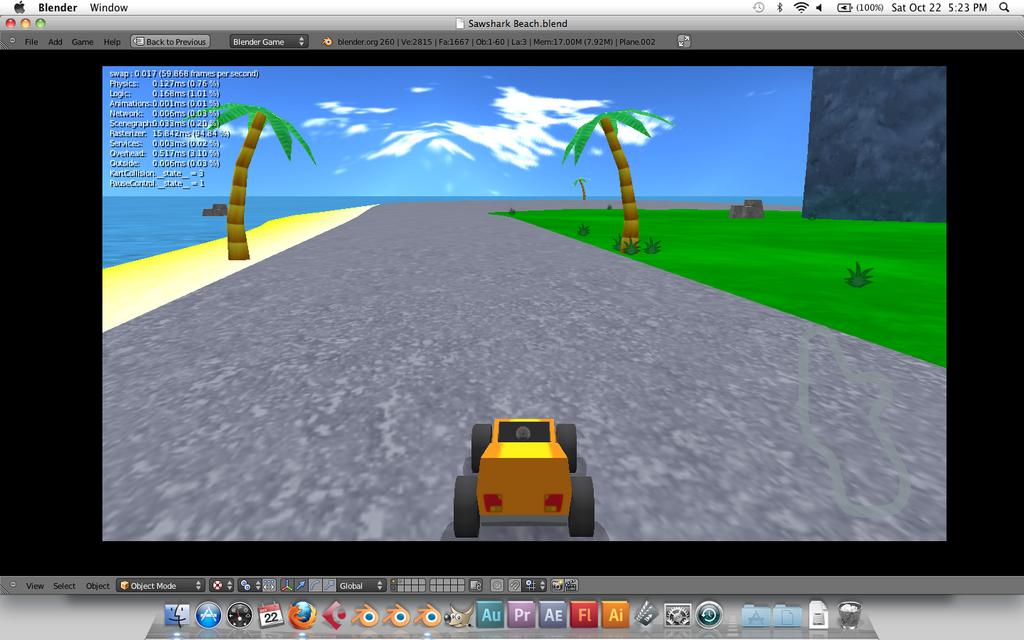 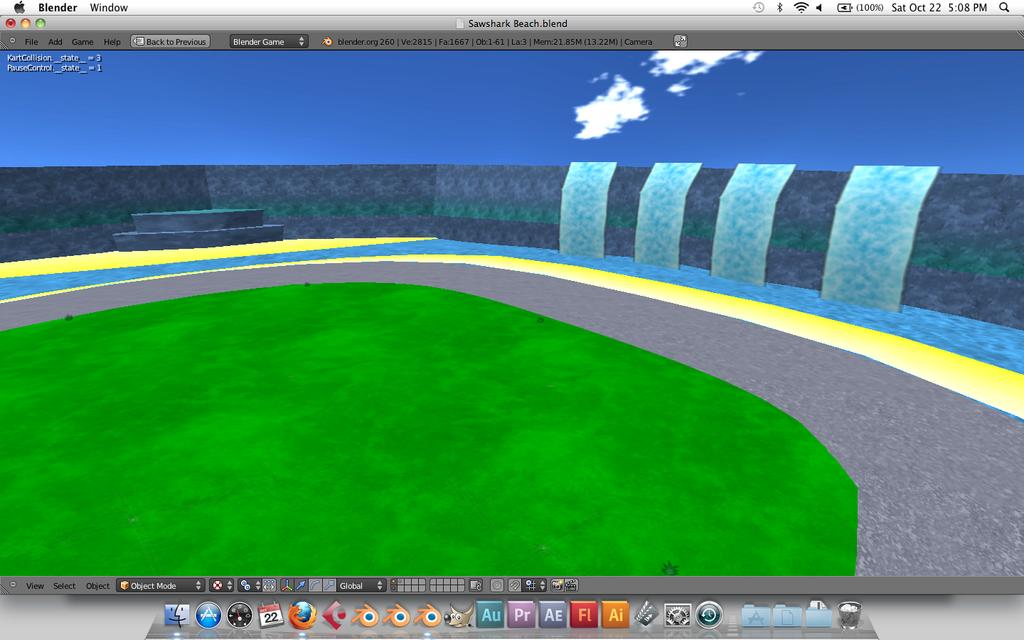 I’ve just started the third track, with a snow/ice theme. As of now it’s bare, but the track shape is interesting in that it crosses over itself to form a figure 8. 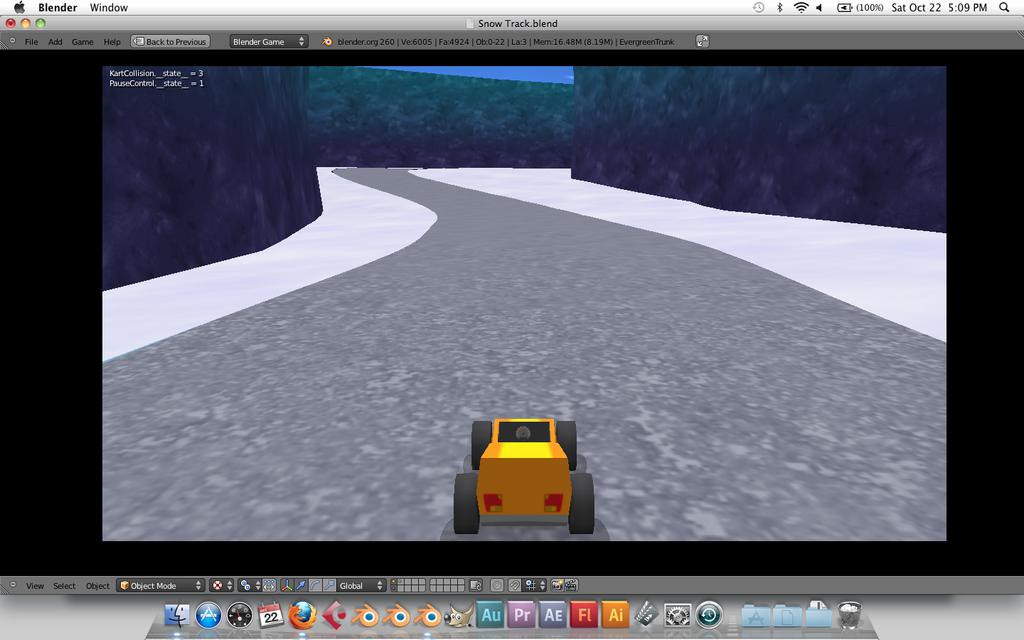 I’m just about to start AI with the new pathfinding system, so this should be interesting. It’s unarguably the most difficult part of this project, but I’m willing to try. :evilgrin:

I’m also considering starting a separate blog for the game’s production- there have been a lot of little changes that are too much to post here, and it would be nice to document them all. I’ll think about it.

Just wanted to pop in and say that this is looking pretty nice. I like the simple, clean style of the graphics. Keep working on it!

Thanks, SolarLune! The aforementioned ‘simple’ style works tremendously with my crap modeling skills. :eyebrowlift: I am getting better though, and the levels will have some more detail while still retaining a cartoon-like feel.

it’s going to be a fun game

first track is fun to zip around in

i have blender for dummies!!!\

The physics have a nice feel to them, but I find lack of turning annoying when I try to turn around… which is impossble!

But I can’t wait to see how it turns out

This is pretty nice, indeed. I think that the friction on the grass and rock is too high, almost like you’re driving through mud. Other than that, it feels pretty good. Nice job!

Keep in mind guys, the physics have improved greatly since that demo- if you guys want, I’ll upload SawShark Beach in its current state to test it out.

Same controls as before- left and right arrows steer, press z to turn sharply, and up is gas. Let me know what you guys think. I’m always open to constructive criticism.

Keep in mind that this is still obviously a work in progress- there’s some stretched textures and other things that have to be improved. Also, ignore the AI kart- it just drives in a circle. Still working on that.

@dfwlucas, you can reverse by pressing the down arrow and left shift. This is the default for the Vehicle Wrapper.

Hi, I tested your beach level (it was fun but I couldn’t play in GLSL because I have a Mac OS X) and I noticed that as you get closer to the waterfall it gets louder, Did you use the new 2.6 Speaker to achieve this or was it python? It was fairly cool