a lot of work on skin, lashes,still without hair…

Wooh! Look so real! Did you trace it from real picture?

The cheeks seem to be out too far. Try pushing them in a bit to make the head more oval instread of round.

The ears seem to be a bit too low as well. The should line up with the eyes.

Nice texture so far though.

I don’t know. I think the ears are pretty good size. I agree about the cheeks.

The modelling is very good…

I think the lower Jaw is too masculine. Bring it in some along with the cheeks. The textures and eyelashes are superb. The eyes seem to be too much of 2 colors, probably should use either green or blue, not both.
Lips look good also except she looks sad with the frown she has.

The textures on her are amazing! I look forward to seeing how she ends up.

It looks really good so far! There are some tweaks to be made in her proportions, tho. The following quote was taken from this website:

Human faces come in as many sizes and shapes as there are people. Gender, ethnicity, age, hairstyle all contribute to our individual appearance.

There are some guidelines we can follow in drawing the face. No rules, because no rule would apply to everyone, but basic similarity that we can use as a standard.

The cranium is basically round, with most of the face and jaw tapering down to make the head eggshaped.

Lightly draw a center line, and bisect it with a line halfway from the top of the head to the chin. Place the eyes on this line with one eye space between them and one on either side.

The nose will end halfway between the eyes and chin, and be about an eye’s width.

The mouth is approximately halfway between the nose and chin, with the corners of the mouth in line with the pupils of the eyes.

The ears are the same length as the nose from bridge to tip, and line up with the nose horizontally.

A picture accompanied it: 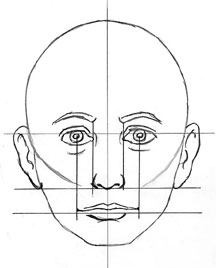 Certainly not the difinitive authority, but a good tutorial, nontheless.

My first impresson/take on her is that her facial features (eyes and nose, in particular) are slightly too large for the overall size of her head, and are too high up on her face. The bridge of her nose (right between her eyes could be narrowed (pinched) a little. Maybe making her eyes just a little smaller/closer together would do this? The colors and textures are very nice, tho! She looks great so far!

Thanks for all the comments…

BgDM: you’re right , head is too round, it wants some modification:)

Giangmatrix: no blueprints or photos, only my own modeling(it was mistake maybe…)

very nice mesh! the upper half of the head could stand to be a little taller though. Good job on the ears.

very nice modeling and textureing
the only things that i might change are the proportions of the face
i would make the chin and jaw/nose shorter, bring up the bottom half, make the nose a little smaller, and the mouth a little bigger
i tried it using the photo i hope you do not mind.
look forward to seeing progress, again great color on the texturing.

hi Blitz… nice work so far. The mesh you’ve got between the nose and lips isn’t workable, IMO… and is what’s causing it to look weird there. Only need the 3 middle edges to create that indentation above the lips, 4th edge should connect to nostril, 5th edge to outer side of nostril. Also the space between the nose and lips seems too much.
Lips are looking a bit weird to me. Maybe too wide? How does she look in profile position?