This is my first post here although iv been blender for a little while now, advice needed on how to make it look more photorealistic, im going to add forks spoons and napkins and fix the back window. 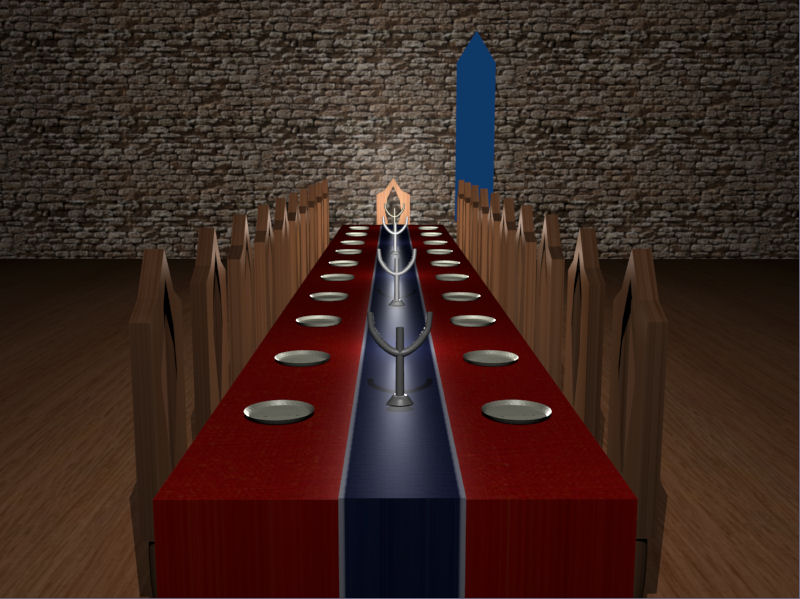 Looking good, bevel the edges on everything, it’s all really sharp especially the table. The spectra on the tablecloth is too shiny. Try adding an HDRI image and rendering in Yafray, could try using some Ambient Occilation too. Good work so far!

ty for comments so far 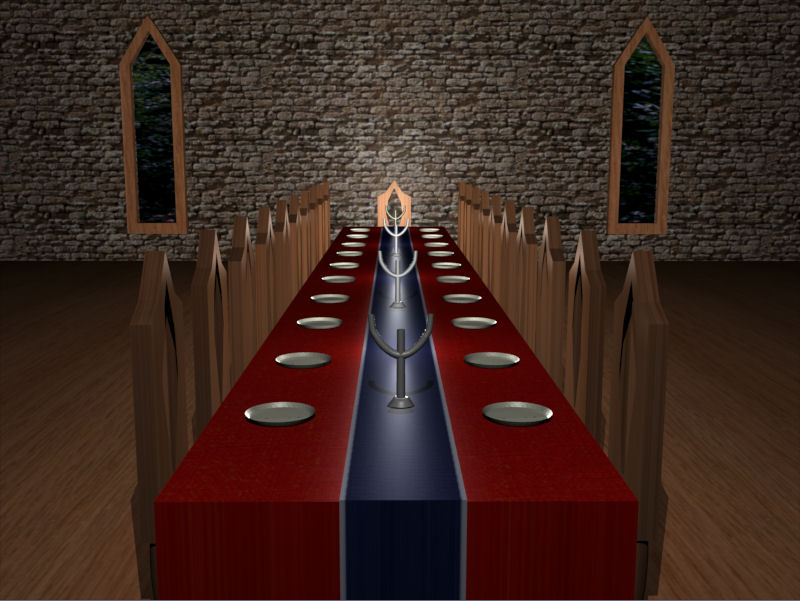 A good image? Yes. Photorealistic? No.
To make it photorealistic, you need dirtmaps. I think. Nothing in real life is totally clean, so to make it look more realistic I think you need to make it slightly dirty. I also think you need to play with the specularity settings to stop everything being so shiny, and perhaps work on the lighting. But I have never, myself, made a photorealistic image so I may be giving you utter rubbish.
Apart from that, it is looking good and I will be looking forward to the final image.

in a real scene the chairs would probably not be aranged in such perect rows I would move them around a very small amount. the table cloth looks good try adding some wrinkles at the corners. the dirt map will help to. over all a good start.

add a bit of reflection to the plates

A nice concept. I would:
1-Follow the comments made above
2-Add your plates and silver ware
3-A a big fat roast pig with an apple in his mouth on the table.
4-A lot of ale
5-If its a possible, some armors or shields on the walls behind. Something to fill in the void.
6-Candles

Ok, updated the pic and still need some C&C 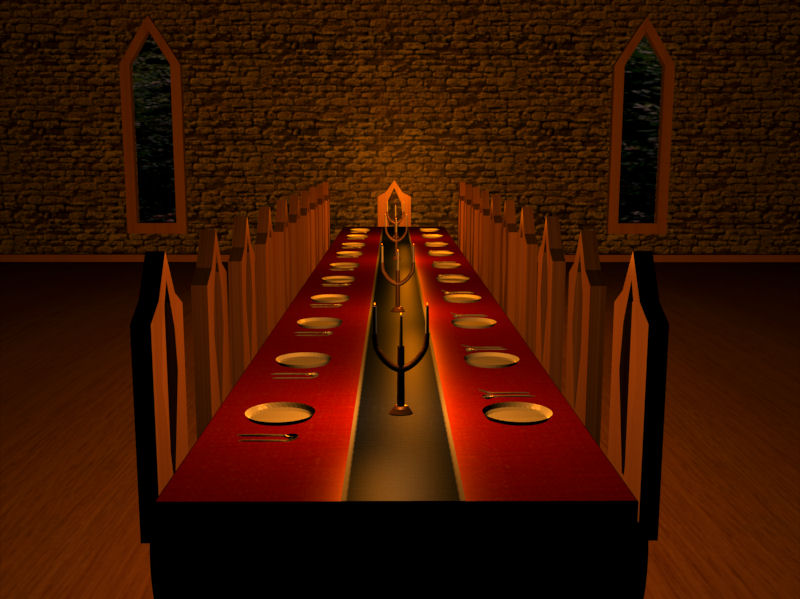 I don’t like the last update. Perhaps you should have used volumetric light emitting from the candle holders? Also, no one in their right mind would make a castle out of such small stones.

I like the idea of using light to direct the viewer’s gaze, say toward the throne at the end of the table, but it seems rather overkill to me to have the plates, as they do, appear to actually emit light. There should simply be some plausible source of light, gently illuminating the tabletop (thus drawing my attention first to the table), then slightly more illuminating the throne (so that my eyes are drawn to rest there). Because the new picture does have a well-established course for my eyes to follow, as well as warm, pleasing tones, I find the second photo more satisfying than the first.

Depth of field can be a useful feature for a shot that’s supposed to imply depth. I don’t know how pleasing that would be in this situation, though… it depends on how strongly you want the viewer’s gaze to be directed at one point.

Another thing to think about is, try moving your camera. (That is to say, create another camera, switch to it, and fool around with it.) Experiment with your lens. Think about the rule-of-thirds. Try closing-in, shooting up or down, left or right. Fool around a bit. Right now, the frame is exactly bisected by the line between wall and floor, and the throne is almost-in-the-bullseye. Where else could you put your camera? Do you want to emphasize the throne, the place-settings, the volume of the room, the window? What story do you want to tell me about this place and the people who live in it, without words? What feeling do you want me to come away with?

Hehe, I’m of the opposite opinion here with it comes to the tone of the image, I think that it’s ruined what you had going. If you were to dim down the overall ambiant light and give your candles small lamps at low power you would create a more realistic lighting scenario, and if you need more ambiant, off camera, above you could creat a series of lamps that could represent a candlabra of lit candles that is used to light the whole room a bit. Give it a bit of AO with low energy as well, that should help with increasing your shadows and more focus the attention to the lit areas of the table. As for the meshs in the scene, it doesn’t look like much has changed really.

Certainly, as Khnum says it would be a good idea just to give Yafray a try. Works amazingly on transparency and metal-reflection handling; just take a look at this humble sample.