Kirsten, is learning to animate

I figured that seeing as this a blender forum and I am a blender user, what better to showcase my very bad animation then this forum. How do you suggest I share animations here?

Upload to YouTube and embed a link. Most popular option anyways.

Thanks, I will do that.

Welcome to the forum, and looking forward to seeing your animations.

Thanks for the welcome.

So here you have it my first animation that I am sharing here. I am not happy with this at all and will be uploading a better shortly.

Thanks for the welcome. Here is my first share. What are the suggested settings when rendering a animation for youtube?

Those settings look fine. And that’s quite a respectable effort for starting out. Nice one. In terms of rendering all I can suggest is adding a frame counter. It can be quite handy if you want to get feedback.

Before offering any critique, what’s your workflow like? Best to get that sorted out first, otherwise trying to learn can be quite frustrating. For example, are you familiar with the concepts of keys and breakdowns? Do you know the difference?

I think it’s very good, especially for a first try. Keep up the great work. I think the best way to learn is to experiment, and see what you like the best. And just don’t give up.

Nice start. From here, you might think about what she is looking at as she walks - maybe track some point on the ground for a while etc.

@@Bender007
I for one could use a bit of a more in depth explanation on that… (Keys V.S. breakdowns) any tutorials on this? :yes:

Keys vs. Breakdowns - I’ve not found any tutorials that cover this specifically, as it’s more related to workflow and good practice rather than technique.

The best explanation I’ve heard was from Eric Goldberg (follow link, 4th video down), and he learned it from Ken Harris… The way he describes it, the keys are the “what you’re doing”, and the breakdowns are the “how you are doing it”. So generally speaking you’ll work out your keys first, these are usually the poses that need to read clearly and/or will be held on screen longer (but not necessarily the extremes). Next you’ll do the breakdowns, which will be between the keys. The breakdowns are important as they will define how your character moves (style), as well as create your overlap and drag (technique).

Unfortunately I can’t find any good drawings offhand to illustrate this idea, but Keith Lango has written a very thorough explanation of how breakdowns work here , so I’d start with that.

Hope this helps, if it’s not clear let me know.

And while we’re talking about workflow, it’s probably a good time to mention interpolation, or rather why you should have it set to constant until the last minute.

Here’s another workflow discussion, the outline of the pose-to-pose method is the way most people will learn to animate. Bearing this in mind, to begin with I’d recommend avoiding the layered approach (as it’s much more complicated and therefore much easier to screw things up), and also the straight ahead method (as this requires some experience to get right).

As you can see, there bulk of the work involves developing your keys and breakdowns. Inbetweening (CG - read “interpolation”) doesn’t happen until the very end. This means your animation should work without splines. If it does not, turning them on will only exacerbate your problems, and make it extremely difficult to critique/fix.

p.s. Sorry for the thread hi-jack Kirsten. How’s the walk cycle coming along?

Just to clarify keys & breakdowns, here is a quick and nasty example. Say we have two keys; the character is facing right, and then turns to his left. There are practically an infinite number of ways he can do this; I’ve picked two and butchered them, but hopefully it illustrates the point. In both cases the keys are the same, but the breakdown changes the tone of the movement. In the first case the hips lead, the head drags behind and the left arm begins to describe describe an arc in front of the body. In the second case the body coils up in anticipation, and the head is leading the movement.

This would be more or less your first blocking pass, and the style of your animation should be starting to come together. The next stage will be to go through and add in more breakdowns to develop your overlap etc.

That is essentially the difference between keys and breakdowns. 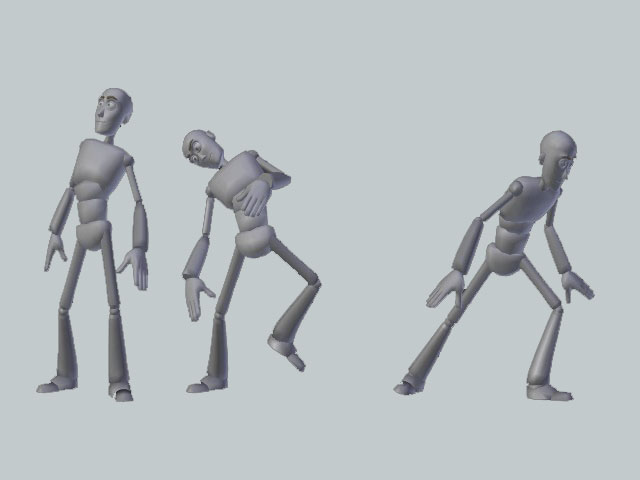 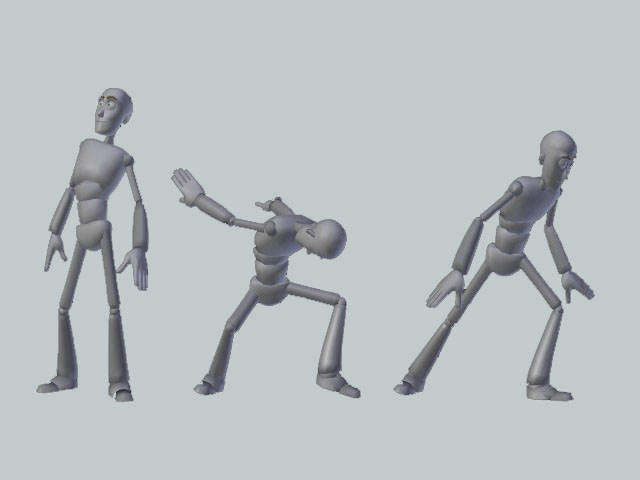 Thanks for the feedback, guys. Bender007, no problem with hi-jack as it fits in with the tread anyway and I quite happy with people having discussions and asking questions in my thread. I have a question about basic setup of lighting and camera, what is a good setup ? At the moment I am just guessing and not really understanding how it works. How did you get all the poses on one image, like your example above? I am thinking that I maybe more active here rather then 11sec club, as seems 11sec club to be more maya inclined.

Walking is coming along slowly, as other things got in the way.

Depends what you’re doing! If you’re animating and it’s only at the blocking stage I wouldn’t bother. The lighting you’ve used above works perfectly well for the animation.

However if you’re thinking about doing something for a final production, this thread is as good a starting point as anything else.

Lighting tips from the Masters

What do I know about lighting after all? After my previous post on setting up a three layer SSS shader, a few people asked for tips on how to light their characters to best show them off. As it hap…

In the renders above, there are in fact no lights at all. They’re just an OpenGL render, as in this case it’s much quicker to process and I didn’t need it to look too fancy. The composite was done in Photoshop in about 5 minutes… I really didn’t put much effort in, it was just to try and illustrate a point. So no clever tricks here, just laziness.

I’d also stick with the 11 Second club if you are serious about animating, only because there is a lot more experience on their forums. The 11 second club is populated mostly by professionals, here it’s more likely to be casuals or amateurs, so you’ll generally get better critiques over there, or at least more of them.

Thanks, Bender007. I have a look at the link. I feel that I will most likely been jumping between the two forums as they both can help. I have been rather nervous about posting on both forums but I am realizing that if I don’t I am not going to get the feeback and knowledge I am after.

Wow… thanks for the great info Bender007 … I’ve done alot of 3D stuff over the years and never had much chance to do what I always wanted to do and that was Character animation… so thanks for this… man it really is great stuff!@Bender007

Kirsten - You shouldn’t be nervous. People on forums generally want to see you succeed, and are happy to help. The hardest part is getting started, only because it’s a bit of an information overload and it’s hard to know which questions to ask, and which critiques are useful and which are just someone’s opinion. Just remember you’re having more fun than any haters out there and you’ll be sweet.

Thanks, Bender007. I am currently working on a walkcycle and there is no doubt that I am having a lot of fun watching my character move either if it looks strange at times. Now, I have access to my own dropbox what fileformat should my rendered animation be, so that people can step through it?

MOV files tend to be popular, as Quicktime lets you frame-by-frame without any fuss.