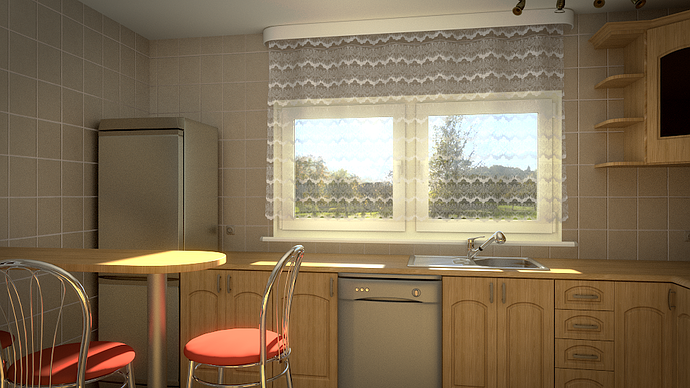 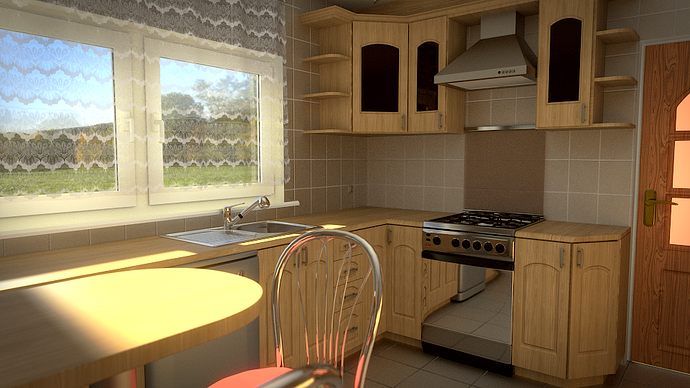 I’ts looking good. Can you tell something about lighting the scene? What kind of lights you used etc.

I tried to keep it simple and see if I can light the scene without too many cheats. And so there is the environment lighting. One mesh light that serves as the sun. It was very dark at this stage but insdead of adding any other lights I just enabled AO which has done the trick I guess.

To be honest it is my first “proper” interior rendering so if there is anything I can do to improve it please let me know.

One thing I’d suggest is that the background image could do with over-exposing a bit - that’s if you’re trying to create a scene that looks like it’s been taken with a camera. Interior exposed = exterior over-exposed or vice versa.

sorry for the Klingon

and thanks for the hint Jay-artist. I’m gonna try it.

I think I might have overdone it. What do you think? Aside form that I have tweaked a few materials and added something to drink as it seems hot outside 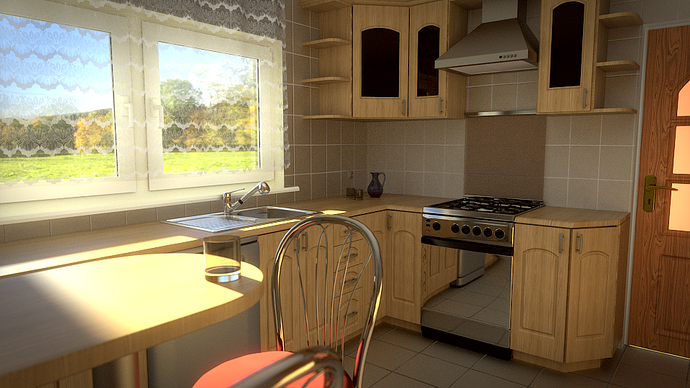 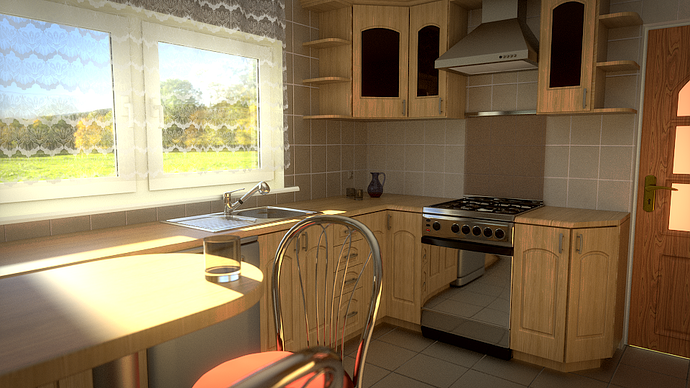 I’d still add more exposure and decrease the saturation to the outside background - it shoud be nearly white (grab a digital camera in your home set it to auto and watch through the rear/live screen as the camera tries to hunt for the correct exposeure).

The oven steel/chrome is a bit too shiny for my taste and two small things, or rather large things, the door handles and the glass look slightly too big in proportion to the scene. I like that the AO makes for a clearer image - haven’t tried that yet - roll on 2.63 today for me

All in all though predatorkind good job!

I am gonna leave the background be for now as there are a few other things I would like to tweak.

About the scale, the door handle was indeed out of scale. The glasses to but they were too small to be honest. Probably it is due to the weird focal length I am using: 22.0. The glass in the foreground is exactly the same as the ones standing near the cooker. Should I use a different focal length?

The cooker for me looks exactly like its real life counterpart but I’ll see if tweaking the materials a bit improves its looks. I’ll post an image with the items scaled properly soon.

AO is great as if it wasn’t for it I would have to probably put a few more lights in the scene to make it lit well. Right now I am trying to see how much I can lower clamp in order to introduce some caustics and still get an image with no fireflies. The problem is I am getting this weird result. Everything is the same as previously just clamp reduced to 0.5. 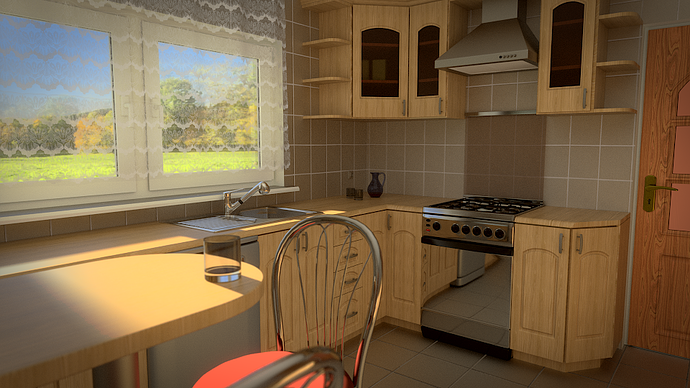 Duno if you saw my interior blends on blendswap, I was trying to get the exposure for the exterior set up the best I could by faking it, which is from what I’ve learned lately, is the way others do it it Luxrender and Yafaray. some people just leave out a background altogether and just have it set as white as the glare can be so strong unless the window is massive that nothing is visible outside. With the Blender Cookie (Johnathan Williamson) Archviz tutorial he did last month his windows were massive so he didn’t have to worry about that aspect much, but it’s a shame he didn’t go into that detail as I think a lot of noobs out there might not realise - so yeah, I don’t want to go on about it needlessly, but it appears I am lol

I guess the glass seems big because there is nothing to reference it by in the foreground, the chair is only partially visible, is it under the table/worktop or behind it? and I think that’s what maybe throwing it out.

For my interiors I set my camera focal length from 20, 24 to 35. It really depends on how close your objects are to the camera though, closer they are the more noticable the distortion is I guess. A wide angle lens is the norm for most architectural photographs to get more into the frame as you’re probably aware - so I’d stick with it - maybe you could add some more objects next to the glass or pull the camera back a little?

Nice to see the wip though, Jay

Now where is 2.63, thought I’d wake up to a new download this morning - not there yet, maybe Bmesh is broken… oops! 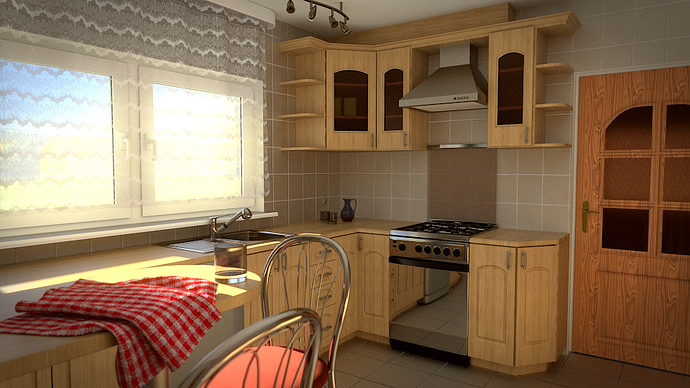 Another render. The texture on the door reveals its flaws now unfortunately.

The chairs are a bit taller than the worktop.

Since I am not a citizen I do not have access to the archviz tutorial series. There is a nice tutorial on modeling and rendering a breakfast hall on blendernerd too. I think I might add some volumetrics to my sun light. 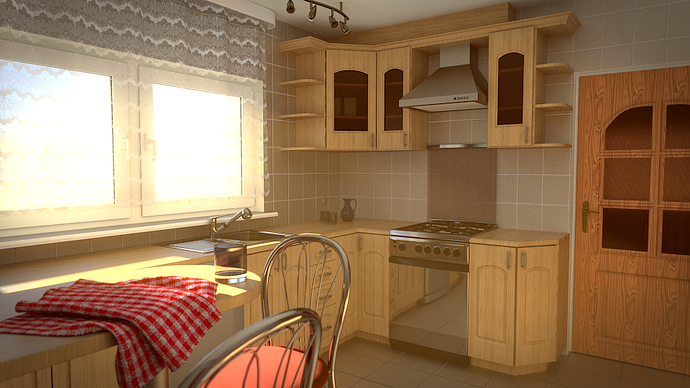 Well done predatorkind, the window is much better now and I like the cloth on the worktop - did you use the cloth simulator? I know if I had, it would have fallen off countless times trying to get it to stick to the surface.

If you don’t like the door texture, why not use the cupboards wood instead, it would then match nicely.

I liked some of the Blender Cookie Archviz tutorial (signed up for a month when it came out) - was a very hefty set of tutorials and a lot of GBs. I didbn’t follow the tutorial for my scenes as it was a lot of work for the compositing which for my scenes it wouldn’t have added much.

Thanks for the kind words and your help in bringing the whole scene to this level.

I did use the cloth simulator for the cloth and believe me it took mi quite some time before I was happy with the result of the simulation.

I tweaked the texture on the door so that the tiling is not that visible. And I lowered the saturation of the cloth texture so that it doesn’t draw so much attention but I dunno if that was necessary. Here’s the result. 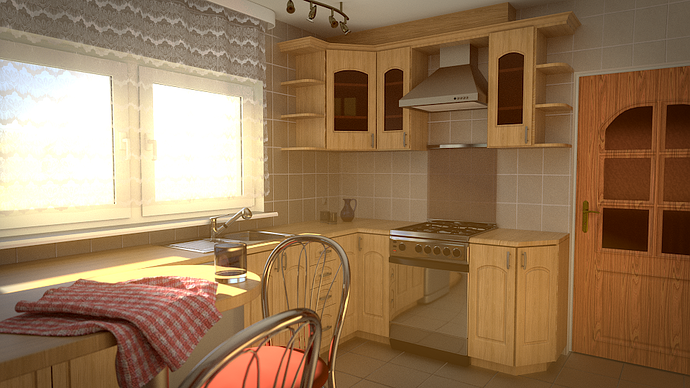 Those tweaks were nice additions, glad to have made some use with my CCs - now for you next Interior!

From a nice scene came out a very interesting thread. Thank you.
Am I right in presuming that the relatively high exposure helps with the clamp value? Clamp of 1 is often used to reduce artifacts, but a side effect is a dark scene, as we often see in recent automotives, made with Cycles.

Without clamp the scene renders very noisy. AO with a relatively low distance setting lightens up the scene even if in a somewhat artificial way. Some pro lighting setups could probably do the same trick but I guess why waste time. The problem with clamp is it destroys detail.

I’ve just downloaded 2.63 been playing with it today - Clamp seems a good idea, but I’d rather throw more samples at a scene than use it. It totally destroys highlights and flattens the image. An inteligent clamp with some algorithm to just target fireflies would be much better - early days yet though I guess