Hi everyone,
Here is a little kitchen that I started last year. Put it aside and did not return to it until yesterday. There’s still a lot to do.

Modeling is done with blender 2.64 and rendered in Yafaray. Some issue arose when I tried to render it with the last stable release. 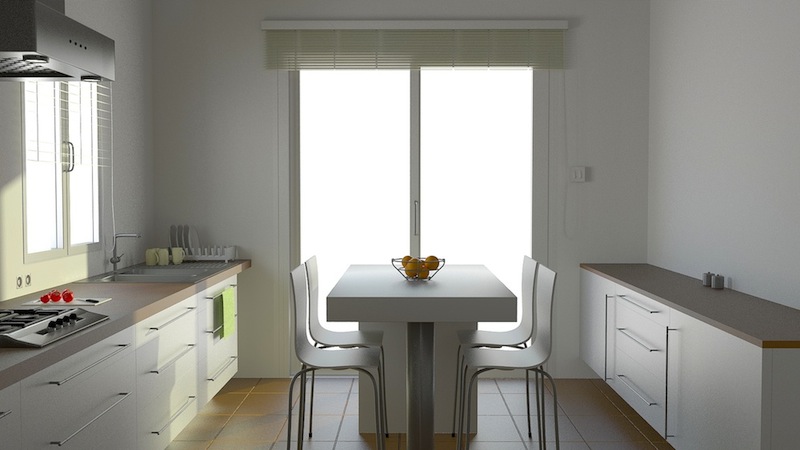 First thing that pops into the eye is the noise artefacts in the top left corner. Increasing samples or doing some post-render image editing can fix this.

The window on the left seems to have blinds in front of it, but due to lighting and position they don’t look realistic. Change lighting/change its material/ change its rotation to make them look more real.

Awesome !
How about a big painting on the right wall which is a little bit empty ?

Thanks for the comments. Good idea Acromartsu, Ill give it a try for the blinds.

I did not let the render go for too long, 5 hrs. The original image file is about 2000*1200. For the final render I let it do at least 3 TIMES the number of passes for that test. Its should take about 6 to 8 hrs in all.

Thanks for the idea Zakousky. Theres a lot of details that are missing. Time is lacking to work on it. And I am not what you can call a quick modeler.

That could be interesting, rarebit. I seen artist here pull really great pictures with Cycles. But for me until now its been easier with Yafaray.

Again thanks for the comments. I would like to know what you guys think of the table of the kitchen? I had another version with a normal table and you could see the door behind. Do you guys think its ok like its now or hidding too much of what might be behind?

Nah i think the table is a good choice if there were less of it the chairs would be completely lost in the back lighting from the door. It’s elegantly done but I don’t think i could live there XD. I’m not sure if it’s because the counter top it a thinner material or the minimalism of the whole thing but the counter on the right seems a little low or it doesn’t quite balance things out? It looks out of place for some reason.