Knight with 411 faces for rigging

Hi all! I’m moving forward on my self-education, and after struggling with that airplane for a week, I decided to move on and start creating my first rigs for human animation. I started with a severely low-poly monster based on the original Quake (100 faces only!) and today I created this little knight with about 400 faces. I know, maybe in the future they will fight? 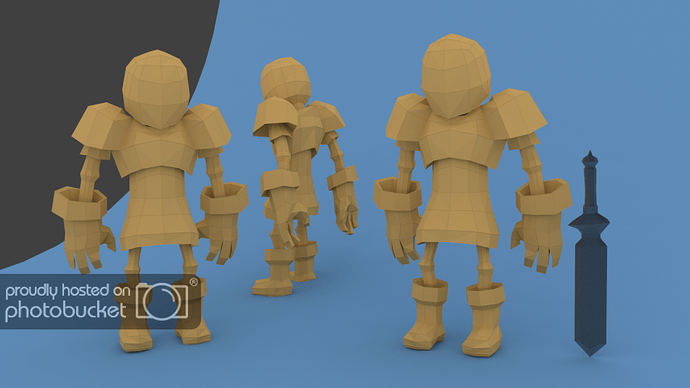 I checked all the edge loops and they seem to be in order. No triangles anywhere either. Next step would be rigging and creating controllers for the bones, and then animation. Not sure if I’ll UV map him yet.

Any suggestions before I start creating the bones?

Also, anyone has strong opinions about whether I should make the UV maps before or after rigging?

Looks like a fun project. I don’t think it matters when you make the UVs, but I would do it after so that you can check to see if there is any texture stretching when you start playing with the armature.

Thank you for your input Safetyman! I’m doing just that, figuring out the weight painting first and learning to use the bone system. So far so good, I decided not to use IK and focus bones for the joints, at least for now, I’d rather learn how to animate first and later if I need to refine this system I’ll go back to it.

I’m almost done with the weight painting, just need some more tests, and I’m also adding some bones to the fingers:

Welp, here it is… my first Blender animation…

UPDATE: took the time to play around with the animation a bit more:

imo, you should add more twist to the upper torso, while keeping the head facing straight forward.