Having finished the Battle Dance project, Its time to start a new one, one very related to what I have finished. “Kroot”
I’ll just need some comments and critiques to point out what I cannot see. KTHNXBAI! 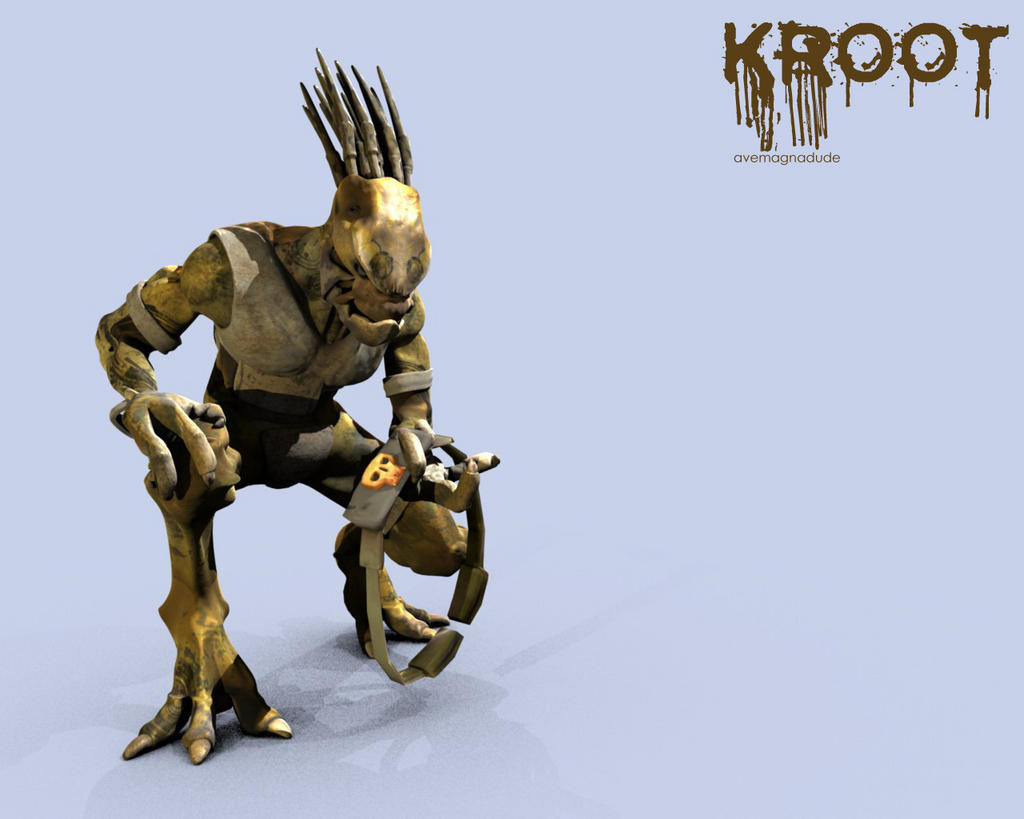 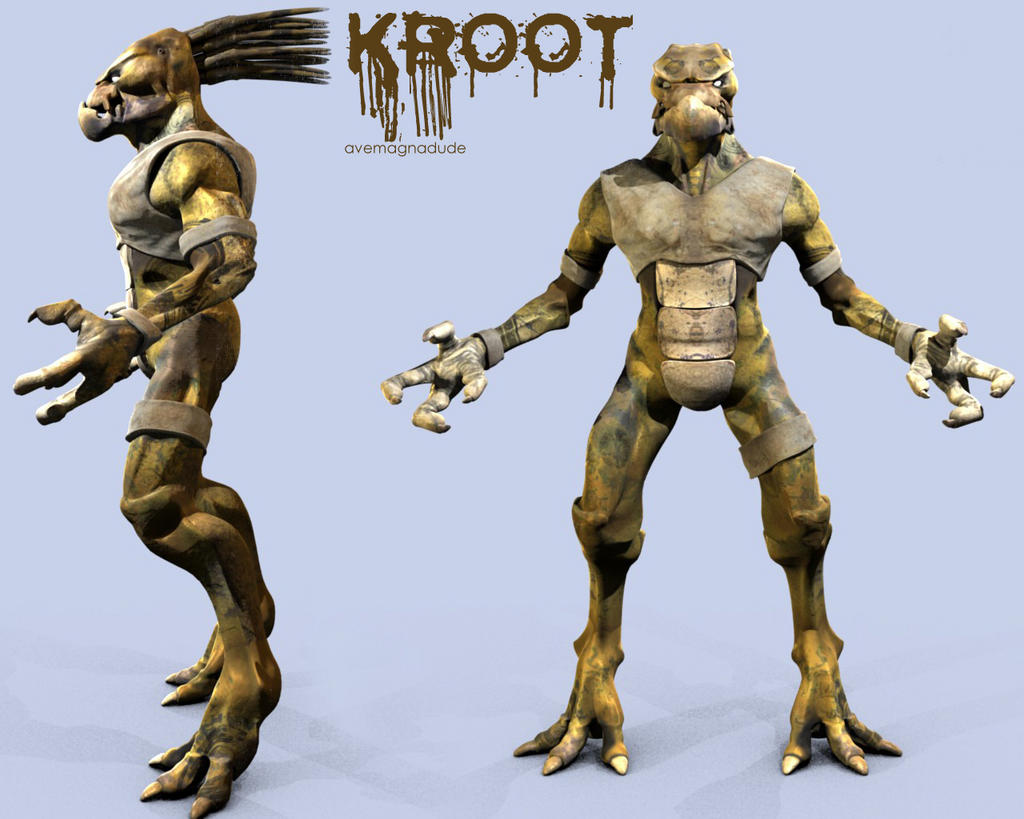 Looks awesome! But I’m not sure if the hair (or whatever it is) is a bit more spread out. My friend is collection Tau and have some kroots, I think the hair is going a bit more down too.

Model is good but texture is so weak.

Model and deformations look good. Not sure about the lighting/textures, but still really nice.

When accepting crits always consider the source, I think your textures look nice, the character has an oddworld look to him. http://www.gameplayertees.com/wallpapers/main.php?g2_view=core.DownloadItem&g2_itemId=1425&g2_serialNumber=3

With varying critiques on the textures, here are some pics of a close up and a change of lighting. 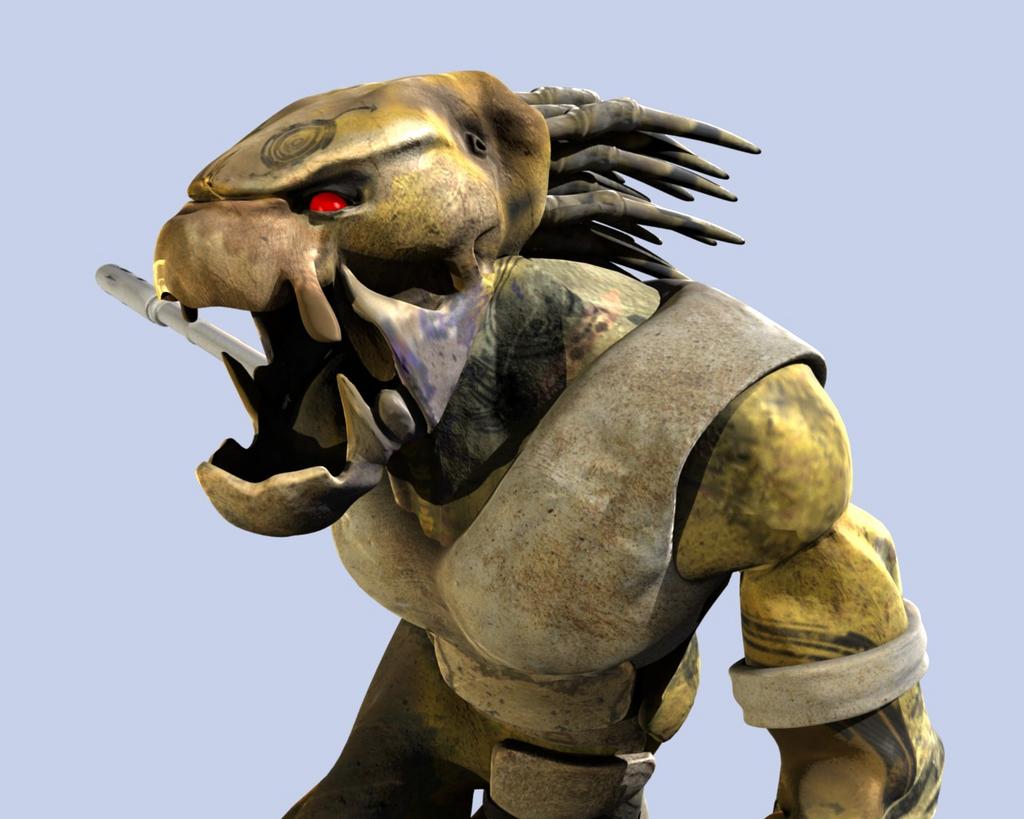 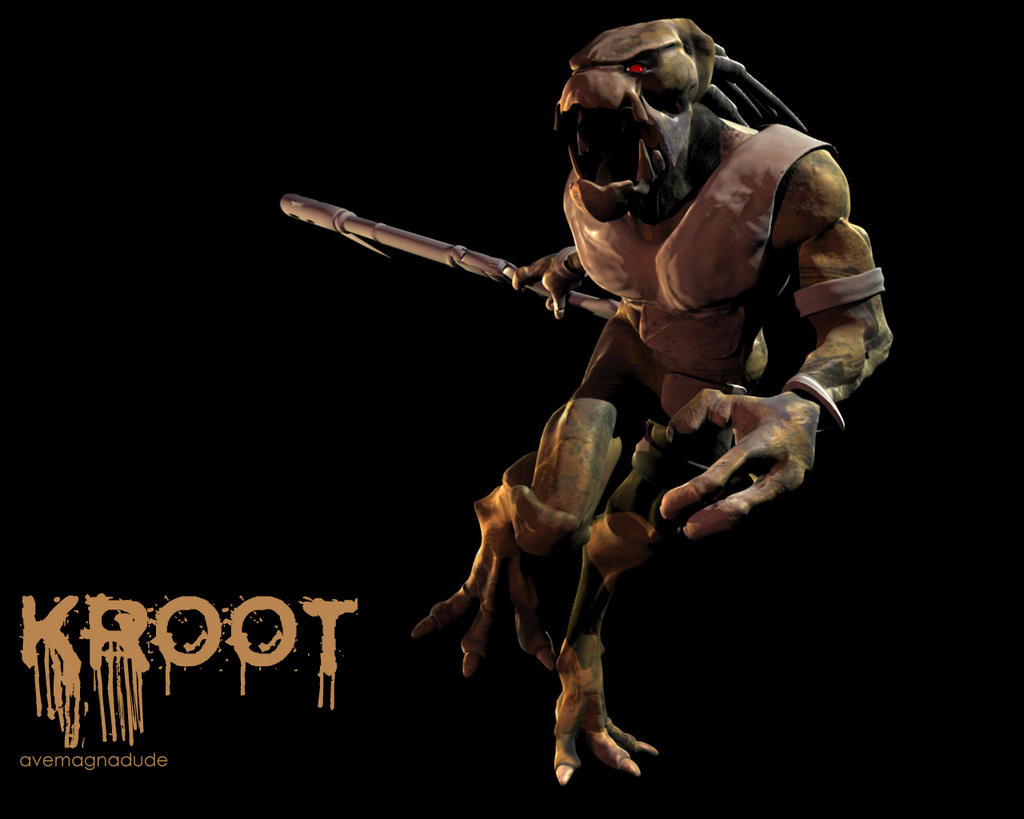 Cool, I really like the overall design. So whats he for?
As a total package he looks pretty damn good, but something is coming across as kind of plain with everything being at the same “color intesity” and I have no idea why this seems to be the case or how to suggest fixing it.

Due to the color strength being so similar its actually hard to see some of the details in the textures (like the tattooed arms or the different localized color (such as on the thigh, the knee down, the jaw, etc.)

the model is amazing!! i played 40k for a while and i loved the tau, this makes me want to make some of their units in blender! ok, like i said the model is amazing, the only thing i can find wrong with it, is the head spike things, they should cover the back-top of his head some more, but not as thickly as in the way back (where you have them now) im rly sorry if that didnt make sense, i also agree with jessepg, there is something off with the whole coloring, i like the textures actaully, cuz i can see tatoos and stuff, and i think it works for a kroot. keep up the awesome work! you should feel proud of yourself for this, its far beyond what i could do.

Thanks guys!
@Kronecker_Delta:
You better! xD

Looky my avatar! Its gonna get you! xD

btw, this guy’s for learning purposes and shall not be made of ridicule, he’s a lil baby after all T.T
In the near future, he will battle amongst theSpeshMahreen and the Owk in search for glory.

Why? No one likes my avatar?
Oh well, update! The gun is textured and i have change some color intensities using black and white maps and setting them to multiply

I added some armor too!

Time for some poses! 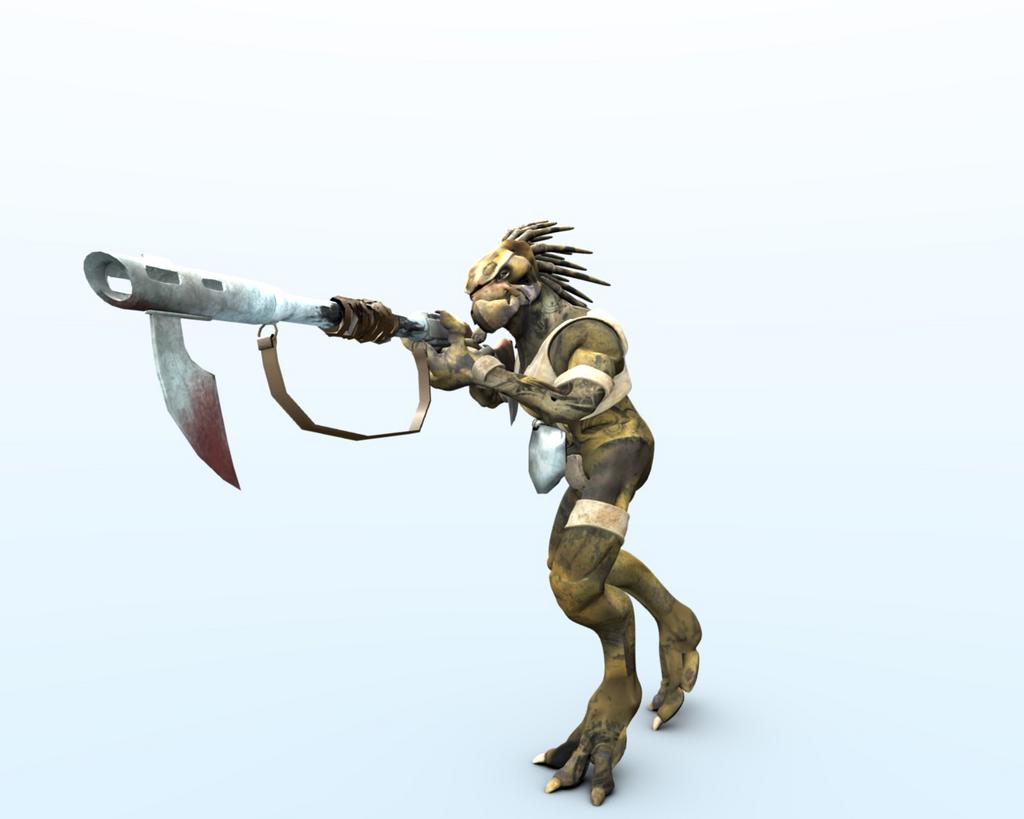 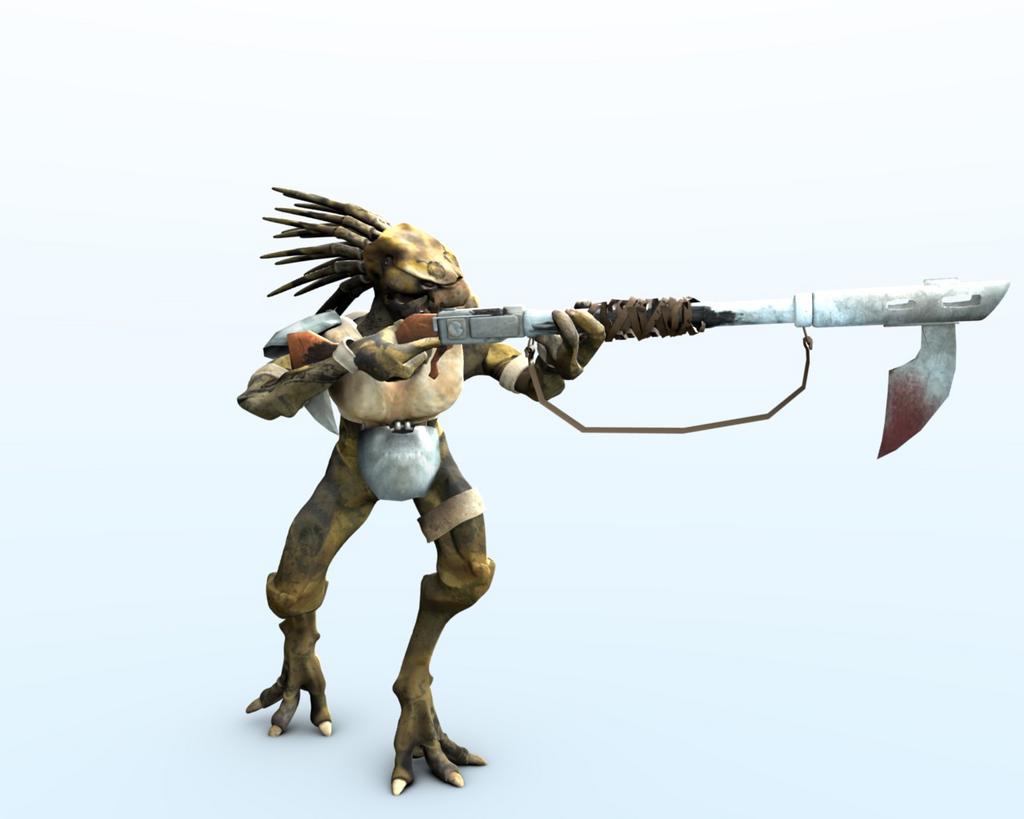 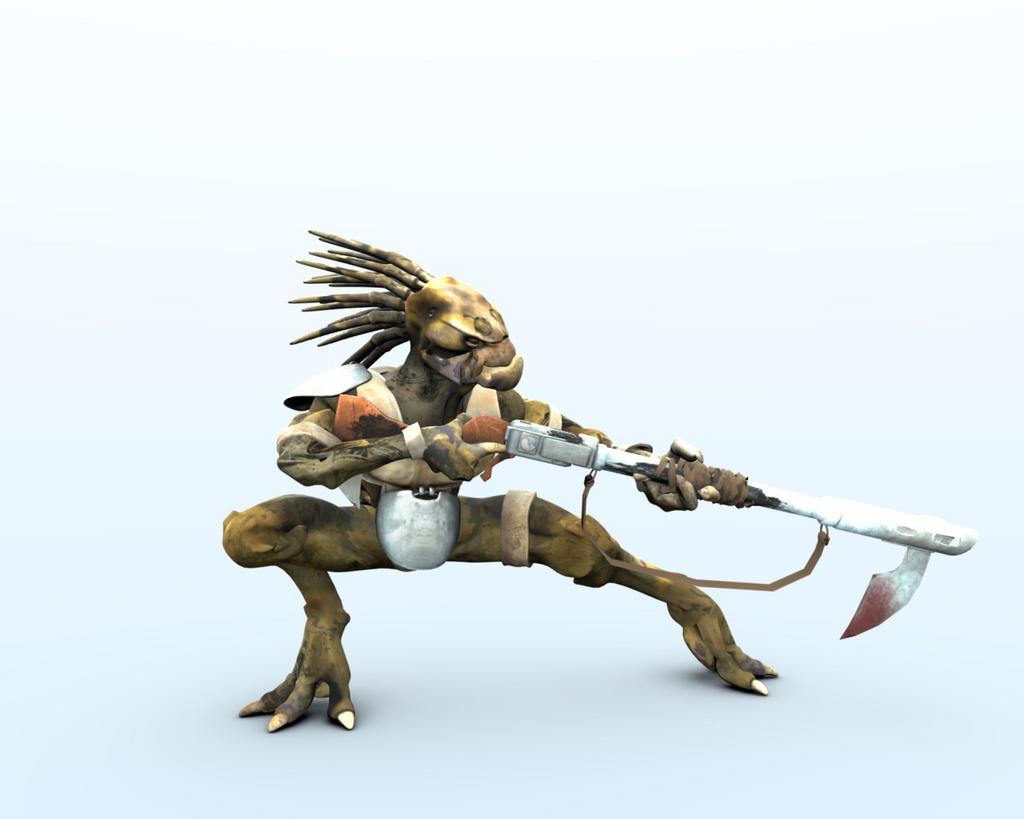 Your Avatar is cool dude. Whats cooler is that third pose you made with him crouched down, ready to snipe. The legs look graceful and the position of the toes is well done.

I have replaced the textures with new ones, more detailed ones, and I’d say he’s ready for the close ups! LOOKY! 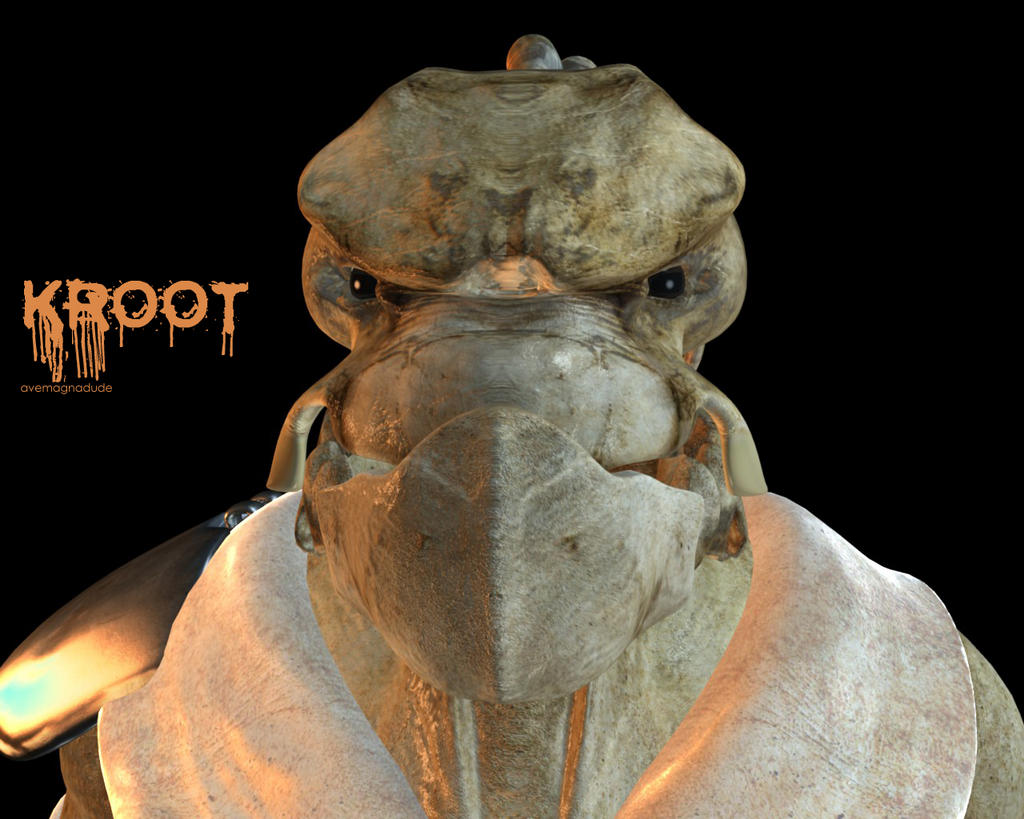 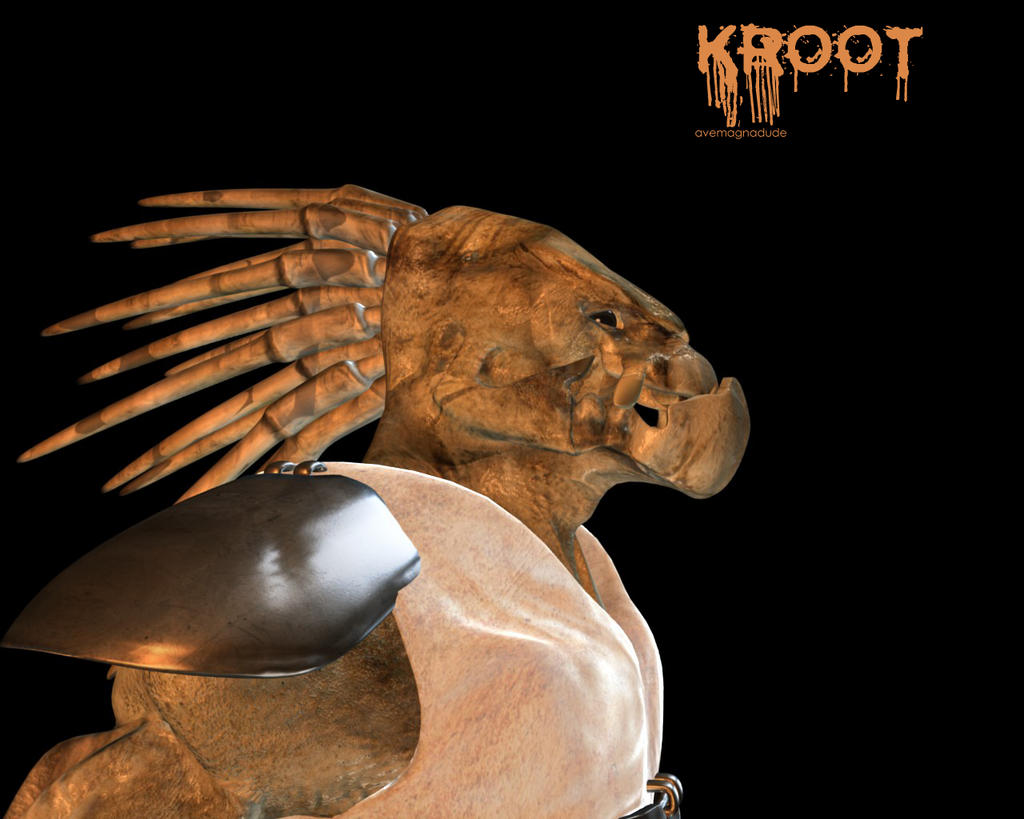 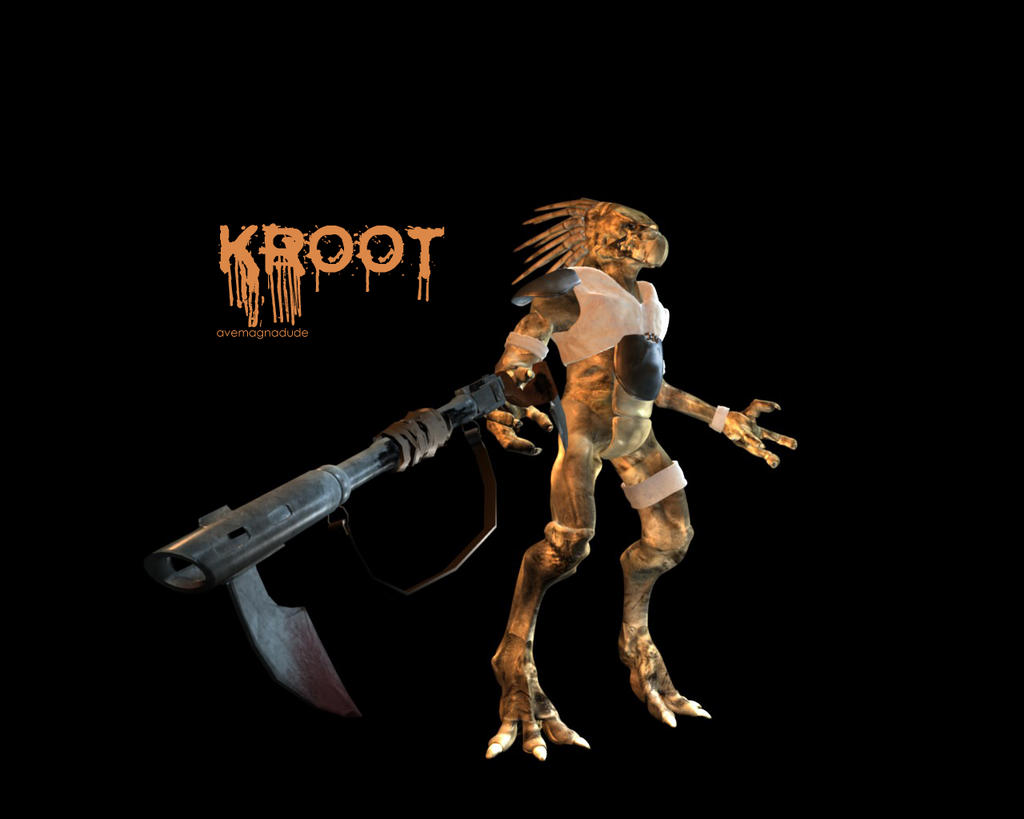 I don’t know what to say,

This is really sweet. Keep it up.

What say you? It is midday in Frohmania and I think this piece is finished! Shall I add more things to the scene? What would you like? Anyway, KILLER KROOT KOMING AT YA!!! Another BIG ONE! Tell me what art thou be thinking! I’d run away if this guy was coming at me! I agree this piece is almost finished, but maybe more work on the gun strap (little blocky make it cloth maybe). Love the angle of the shot showing off the blood on the blade. The detailed textures on his face are awesome! Integrating the lighting from your background pic onto your model adds the final touch. I’m surprised more people haven’t commented, I’d move this guy over to finished projects soon if I were you. 5 stars from me.

Very very good work. I am thouroghly impressed. They look almost lifelike. I myself am working on necrons in blender and have already created the Monolith, a tomb spyder, attack scarabs and am currently working on a wraith. They are nowhere near your standatd but then again I could never creat something like what you have done. 5* from me.

the character is looking awesome but I think the gun still needs a bit of work, the back part of the blade (the bit facing him) just doesn’t seem right, as if it’s some kind of modelling error, same as with the tip of the blade. Also his right hand forefinger looks like it’s penetrating the stock of the gun. The hand guard looks a bit “stuck-on” and the strap really needs to be either smoother or look like its made out of pieces to pull off such sharp corners.