I’ve been trying to rig this part of a landing gear (see photo), but I’m having major issues…first and foremost I’m a total newbie in the rigging department so of course it has turned into two weeks of watching rigging tuts and to be honest it’s all turned into a great jumble in my head.

All I’m interested is if any of you guys would point me in the right direction into rigging it with the least of hassle and troubles…mind you I’ve tried using empties and constraints with various levels of hit and miss, used armature with IK and constraints more misses than hits and now it’s all a confusing blob of information and terms. 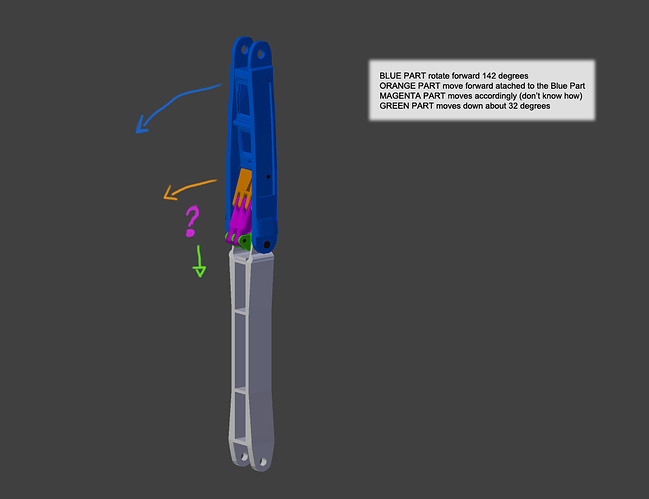 I hope it makes sense of what I am after, the part that is really playing havoc with all is the pink/magenta as it pivots in two points. Using empies and constraints I’ve managed to make the blue part rotate and bring the orange one with it, also the green part I’ve made it rotate with an empty and rotation constraint, but the pink one GRRRRRR :spin:…thanks in advance for any pointers

Have you seen Blender Cookie’s new course on rigging a jet? The free introduction lesson explains using empties, parenting and constraints, however the landing gear rigging lesson is only available to paid members (if you like the introduction, you might consider joining)

@spaced, yes I’ve seen it and that’s how I managed to kind of rig it…sadly I don’t have the means @ the moment to become a BC citizen

so only youTube, Vimeo or other means of video tuts for me.
One thing that really pi***es me off is that 95% of rigging tuts available are for human/humanoids meshes but very few are for mechanical stuff and are very limited in the uses, besides I understand that there are many ways of rigging stuff, but all that it has done is confuse me in choosing one that I understand the workings and logic behind it…Thanks for the advice!
I’ll keep on with the trial and error

Looks great. How did you get the pink bit to move correctly?

@spaced, I did it the dirty way as I’m still getting to grips with constraints and all that mumbo jumbo…LOL

For the main structure I added an empty to the hinge and an armature for the three small parts (orange, magenta, green) and animated them manually (fully extended and then folded)…I know it’s not the best way nor the most elegant but at least it worked.

Getting it to work is enough

By the time you’ve rigged the rest of the mechanicals you’ll be an expert, and you can post an indepth tut

OMG!!! I’m going to jump out of a window…if any of you guys have been following my F16 WIP you might be aware that I had some file corruption and some of the files were lost beyond recovery…anywho, I discovered today that the file that I had with the animation on was lost :mad:

So decided to refresh my little to no understanding of rigs and hit a brick wall, I know that the way I made it before was the “dirty” way…as I have changed my original plans as to how I was going to use the F16 I now need a fully controlable landing gear that is easy to animate…here’s my problem, I’ve recreated the main hinge of the bracket and the armature on the three little hinge parts, but now I need a way to make that the begining of the armature(Tail of Bone 1) attaches itself to the main part of the bracket (Large blue part) and that the end of the armature(Head of Bone 3) 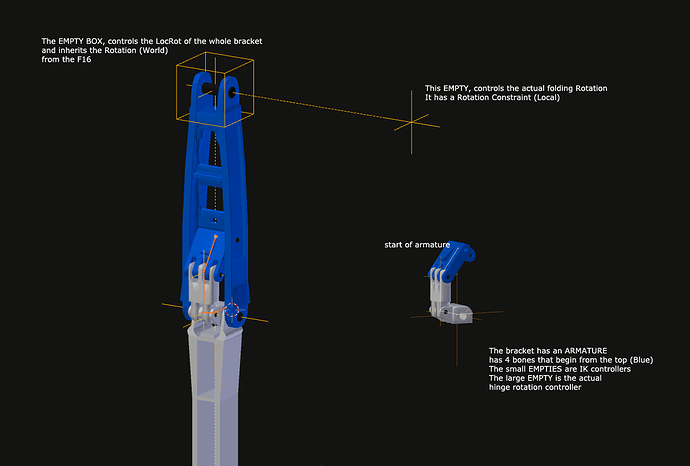 Any help would be greatly appreciated and acknoledged once I finish the project…:yes:

Here’s the blend file, for anyone who wishes to have a look at it LandingGearBracket.blend (220 KB) …thanks guys

PS. Admins I reopened this post because is still unsolved due to file being lost and getting confussed on the rigging of it

The “rigging mechanics” tutorials can be very helpful in situations like these, which I happen to deal with a lot. Usually, the idea comes down to two parts:

For instance, rigging a reciprocating steam-engine. In real life, the back-and-forth motion of the pistons drives the crankshaft which drives the wheels. But in CG, the opposite is done: the wheel turns, and it pulls the mechanism along with it, using an armature to control the motion of the crankshaft and empties (with XYZ-limited track-to constraints) to keep everything properly lined-up.

In the case of this mechanism, the primary movement … to be controlled by one armature … is the folding of the gear itself. The motion of the “little thingy in the middle” would be controlled by a second, and an Empty … the Swiss Army® Knife of all such rigging … provides the precisely-placed thing that various constraints will point to. The movement of this “thingy” is described in terms of the coordinate-system of the combined object. Although in real life this might well be a “driving” part of the mechanism, in CG it will be a “driven” part.

The Rigging Mechanics tutorial, although written long-ago for Blender 2.31, is still definitive. It demonstrates how to create a hydraulic mechanism complete with flexible hoses that flex. Although some of the user-interface fine points have changed (considerably …) since then, the basic principles have not.

Incidentally, Blender now has another very useful trick up its sleeve now: drivers. These are F-curve driven (“IPO curves” …) connections between some attribute(s) of one object that can be used to control aspects of another. Now that Blender can “animate anything™,” that is to say, it can animate any attribute that you can set, this capability has pretty-much limitless versatility when it comes to “rigging mechanics.” Yes, sometimes the easiest way is to deal with the mechanical beast as multiple things, and then use drivers … finely adjusted by hand … to get plausible(-enough) movement of the whole. Stuff that a Victorian engineer would have to deal with using complex, often-hidden gearing, you can just do with a driver.

Nevermind how a mechanism actually worked. You don’t have to simulate that. Look at each of the individual motions and break them down.

Thanks @sundialsvc4 for your reply, very informative and it has helped in clearing my mind as to the rigging approach, I’ll study and do the tutorial you recommend, which I’ve just had a quick read through and it’s very clear as to the mechanical rigging side of things, it’s a shame that there aren’t many video tuts on the matter probably because is a complex issue…who know I might end up doing one using the landing gear as an example ;)…but first things first, getting my rig to work.

It’s funny you mention the usage of drivers, last night I did a few tuts on the subject and got the F-16’s speed brakes/air brakes to open and close using drivers…it gave me a few ideas on other movable surfaces on the plane that I want to rig and animate i.e. the canopy.

So once again thanks on your insight and help.

Good news!!! got it to work…hurraahhh!!!

Animation seems to be working fine. Good job. You do need to teak the 4 bar link latch mechanism a little. In fact your very first latch layout shows the correct configuration. Two hinged plate needs to be flat in plane when landing gear locks. As it is those plates have angle between them when deployed. This picture shows the correct position as well: Thanks @ridix!! that photo has helped me a lot not only with the latches but with other parts like the join between the end of the drag brace and the wheel assembly (the bit that twists the wheel for it to fold into the storage compartment)

Will tweak it before putting it all together…is that LG yours??? if so, what’s the actual folding angle of the drag brace (once the two major parts fold)?? I don’t seem to find any info about it, not even with the RC Community

or is just a matter of eye balling it??

It would be useful, to other Gentle Readers who will follow, if you briefly described the setup that you “got to work,” as you did in posts #1 and #8.

It would be useful, to other Gentle Readers who will follow, if you briefly described the setup that you “got to work,” as you did in posts #1 and #8. 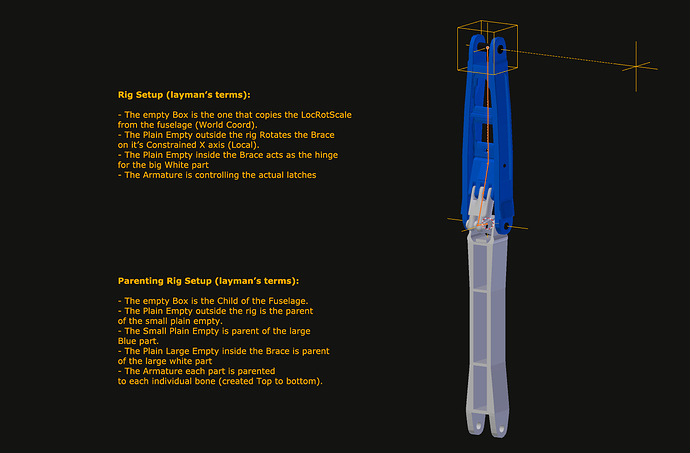 I must point out that the animation part of it I’m doing it manually as I’ve got time in my hands to do it this way, besides it buys me time to learn how to rig properly complex mechanical parts…please ppl who know advance rigging, don’t go running and screaming “he’s doing it wrong, there’s a much easier way!!!”… LOL

Two hinged plate needs to be flat in plane when landing gear locks.

@ridix I’ve fixed the latches, they are now straight…thanks for pointing them out.

I know I’m missing something essential here, but why are you not using IK? Did you try an IK rig and it didn’t work? It seems that it would be super simple to do.

I know I’m missing something essential here, but why are you not using IK? Did you try an IK rig and it didn’t work? It seems that it would be super simple to do.

First, thanks for your comment and concerns, no you are not missing anything other than what I wrote in #15, you’ll see I made a comment

Don’t get me wrong, I know there’s IK and FK and all sort of wonderful tools to make life easier in rigging, but as I mentioned before, I was doing too many tuts and got to a stage where I had a bloody mess in my head and hence the reason for this post…I wanted someone to help me clear my mind and find a solution as to a better way of rigging, but it took a few months to get some sort of useful information, not that what @spaced suggested didn’t work, is just was limited the amount of information that I could and can access in CGCookie as I’m not a paying citizen of CGC.

If you say that is seems that easy, then could you please show me as it would make my life easy…

So Sorry! I didn’t see that… Long as you got it all woked out all good.

So Sorry! I didn’t see that… Long as you got it all woked out all good.