Hello there! I am currently working on a large scale landscape inspired by Gerard Trignac. I’m having some trouble seeing what needs fixing, something seems off about the lighting, and the feeling of grand scale that I’m looking to create. Any advice on how to better achieve a sense of scale or to just generally improve the quality of the render would be very much appreciated! 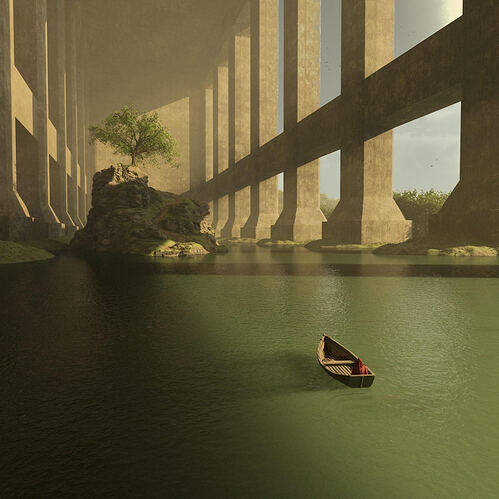 It actually looks pretty good already! Maybe try adding some bump to the pillars in order to break up those sharp edges, as they look a bit unnatural. maybe also try mixing some disturbance to the water where it meets the boat and the land as well, because it looks a little like the boat is floating right above the water rather than on it. To help with the scale, you could maybe try adding some birds inside the structure, as that could make it feel more spacious (Although honestly it already looks pretty massive and may not even need it.) You could also try adding some really small Ivy along the base of the column and in the corners, which could add to the scale.

Otherwise, I love the composition, with everything pointing towards the focal point. Maybe to make the tree stand out a little more, you could try and give it a bit of a glow in the sun, and darken the wall behind it a bit.

In terms of story, it doesn’t make a ton of sense (not that it’s really necessary). For example, how is the boat moving if it doesn’t have a sail or any oars? Maybe also adding a more obvious reason that this character is trying to get to the island, such as another figure standing there, or maybe giving it a more supernatural effect with some glow, or making it a bit magical with a more unnatural colour like blue?

Sorry if that’s a bit much, but I really like it as it is already!

I’ve sent you a file suggesting moving the island farther back and making the shadows darker in the back.

Maybe you already have, but I’d suggest playing with your camera position, angle and focal length. Don’t be afraid to deviate from the rule-of-thirds if it feels better. You might also experiment with different aspect ratios.

I’m confused at the suggestion of “making the shadows darker in the back”. I would consider the opposite; lowering the contrast and lightening the environment as it recedes into the distance.

@Strike_Digital Thank you very much sir! I’m glad you like

Thank you for all the sound advice as well! Just what I’m looking for

The sharp edges on the pillars are a bit unnatural now that you say that, and the water does need some wake where the boat is, I would definitely agree with that! I actually do have doves in the scene, they are just very… very small

Ill play around with various methods of highlighting the tree in correspondence with your comment as well! Might just mess around and see what it looks like as a moonlit scene with a color scheme of deep blues, silver, and orange! And I agree some glow and supernatural vibes might mesh well with the piece! Again, I greatly appreciate all the sound advice man!

@Boder Love it! Thank you for the focused advice! Very much appreciated.

Good to see you on around the forum again!

@Steah I have played around with it, but there’s lots of benefits to experimenting with it some more!

In my mind, I’m envisioning the foreground maybe being covered in shadows a bit more, pushing the light (and focus) more towards the tree. Am I interpreting that right? Thank you for the advice!

I’m assuming that you’re looking for a gigantic architecture. You need to look into real world photography, landscape lens, f-stop and real scales. Normally there’s a great amount of details in those scenes, even if it’s very far away. I did a render test similar to your scene, with a Arri camera preset, 35mm lens, would not capture all that. Also you’re missing atmospherics and maybe some gods rays.
Check this profile artstation.com/mikejohnson , you may get some insights. 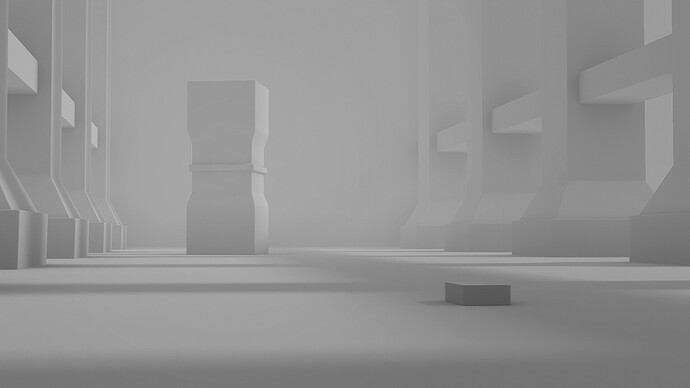 Interesting start and concept. The lighting is looking a bit off to me. The shadows have different softness and thus don’t leave the impression of sunlight. 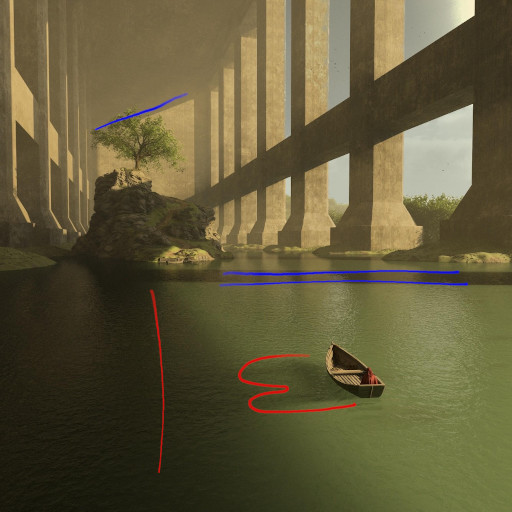 shadowLines512×512 60.6 KB
The shadows I marked with blue lines are quite sharp how a bright sunlight would cast them. However the shadow by the boat and the one of the large horizontal bar (both marked in red) are very very soft and don’t match the other shadows. Just as if they would come from a different light source, which I can’t locate in the image. I’m not sure what causes this in your rendering, so I can’t give you a concrete advice, but I wanted to let you know anyhow

Looking forward to the progress of this project. 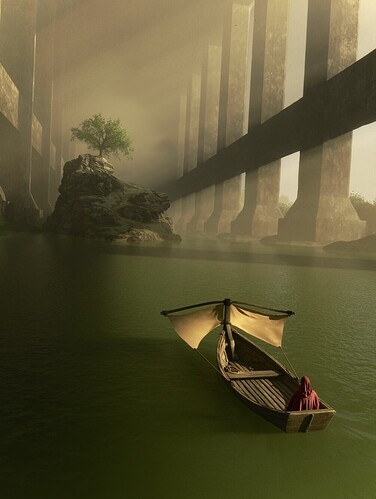 I greatly appreciate all the amazing, sound advice! I’m very pleased with how all the changes worked out, and learned a lot in the process! I moved the wall in the back just a little bit so that the shadow that covered the wall, so the tree wasn’t fighting the sharp line. Also put some more highlights on the tree, and added a kind of glow to it as well. Also added some more water disturbance to the boat wake, and added the sail system, to add some more believability to the scene. I played around with the camera angle a bit and changed the aspect ratio, as well as using a different camera preset and added a bit of lens distortion. Added a tiny bit of wobble to the pillars as well, to make the scene feel more organic. In all, the great advice really helped bring this piece much more life, and I am very grateful for it. Thank you everybody!

Congrats on finishing the piece. Happy to give feedback and see what you have done. It reminds me of some Greek or Roman myth, some epic.