INFO
This is a scene that I’ve setup for testing purposes and it’s part of my research for various rendering engines, pipelines and work-flows. At first I wanted to model fully more than one room but I didn’t have that much time.

I’m trying to find and optimal work-flow (focused on Architectural Visualizations) that could be based to FOSS (as much as possible), from start to finish.

Not all things modeled by me. Some are free 3d scans re-meshed withInstant Meshes and some are free downloads from furniture companies.
All images used in picture frames are from Unsplash.

The part of modeling done by me was done in Blender.

Some textures were modified in GIMP.

Lighting done with one Sun Lamp, one HDRI Environment and Portals placed on every window.

For the materials I used a couple of custom nodes (based on older PBR tutorials by Cynicat Pro).

CONCLUSIONS
This pipeline that uses Blender almost exclusively has many benefits.
You don’t have to move between different applications, Cycles is great for tweaking fast you materials and lighting and its compositing system worked without problems for me.

The PBR nodes gave me predictable results on every case and made modifications and testing quite fast and easy.

Contrary I still can’t get read from noise (though it doesn’t bother me that much in this specific case).
I would for sure prefer to have an artistic choice of the noise amount.
I’m hopping that Lucas StocknerDe-noising Builds will solve those problems in the near future.
(My testing with these builds so far are very promising, though buggy in complex scenes like this one).

Also I feel that 1 hour and a half is too much for this kind of images.
I’m usually asked to deliver images more than 3000px and that would mean approximately more than six hours per image on my current set-up.
On tight dead-lines this is kind of tough. Of course I could use a render farm or buy more GPU power (but that’s a different story).

Also on Post Production I’m planning to test Darktable and Natron which are both very capable and gave me great results so far. 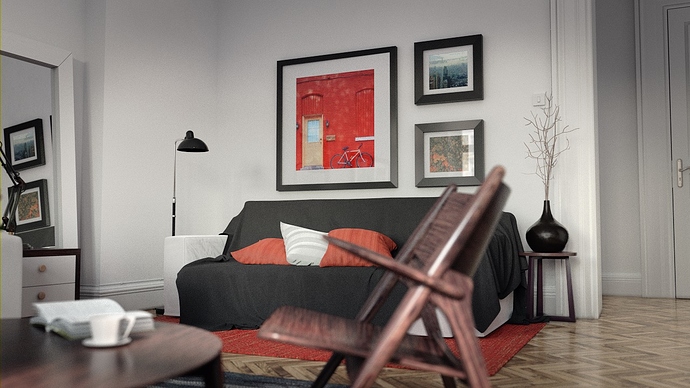 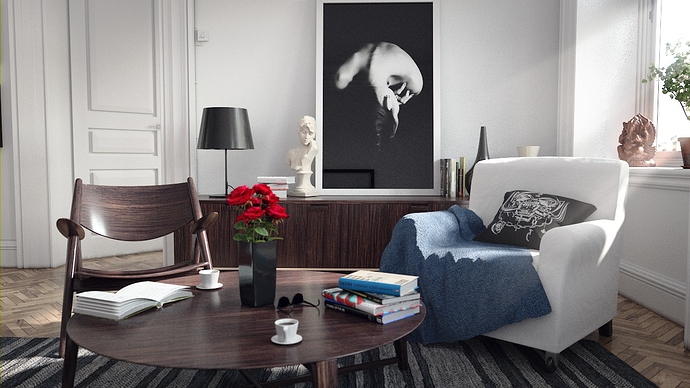 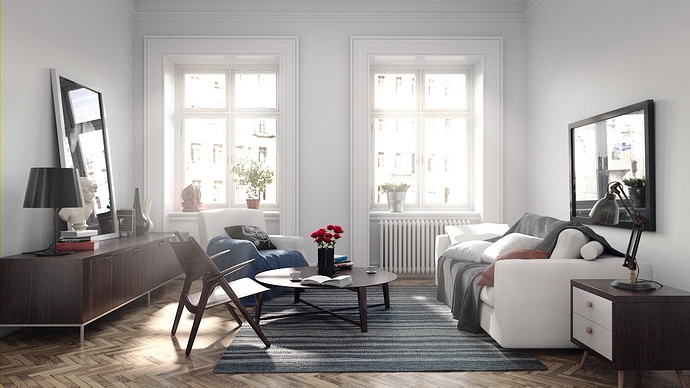 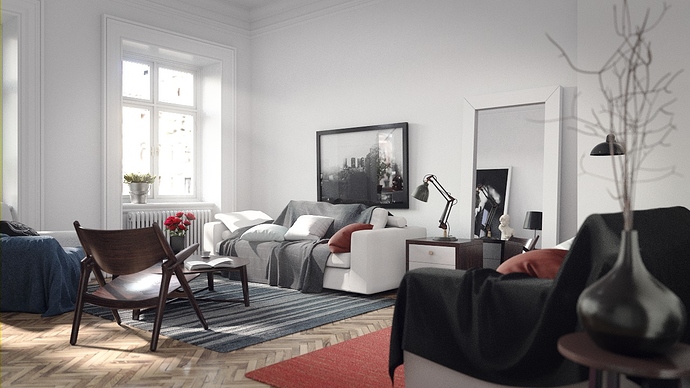 Got 1 question: Was portals’ contribution relevant in your scene with the sun lamp?

@LazyVirus
Portals contribution to the scenes lighting is minimal, though not totally neglect-able. It gave a small extra touch and some colour tint to my lighting.

My first though was to keep all tests in the same thread, but since they’ll be not a straight comparison but more of a “personal experience” approach I thought it would be better to be different posts with links to each other, tough I haven’t decided yet.
When I’ll have a second test and depending on the discussion in this thread I’ll decide for the final form.

Also I’m going to post some screen-shots from set-ups and settings in the next couple of days.

very good, you could share the settings to render and cycles?

One little remark, it seems that shadows on your blue blanket (on the chair) are too… abrupt. I had this issue with cycles a lot. I would advise adding subdivision modifier just for render.

As promised here are some screen-shots of the set-up and the settings. 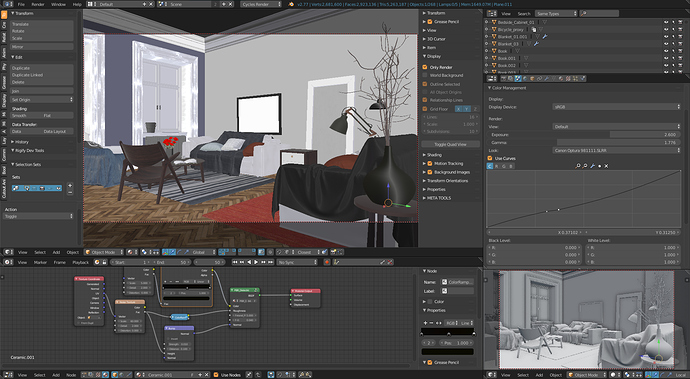 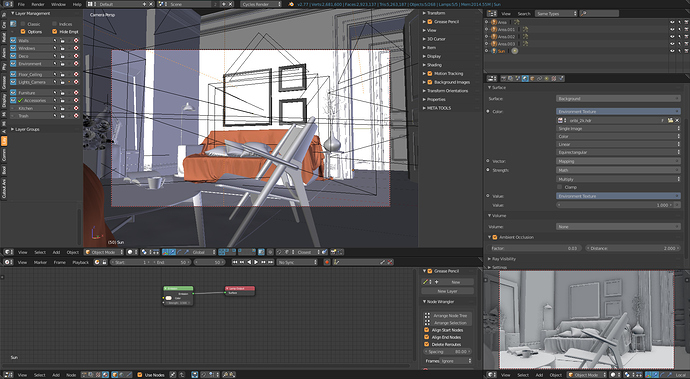 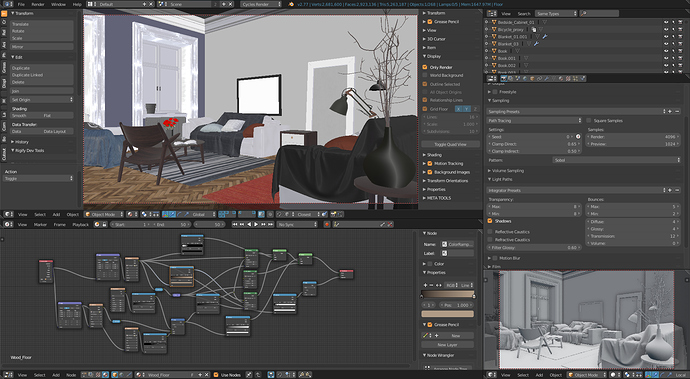 @Margenta Thanks for pointing me at the “blanket - problem” (though I was kind of aware of it) I’ll investigate it further.
Maybe it’s that I’ve forgotten to apply the Multires Modifier I’ve used for sculpting the details.

Oh, you sculpted it? Amazing job!

Just to make it clear…
The fabrics on the two couches are kindly provided by friend and were simulated in MD.

The third one (the one on the armchair) was made in Blender with a mixed technique that I was experimenting with.

In short my technique goes like this:
Cloth Simulation -> Correct any mistakes by editing the model or/and sculpting -> Subdivide one Level -> Repeat the 3 above steps as necessary -> Apply Cloth Modifier -> Add Multires Modfidier -> Sculpt the details.

Generally it works well but definitely it’s not perfect.

Did you try to use AO?

Did you try to use AO?

Sorry I don’t understand the question?
I’ve used AO (Environment Tab Screen-Shot)…
Do you mean something else? 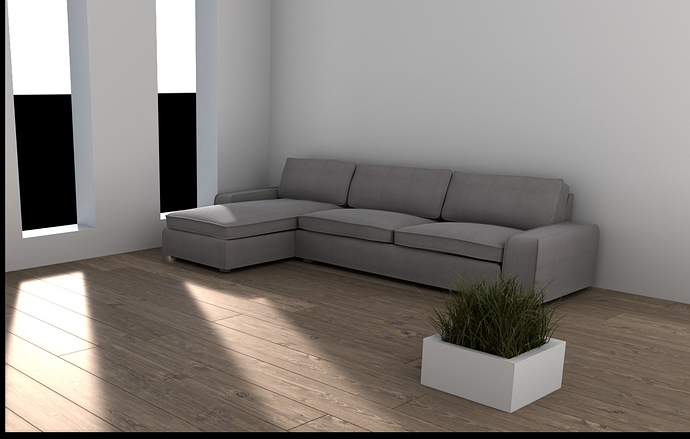 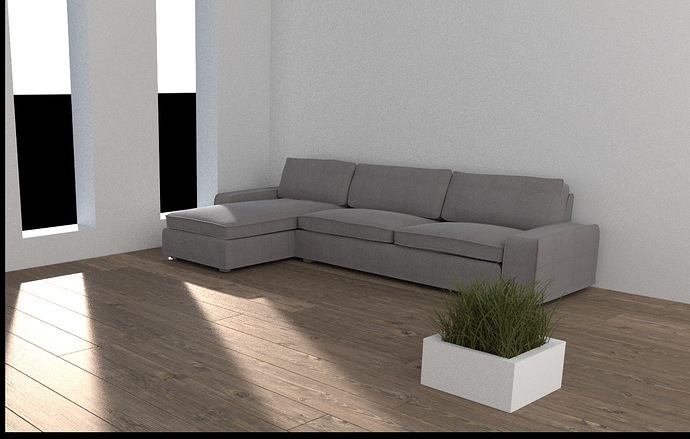 i`ve added some AO pass on top of image to make it more depth.

@zcaalock
Thanx for the tip, I’ll give it a test…:eyebrowlift:

Interesting project. If you need help with the LuxRender part, feel free to send me a PM or open a thread in the LuxRender forum.

Thank you very much!
I’ve already started converting my scene for Lux-render and I’m sure I’m gonna need some help as soon as I get in the rendering phase.

Can you rerender with the filmic blender?

Can you rerender with the filmic blender?