Unlike most people here, I don’t have a view in my head which I want to model but I have a scene in mind and I want to find out what it might look like. Example: What does it look like to approach a very large space ship? The key factor is simulation, not artwork.

So in my case, I have a space ship (roughly one mile long) and I’d like to get an idea of a shuttle landing sequence. Okay, we’ve all seen that before in Star Wars etc. but those are always compressed for the sake of drama.

Blender doesn’t allow me to create objects that are larger than 60 units. So I could say my base unit is a kilometer (so the ship would be 1.5 Blender units). That leaves the problem of the shuttle (ca. 20 meters) which would be 0.02 units. A person would be 0.002 units. I’m wary of all those decimals. I especially dread the moment when I have to give my shuttle a certain speed. Or when I want to add a planet in the back.

So my question is: Is that the right/only way to approach the problem? Or is there a hidden option to set a “base scale” or something? How do you combine very large and very small in a scene?

Blender doesn’t allow me to create objects that are larger than 60 units.

Blender allows you to scale objects up to 10,000 units, though pretty useless since the max camera clip distance is also 10,000 blender units. 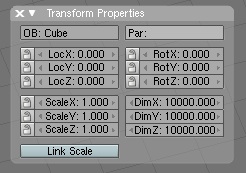 Blender allows you to scale objects up to 10,000 units, though pretty useless since the max camera clip distance is also 10,000 blender units.

Thanks for the quick reply. This sounds very interesting but I’m not sure how to use this since it’s an object property and not a scene property.

What is the effect of changing these Dim values? From the docs, this seems to be the bounding box.

I’ve now tried to scale an object by 500 with blender 2.49 and it does work. But when I rotate the view, I get strange clipping effects. Just take the standard cube and scale it. One of them is that I can’t position the camera outside the cube because the clipping makes it invisible. 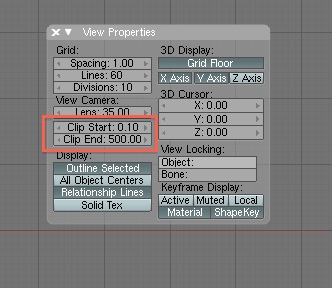 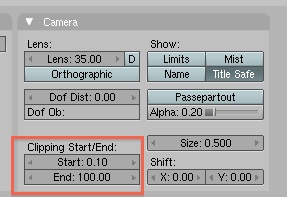 That should be .2 BU which is why I’d like to move that task to blender. I have enough on my plate just to figure out how to model my scene, I would like to avoid having to juggle dimensions in my head.

A 1/10th scale should be manageable if all else fails, though, so thanks for the suggestion.

umm, who cares… this is not a delicate engineering design… scale should be relative, not absolute… and i do agree with spacetug’s suggestion

umm, who cares… this is not a delicate engineering design… scale should be relative, not absolute… and i do agree with spacetug’s suggestion

Well, I do. That’s basically why I ask.

I could do most of the things I imagine in povray but the editors suck; I just can’t find my way around in them. The UI of blender is much better but I have a hard time to create exact designs.