I only first found out about the BWC a few days ago, but I’m still going to try and finish an entry before the deadline. :eyebrowlift: My entry is going to be of a French artist-type guy, building a model of the Eiffel tower with playing cards. Then, just as he is putting the last card in place . . . but I’ll tell you about that when I get to it.

So far I’ve got the guy himself modeled and textured, and am about to begin work on his rig. Any suggestions or comments on what I have so far are welcome! One thing I don’t quite like is his hair - it looks very flat and wire-like. How can I improve it? 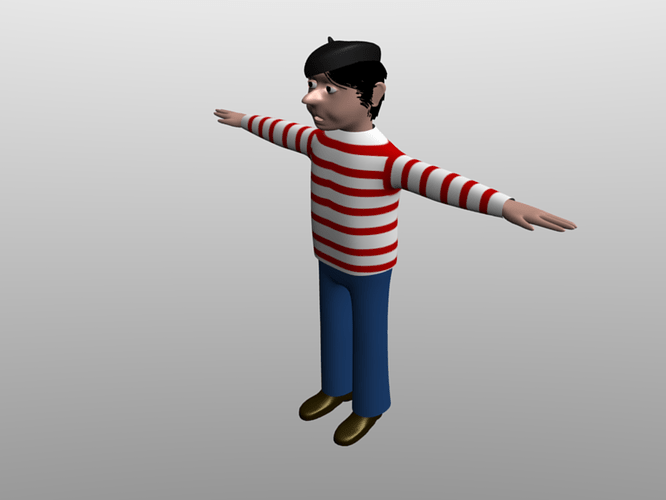 Very french type of person-mesh. I think once you begin the process of animating the mesh, you will make an awesome animation. I can’t suggest improvements - sometimes the details the artist leaves out adds to the flavour and I believe you have done great!

Now I’m rigging him. It’s been a long time since I’ve done much with Blender, so I’m following this tutorial, here. I’m using X-Axis Mirror with the armature, so that I only have to weight-paint one half of him. But the odd thing about it is that, somehow, vertices from the left hand get attached to the right hand-bone. What could be causing this? I tried turning off the X-Axis Mirror for a little bit to fix it manually, but as soon as I turn X-Axis Mirror back on, the problem returns.

Anyone know what I ought to do? I’ve got the .blend file attached, if that helps any. Thanks!

Well, after a couple hours of error, trial, error, and more error, I finally solved that little problem (a combination of wrongfully using X-Axis Mirror where I shouldn’t have, and allowing bone envelopes to deform the mesh in the Armature modifier). And finished the rig!

He still needs a little tweaking, as can be seen in the attached image, but I think he’s pretty much done. The tower of cards will be next . . . 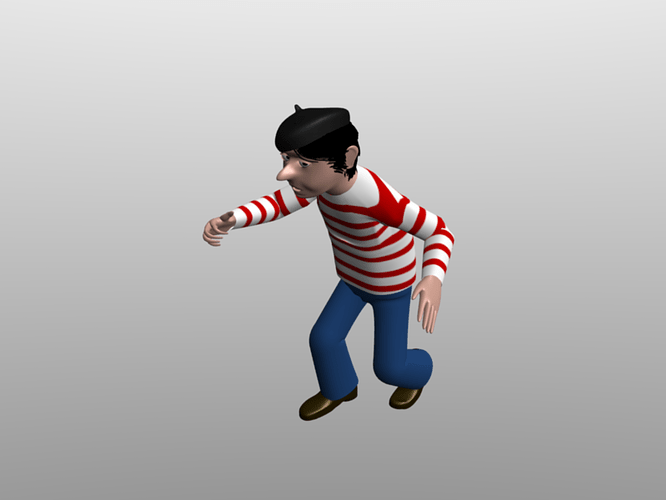 Well, the Eiffel Tower is over halfway completed! I’ve got to hurry, there isn’t much time left in this contest . . . :eek: 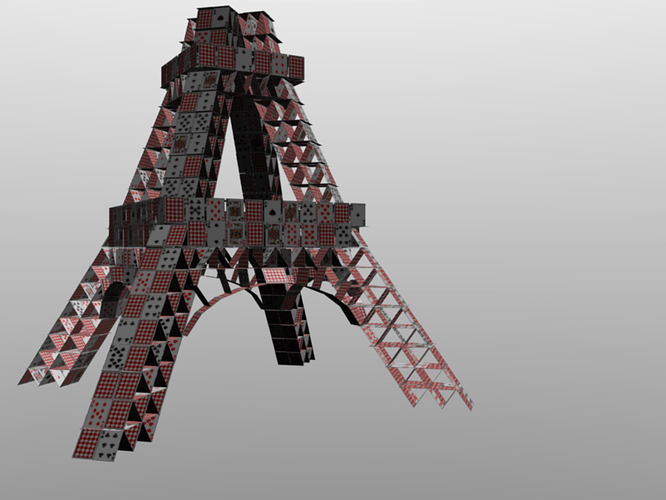 And the tower is finished! A quick render here, with our artist to scale (I’ll be adding a moustache to him, yet). Next I’ve got to work on composition, lighting, adding in different objects here and there to add to the story, etc. - so I’ll be ready for some constructive criticism before too long. :eyebrowlift:

And a quick bit of trivia: the tower is constructed out of 1,907 playing cards, or approximately 36 decks!

Though there aren’t even amounts of each of the different cards; I cheated a little, there. 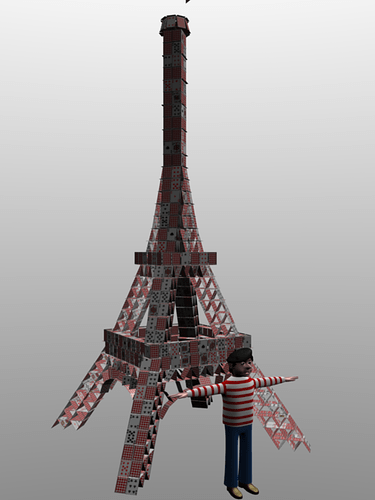 Alright, now I’m working on scene composition. The attached image is a rough idea of the way I’ve been planning on doing it.

The artist is ascending the ladder to put the last card in place, and is looking out of the rightmost window at the real Eiffel Tower, for reference. I kind of want to give this an air of triumph and completion, so I might have a ray of light shining down on him from an arial window off-camera.

At the bottom of the scene, toward the right, I’ll have a table with a couple books on it, a plate of food (most likely cheese, bread, wine, and a banana), and an easel with a diagram of the tower, and mathematical calculations written on it as to how many decks of cards are needed, etc.

In the lower left, I’ll have the scene’s second focal point: the artist’s assistant coming in carrying a box filled with more decks of cards - and slipping on a banana peel; half a second away from knocking the whole tower down. :evilgrin:

What do you think of that? Would such a composition be effective? Do you think the character I’ve got on-scene already is too small for people to be able to tell what’s going on? Having him small does add to the grandeur of the tower, but I’m worrying whether the scene will look alright the way I’m doing this.

And if you’ve any other criticisms of my proposed layout, or any other comments, fire away! I’m going to begin modeling the small props, etc., now . . . 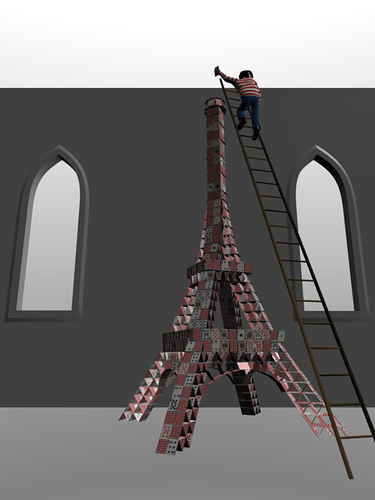 Actually the scene overall is very good, it’s the smaller/much bigger things that you might want to think about, texturing and lighting. As the renders go, I can’t see much of either.

Just turn on the physics and see what happens…; )

I like the idea, keep up the good work. Are you going to put a texture of the eiffel tower in the window?

P.S. The ladder looks like it’s hanging in mid-air, not touching the wall. Maybe it’s just me, but you might wanna check it out.

Thanks for the comments, guys! I had been saving the texturing/lighting for last, since that’s what I’ve got the least experience with. Attached is my current state of progress, with most of the textures in place, and a little more interesting lighting (I’ll be improving it further).

Let me know if you have any other suggestions! I’m probably going to remove the bread and cheese, since I’m having a hard time making them look good enough, and the table at the bottom of the scene (which also needs to be retextured; blends in too much with the floor) is rather cluttered. And there’ll be a few more little things I’ll be adding yet, too, most likely; including a Paris skyline (with the real tower) outside the windows.

By the way, the ladder does not touch the back wall, but instead is suspended by cables from the ceiling - they just weren’t in place yet in my previous renders. And yeah, I doubt a card tower like this is physically possible. 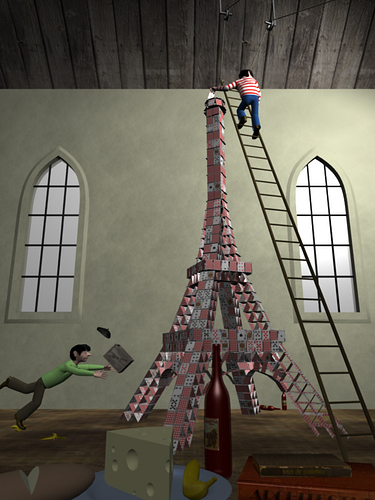 Wow, this is looking great! The texture on the floor isn’t the best, however. And, you might want to think about some kind of baseboard where the wall meets the floor; it makes a huge difference in the finished product.

Good idea, I’ll try adding a baseboard. I’m going to change the ceiling, too, I think. And as for improving the floor - what sort of texture do you suggest?

Meanwhile I’ve been playing around with textures, and have made the plate shiny, and improved the bottle. :yes: 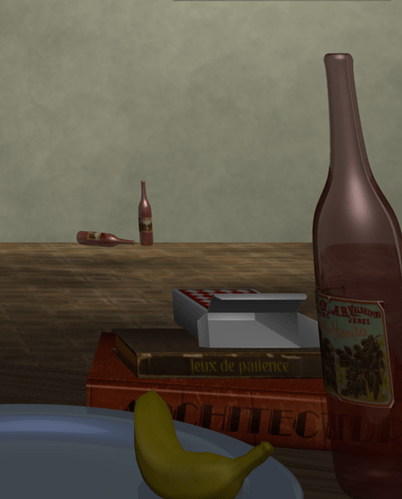 All I can say is BRAVO!!!
I absolutely love the concept! I laughed for like 5 minutes straight when I saw the guy tripping XD.

The only suggestion I have is to maybe add a texture to the character’s face? right now he looks kind of rubbery?

To make the bread and cheese and wine look better…you could always blur them to give the scene a sense of small depth of field. That would be pretty in my opinion :D. I love the overall composition though.

Anyhow…awesome work! Keep it up! Fantastic!

Well, I think it’s time to call this thing finished!

I’ve redone the ceiling, added some empty card boxes on the floor (as well as some boxes and cards flying out of Jacques’ crate), and changed the texture on the table. I decided in the end to keep the floor the way I had it originally, since none of the other textures I tried looked as good; but I did add a baseboard. And gave it some decent lights, too.

Thanks for all your advice and encouragement, and have a look at the finished project thread! 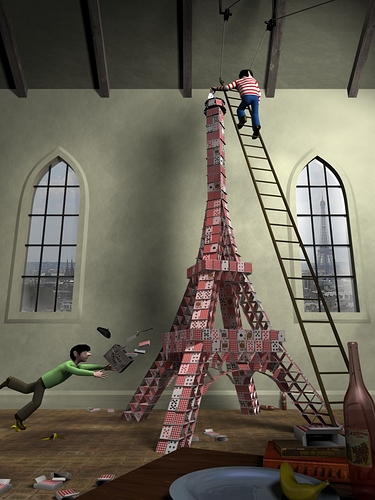 A cute idea, well realized, but the card-artist would be taking a major chance climbing that ladder each time – the setup would sway horribly!