Do you guys also see this advertisement banner at BlenderArtist.org ???

Learn Our History is US history for kids at its very best!  Each exciting animated history video lesson features a group of time-traveling history students who go back in time to see American history in the making. Young viewers come along for the...

I am somewhat disturbed about that. Mods ?

How DARE conservatives act as if they have as much right to promote their views on the web as progressives!!!

Yah the videos - that is a funny story - shouldn’t freedom of speech have limits?

Anyway, I really hope this is just a hick up that I see those ad banners here at BA.

In my experience, people who say otherwise aren’t really interested in speech being free at all, much like software companies that pretend to be open source, the slap down all sorts of rules and conditions once people start using their software.

P.S. how’s that hope and change working out for ya? =P

There is a lot of completely unrelated ads recently.

I used to get ads for Arrowway textures, and now I get ads for “free online game play for free now”.
Honestly I just want to see advertising that makes sense to advertise HERE on THIS website. Arrow way makes a lot of sense being on here, as would advertising for Blender books and DVDs. The chances of th advertiseing being positive for a company selling Large Bento boxes and online “free” games.

I have brought this thread to the attention of the other moderators to look into it. Given that “Politics, political expression and political propaganda are considered inappropriate” from the Forum Rules, it makes sense to me that the ads generally adhere to the same rules where possible.

The site is still being upgraded behind the scenes so this may have just slipped through the net.

Ah ok great - I was hoping it was a glitch.

Hmmm, fwiw my sarcasm was based on the over assumption that cekuhnen was taking a cheap shot at views I actually hold when he was probably just saying what are politics doing here in banner ads?

In hindsight, I was a bit unfair and ‘pre’ reactive, though did make for an entertaining little saturday arvo spat (the IRC channel is really quiet atm)

here is a screenshot - so this is not a glitch but somehow Mikes ad made into the Googles Ads selection for BA.

And it is also inside the forum threads.

So you think Columbus was first who discovered America and the Pilgrims were the first who settled in America from Europe ? Slavery never existed and FDR did not know that the Japanese will attack ? uhm …

Or how do I have to understand this:

Hmmm, fwiw my sarcasm was based on the over assumption that cekuhnen was taking a cheap shot at views I actually hold when he was probably just saying what are politics doing here in banner ads?

BTW in France and Germany you cannot wear Nazi Chick, prais in public the Nazis or Hitler or state that the Holocaust neever happened. I am not sure if that is really a bad thing.

I think freedom ends, when insulting and diffaming begins…

I have very strong political views, but don’t believe it’s right to bore people with them. If people want to know then they will ask. I would also prefer that people keep their own political views to themselves until I ask them although I respect people’s right to believe anything they want provided they do no harm. Even if they are wrong they are a source of endless amusement. :evilgrin:

This kind of advertising is definately out of order on an internationally used strictly non-political forum such as this. Imagine the $#17storm that might ensue if this kind of advertising were regularly spooled out to users from China. Cuba is becoming more progressive, but it still probably wouldn’t be appreciated there either. This international and diverse user base is precisely the reason that religion and politics are taboo subjects on this forum. “Make art not conflict” to paraphrase a famous slogan in the context of blenderartists.

There are probably ad filters that prevent such unacceptable ads from being presented in countries where it could cause trouble, but that they make it through the filters in any geographical area on an apolitical forum is worrying.

I was amazed to see the sales tele marketing ads such as “buy now and we double the knife set for only 19,99 $” generate.
I just cannot think about anything else when I imagine him and his team of schoolars who make sure the videos only show
true and unbiased material. Way to make money with bein a hypocrite.

Funky nothing against targeted advertisement as long as it is productive and not another knife rrr propaganda CD set.

He should have hired democrats to make it for him. Those guys are practically incapable of dishonest spin or historical revisionism… :rolleyes:

With Google Adsense it pulls from the site and determines the best advert to show on the site. It looks like this one slipped through and this one(the advertiser) is spamming a bit across all keywords.

I have just submitted our application so we may review each Google advert that is placed on the site to make sure it is related to CG and we think it will fit well with the community.

Thank you for not using adblock to help support the site and keep it funded. These are a necessary evil and will see if we can kick Google in the shins for it.

Hugs all around and I will update here once our app goes though.

Funny how the left love freedom of speech until someone wants to use it to say something they don’t agree with… Of course, REAL freedom of speech is when we DO let people say stuff even when we DON’T like it.
As I suspect you’ve figured out, he was simply asking why political ads show up at all on BA. With statements like that, you yourself are breaking forum rules concerning politics. Also has been noted many times, BA is a privately owned thread, and has created no laws setting forth the right to freedom of speech on it’s forums.

He should have hired democrats to make it for him. Those guys are practically incapable of dishonest spin or historical revisionism…
Warning. Lay off the politics. You have 667 posts, so you know very well what the rules are.

Here is why political (and other irrelevant) ads show up on BA: Google attempts (somewhat unsuccessfully at times) to target pages with ads based on what it reads on the page. For instance, you may also notice that kitchen blender ads show up sometimes. The only way to prevent these irrelevant ads from showing up is to block classes of ads, and specific urls. As a Google adsense user, I often become frustrated by the ads placed on my sites. Often they are extremely repetetive, or completely irrelevant. It’s difficult and annoying to keep up with on site advertising. I blocked political and other classes of ads for my sites.

All I can say is that when an ad is clicked, the advertiser pays revenue to the site owner and to Google. So, if you hate an ad or the product it is advertising, well draw your own conclusion.

I won’t close this thread, because the ads displayed on this site are a relevant topic. But remember, nobody cares if you voted for the other guy. There are other forums for that sort of thing. 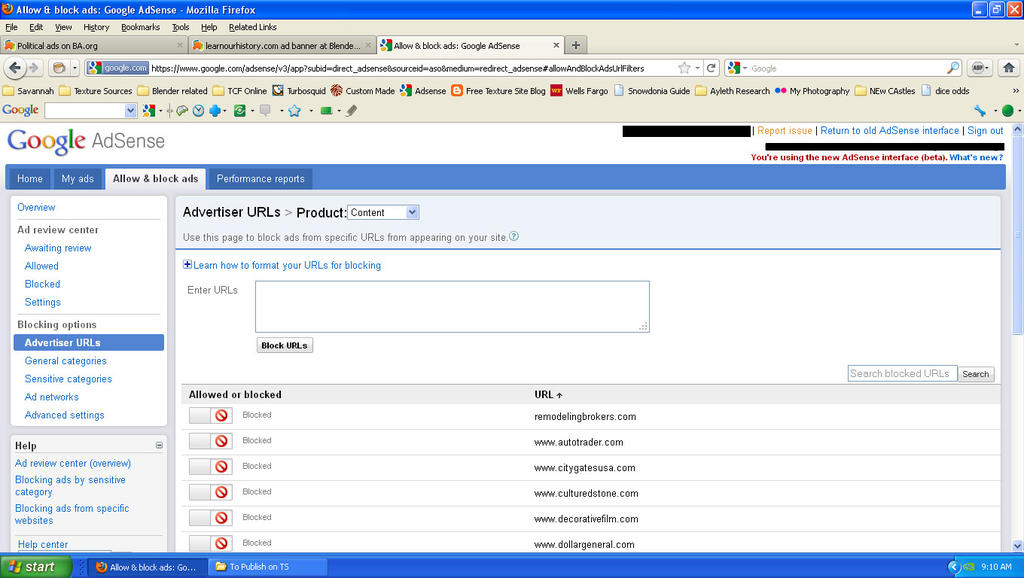 well I like posting about blender stuff here so if not being allowed to participate in the political conversations that occasionally happen is the price of membership then so be it.

Political discussion is not allowed on BA, for very good reasons. It’s not a “price of membership” or anything so dramatic. It’s just the rules.

thanks for looking into this - not deal breaker for me - I was just surprised to see his product advertised here.

I did not assume that the set-up for adsense is so complicated.