Leaves is an autumnal image I finished this evening: 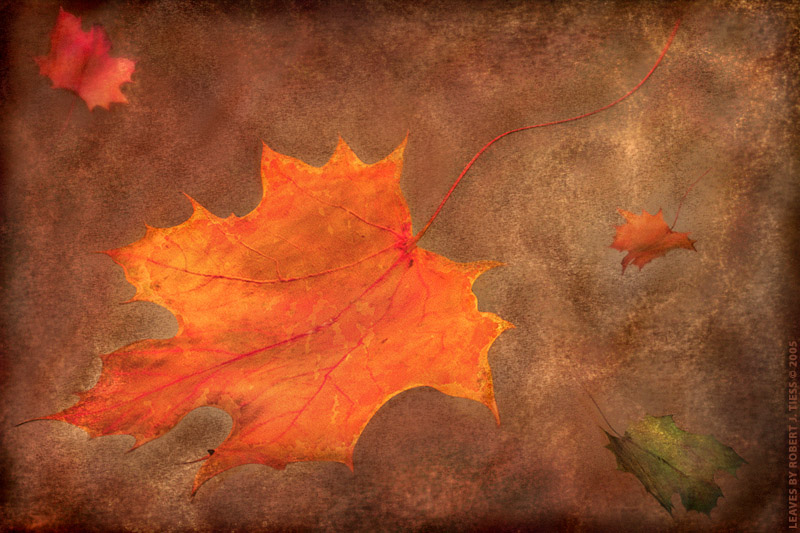 Leaf texture is from a digital photo I took last year of a flattened leaf. Procedural textures were added to the leaves to vary them in terms of nor and color on top of the exiting nor and color maps. The leaves are not alpha mapped; they’re all mesh: 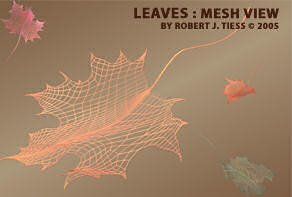 Once leaf was UV mapped, I used proportional editing to make each leaf a little more unique.

Background and post-processing was done in Photoshop. Images are necessarily compressed, so jpeg artifacts are present.

Wow great job on the leaves, the veins really sticks out, though I find that there is a bit too much blur in the background around the largest leaf.

Thanks mischie for the feedback, especially about the main leaf. Jpeg compression was causing big problems there, so I resaved at a lower compression rate and posted a newer image above which hopefully is a little clearer.

Nice work Robertt, Autumn is my favorite time of the year.

As usualy, you have churned out a rendered piece of ‘fine-art’, using a computer.

Did you model the leaf from the photograph?

Spin: Thank you very much for those comments, Spin. It’s important to me to hear feedback in that area, especially at this stage in my Blendering, because I’ve been pressing harder and am trying to create more artistic pieces with projects like these.

Sonix: Good hearing from you my friend

Yes, I loaded the leaf as a background image and then created the leaf face by face, first on the top, and then on the bottom. The resulting geometry was asymmetrical since the leaf had its own geometric irregularities. I used “from window” UV projection, which had horizontally stretched my leaf mesh to fit the aspect ratio of the texture I had loaded in the UV window. Then it was fun trying to line up all the tapering portions of the leaf edges after correcting the horizontal distortion through a few local transformations in the UV pane.

Your welcome Robertt, the updated photo is a large improvement, the image retains the old photo feel to the image, before the blur clashed with the feel and style of the image, my style is a bit weird tonight, I am still in essay writing mode. :-?

Good style. Warm color.
The use of procedural is welcome and give a bit of uniqueness to it. Though it’s a bit too rough-looking. Ho well let say it’s jpeg compression.

The leaves are not alpha mapped; they’re all mesh:

I have weird feeling this was partialy directed to me.

What was the advantage of modeling the leaf?

The greenish leaf at the bottom feels just slightly distracting.

mischie: Thanks for the followup

not at all you. I just thought it was one of those things worth mentioning because it was how I decided to approach this project. Control over the geometry (after the leaf was uv mapped) was mainly my reason in doing it this way. I also toyed with the idea of an armature or lattice deformation, but since this was a still shot I wanted to sculpt the final form into what I had envisioned, something potentially believable with some faint depth.

Dittohead: Thank you very much Dittohead for commenting on my work. I did look at that one leaf for a while, since it departed a bit from the color scheme I had going here. I decided to go with it because I felt it could contribute a little interesting visual counterpoint to the other leaves, a little interruption in the scheme to maybe make the image appear slightly more real and natural and not as if it were a colorized photo (if all the leaves were too harmonious in their hues).

On my way to work this morning there were huge gold leaves streaming down from the trees along one road. It was quite a sight for a few seconds

Very beautiful work. The green leaf doesn’t feel out of place at all to me. I think you blended it all together quite nicely.

I admire your ability to create 3D art that looks like traditional art. Keep improving on your skills and I’m sure you’ll be destined for great things. Of course, that’s good advice for anyone, really.

I like it, but you could still have some control over a plane with alpha mapped texture too. Just have a higher subdivided plane and you can PET edit that to hell as well. Just doesn’t seem efficient to do it this way.

But that is not a copmplaint about the image at all. Just personal preference for modelling this kind of thing.

I like it, but you could still have some control over a plane with alpha mapped texture too. Just have a higher subdivided plane and you can PET edit that to hell as well. Just doesn’t seem efficient to do it this way.

But that is not a copmplaint about the image at all. Just personal preference for modelling this kind of thing.

yea that’s my idea on this subject too. isn’t there a tool to help us with that?
Draw outline of alpha texture in 3DView: CTRL-D (found in the old blacksmith files.

WhiteBoy: I really appreciate what you said. And that is very good advice

This turned into more of a meditative little project, something I really didn’t need to spend as much time on but wanted to get somewhat closer to it. It didn’t take long to do in terms of modeling, probably about twenty minutes, but alphamapping would have nearly eliminated the UV mapping part, which took about fifteen minutes to get just right. It was good practice though. The whole project took about an hour to complete. Maybe modeling made it a little more meaningful in the end. I’m somewhat inclined to model than texture details, but these are all areas I want to improve in. I do have another project in mind for this model in the future, a possible animation about the life of a leaf.

If I had more leaves and was doing a different kind of scene, I probably would have pursued a more efficient route, including alphamapping. Since I approached the central leaf as a super closeup subject, I felt a little more comfortable in creating the geometry for it rather than going the planar way, especially as I considered possible future use of this model for an animation. It’s great that we have all these choices though based on what we need, and even though efficiency or speed was not a major consideration in this particular project, as you and BgDM point out, there often can be easier and quicker ways to realize certain ideas.

If I saw this image somewhere else I wouldn’t know it computer made. Cause it is vey photo realistic. I think this is one of the most realistic renders I ever seen. Great job.

That’s very well done. The composition is excellent as it provides an “Autumn” feeling. Very well done. I always look forward to seeing your wonderful works.

Robin: Wow, thanks so much Robin

While realism is not one of my foremost goals in cg art, little projects like this can be especially motivating and inspire other creative possibilities. No end to what we can create with Blender!

DanBoghean: Thank you for the very kind words. I’m deeply appreciative to hear back from viewers and what they think of my creations.