Hi guys, it’s a me, StrikerMuncher. Here’s my latest submission, ready for the buzzards of C&C (don’t worry you know I love you guys…

The needle is next, don’t worry.

Btw, This took a little over a hour to render, not bad, considering.

Next, I’m gonna try and give the needle the appearance of movement, can someone give me some tips on how the motion blur thing works? I have absolutely no clue how to use it right now. Also gonna add a cord running off the screen, just for realism’s sake.

Thanx for the C&C…
-StrikerMuncher

Umm, how do you read the clock? It would be frustrating reading it when you wake up in the middle of the night, wouldn’t it?

As for motion blurs, set the Bf section lower to produce a tighter blur and higer to make a looser blurring.

The little needle swings back and forth really fast, so the display is actually ‘floating’. Lemme see if I can find a picture… Here’s a good one. 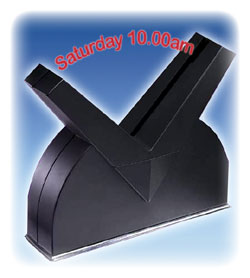 Are you planning an animation of the clock? If so then good luck

Yeah they make those for BEER signs too. I have seen alot of them at the bars of late… They have been around for a long time. Most of the one ones i see say… Drink Miller Lite…

new one coming, this one with a cord. and a better quality render. wow i’m very stupid I set the yafray GI to full on best with 2000000 photons. It’s gonna be a good nother 4 hours i think, but the hard part is done. Cord looks cool in my opinion.

Can someone direct me to a good motion blur tutorial? Gonna try to have a still of the needle moving, Thx!

EDIT: ok, i pulled out my blender book and figured it out. thx. It’s looking cool.

You know with a high enough frame rate and some good swapping materials you could animate a reallllly cool example on how that puppy works! in a video that would look so cool! just my 2 cents

I just thought you might want to know that you are wasting your time with photons. They are only used for having caustics in your image, something which plastic clocks do not typically present. Also, you still have alot of noise in your image. Try increasing raydepth and turning on “cache” button in Gi settings.

thank you, i have no idea how to use yafray! -will post updated image soon.

You can actually make this clock work, in an animation.

But it will be a challenge!

Create an animation (an AVI file), of just the red LEDs. The animation could be 30fps. Use ULEAD or ADOBE Premiere to make it.
This is hard to explain, but the LED animation will look like ‘nothing’ when played back, but if you do it correctly, and time it, it can display a message when applied as a texture on the pendulum, when the pendulum vibrates. Probably a motion blur will make it look better too.

i’ll work on it. i will post a question here when i have one, thx.

plus its a little different than what the snowman had said…

Here’s an animation I did in BLENDER. It is the Strobe Clock.

It actually works, but is kind of slow at 30fps. I did 60 fps and it looks better.

Here it is at 30fps DIVX (680kb).
Click here to watch strobeclockDIVX

How do i see this spin. I am using mozilla and all it says is Download plug in…and when i click that it says no plug in available…

How do i see this spin. I am using mozilla and all it says is Download plug in…and when i click that it says no plug in available…

I don’t know. I am using Mozilla FireFox and have no problem.

Maybe you need to restart Mozilla, upgrade it, or re-install it.

HAHA I used x-vid to open it and I put the speed at 2x it says SPIN!!! that is so cool man. I knew it could be done!