Just wondering if blender is going to have more options for simulating lens flares, since you can only use halo in blender render and paste over a cycles scene or use the ghosts node. and sort of makes it hard to add different non repeditive lens effects to a certain scene (outer space etc.).
Thanks

Lens flares are heavily over used and I would recommend not using them - they are as hot as pink for clothing.

But as long as Cycles does not offer Lens Flare as a shader you can also build them via transparent geometry - not as good but possible.
For stills you can also add them in Photoshop.

no,well,I agree with cekuhnen,but more specifically, they are heavily over used by bad artists who don’t know what they are doing.

People can use it well,watch this cinematic and look how its used at 2:15,it works for the atmosphere of the shot.

its also use in more subtle ways throughout the cinematic, 0:14 for example.

You can build your own,but it would nice as a controlled node with different option for anamorphic lens,etc. ,much like the optical flare plugin by video copilot.

Or by JJ Abrams…

IS the OP JJ Abrams?

In all seriousness, I agree that lense flares are not necessarily needed much less wanted. You can easily add them in with after effects or some other post processing application. 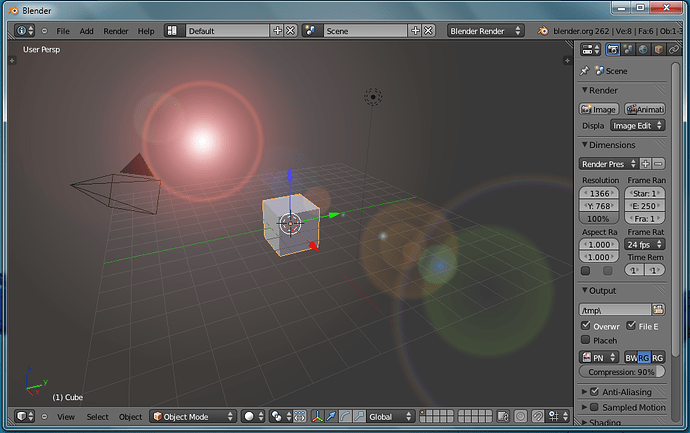 (yeah, stolen from another thread)

I thin it would be nice if Blender had a lens flare tool/node, sure, people may use lens flares too much, but that goes for chromatic aberration, DOF and probably a bunch of other things Blender has in it already.

I think it’s a great idea, I hope I see it in Blender someday!

I dont stop using hammers because other people may over use them.

Tools should be made accessible to those who want to use them in any way they see fit. To block the development of flares because you dont like then is rather short sighted and naive.

Uncle Entity, that cracked me up

To block the development of flares because you dont like then is rather short sighted and naive.

Nobody is “blocking” the development of flares. Some people are merely making fun of them, and humor-value doesn’t really affect development of features one way or the other. Otherwise we would have replaced Suzanne with a much more serious-looking monkey long ago.

Great, now if maybe we could get people to agree that using chromatic aberration is equally tacky, we’d have really achieved something here.

To block the development of flares because you dont like then is rather short sighted and naive.

What development? There’s got to be a million ways to achieve lens flares in the compositor.

The ghosts node in the compositor actually works really well especially in complex scenes. Why? because it creates real effects, not what you normally think of as a lens flare, and therefore much more acceptable. Applied subtly, I have gotten some great results out of it that are not too cliche.

please explain the millions of ways? are they animatable?

thanks for link Craig

and again,you guys are talking about it being used badly.Which could be said for just about everything.You hear “lens flare” and your mind jumps to that default photoshop lens flare posted above.

Lens flares were so over used that they became a no option tool for serious designers. The two here demonstrated examples are of a different kind and very much are more like sun blinding effects than what one would understand as lens flare.

I’m fully aware of the history of the photoshop lens flare.Its a filter,it can be added into an image by,as said earlier,people that don’t know any better.

It doesn’t matter what people “understand as a lens flare” a “serious” designer will know what a good one looks like.

The standard anamorphic flare was also used in first example I posted,effectively.When I say effectively I mean,not distracting.

if you want to see the overuse of flares,watch the movie Battleship,its horrible.

they are effects created by the lens,so they are lens flares/ghosting,.You can even see the rainbow effect in the bottom right of the screen in the second video I posted.

you can same patterns the same things here…

essentially when you say “different kind” you are really just say,“used well” or “not overdone” but there are some cases where it can be blatent,and still work.Infact if I didn’t point them out ,you probably wouldn’t notice them as much.

like the animated ones for the guns in 0:54 of this cinematic,which is used to create drama and panic.

It would just be cool to have some standard Presets,that could then be muted and controlled.

Its definitely not priority,but I think its weird to be so dismissive of the idea,and for sainthaven to say something as bold as “not necessarily needed much less wanted” when they are clear examples of them used effectively,by “serious” artists.

Like I said before, doing it yourself in the compositor will force you (or strongly help you) to not create the cliche kind of lens flares, but have much more control over a subtle effect.

Like I said before, doing it yourself in the compositor will force you (or strongly help you) to not create the cliche kind of lens flares, but have much more control over a subtle effect.

I don’t understand what’s the problem with the idea. People overuse all kind of effects all the time, but i don’t know why it would be better not to have at least possibility to get a quick and easy effect.
Skilled artist would make good use of it and it would save him some time. That’s all there is to it.

I think it is also there are type of lens flare - but I agree that this would be a good effect for the compositor so you can adjust it there later as an overlay, what it also is in reality, because the lens flare does not interact indirect light wise etc. with the scene objects.

This one seems for example to be a pretty good option with making a physical lens flare.

thanks for the the provided links.I’m sure they will be useful.I still like the idea of an actual implementation in to the compositor (or addon I don’t know)

something similar to video copilots plugineven though they are over-used here haha,but he is trying to sell a product after all.

the last link (by brentison) looks interesting,as a non-programmer its wasted on me,who do I contact to find someone who may find it useful?

as i’m looking to make a cinematic this year,I would have to find someone with those expertise,I would help to fund a project like this.Is their some kind blenderartists programmer database or something?

help would be appreciated.