I have recently been working on an OSL lens-flare shader for Cycles that is highly customisable and offers real time preview in the 3D viewport.

This shader has been ported from an original version written for the Renderman shading language by Larry Gritz and Tony Apodaca.

In the transfer to OSL a few new features, such as user definable lens-flare elements based on image textures, have been added. 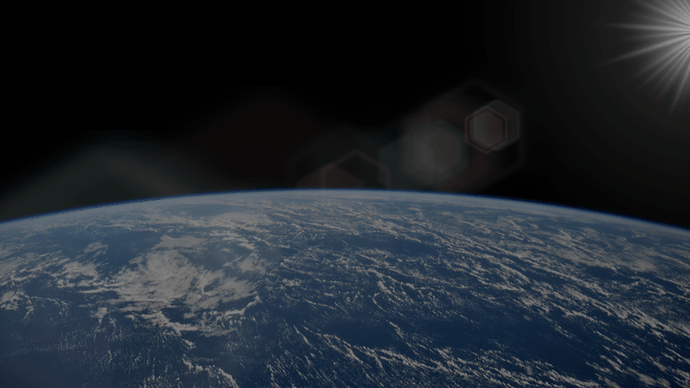 The images above shows a hexagonal lensflare render. The setup is shown below. 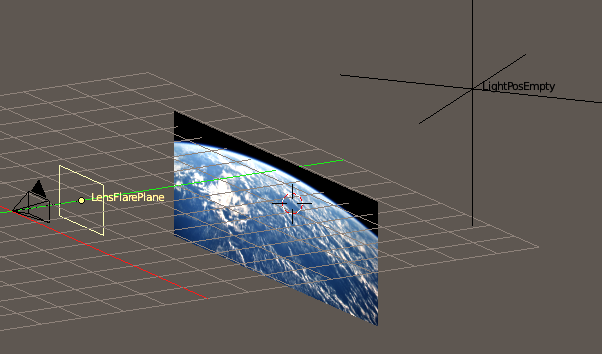 The ‘Empty’ visible at the top right may be moved to change the position of the lens flare - the resulting image can be seen to update in the 3D viewport in real time. 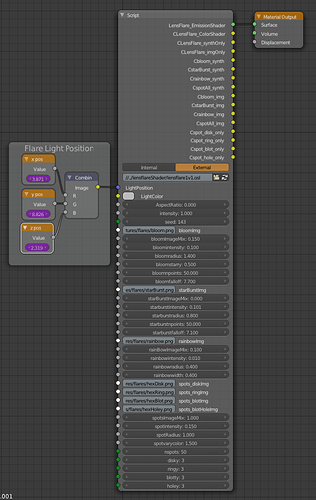 The shader can be directly connected to the material output node of a plane parented to the front of a camera.

An example scene set up is available on BlendSwap here:

An example video is here:

A note not presently in the video
Set the aspect ration of the rendered camera viewport to be approximately the same as for your final image to get the best preview match (this does not affect the final render however).

Features of the lens-flare shader include the following.

I hope you enjoy this shader. I look forward to seeing user images - and hopefully some tutorials from people better at making them than me!

Nice one. Good to see some non texture scripts.

Nice, i will be testing this out on some projects later today

Just had a quick play, seems like there isnt any motion blur? is there motionblur avaliable to materials? or is it just object motionblur?

I gather that the plane carrying the flare material isn’t moving relative to the camera so wouldn’t accrue any blur. I was going to suggest gathering motion vectors from a sphere surrounding the camera but on another layer but motion blur on a flare would be quite different as it occurs within the lens. The only part that should streak is the source lamp I think.

Also, a real flare appears in frame before the source, because it enters a round lens and causes refraction and stuff. Then the source lands on the rectangular image field. Would it make sense to make the material plane circular? Could you attenuate the effect close to that circular edge? So that it doesn’t just blink into being.

Nice one. Good to see some non texture scripts.

I agree, great shader. Thanks for it.

I belive that it does take that into account, i just loaded up the example and moved the empty driver offscreen, and loaded up rendered view and it still has the circular effects going on without the bloom visible.

Also, a real flare appears in frame before the source, because it enters a round lens and causes refraction and stuff. Then the source lands on the rectangular image field. Would it make sense to make the material plane circular? Could you attenuate the effect close to that circular edge? So that it doesn’t just blink into being.

Funny thing I was just through some old photos and noticed a long exposure of the sun (vari nd almost opaque). It was a long exposure hand held, so it had a streak of light in the sun ghost image, half way down the flare sequence. So yeah flares do have motion blur but it’s track must be quite short for 180 deg shutter of most recordings.

Hi everyone – thanks for the comments and feedback.

I’m just off to work - so will respond to the motion blur idea tonight. I have not tried motion blur - but it sounds like an excellent idea - and there are probably several ways to achieve this.

I’ve just re-loaded the .zip file to BlenderSwap if anyone was having trouble with the down load – the .osl file was missing (although the shader script could still be loaded via the “Internal” setting in the script node).

have not been able to confirm the BlendSwap upload however – as the site has just stopped responding for me!

I belive that it does take that into account, i just loaded up the example and moved the empty driver offscreen, and loaded up rendered view and it still has the circular effects going on without the bloom visible.

I agree, great shader. Thanks for it.

Thanks to you too for all the work with OSL for Blender and publicising its use. I found you tutorials very helpful.

Just had a quick play, seems like there isnt any motion blur? is there motionblur avaliable to materials? or is it just object motionblur?

Hi I had a quick look this evening at a few motion blur options. There is an OSL global vector called dPdtime that according to the OSL specification should give information about how the pixel being shaded is moving - but when I wrote a quick script - it did not seem to be giving any values for moving objects (I may have made errors though).

If the shader could get the past position of the camera and "LightObject’ then it could shade the blur in itself. I imagine this could be achieved with pynodes/python script that is called post frame render - so that the positions could be saved for the next frame.

I also tried a few tricks with motion blur enabled in Cycles (such as moving the lens flare plane in various ways - to see if this would ‘fool’ the shader into drawing the blur frames) - but to no avail.

Did you have any luck with a ‘get around’?

The idea of generating vectors from a previous frame could be useful in other areas too.

Quick off topic sorry:
When shooting chromakey video elements for compositing you need to minimize blur at the edges for a clean key. Best way is to decrease the shutter exposure time, but this gives a very strobe like appearance to movement. It would be nice to track the moving object and place a mask that moves around it. Then derive the vectors of that movement for blur in compositor (or OSL?)

Another scenario for Blender is it’s lack of slow motion generation for fixed frame rate assets. That is external footage used that needs to be slowed down (frames added) but cannot be re-rendered at alternate frame rate. You can interpolate by mixing between additional frames or a bit better you could blur the moving parts between frames via derived motion vectors. But getting them from the tracker I guess is the hard part :S

Hi David, Thanks for the comments.

You have a great set of VSE tutorials!
Can you recommend a good Render Output can Encoding Setting for uploads from Blender VSE to You Tube? I just use ‘plain’ old QuickTime to capture the screen (15FPS) - and then Blender VSE to edit.

I notice you’re in Bris - if you’d be keen to catch up sometime then please PM me.

I was wondering about this tool, what would be the best way to get multiple source flares onto the material screen? Would I use multiple screens/planes?

There are a couple of ways to add multiple flares. You can have as many as you want (if you really want to go all JJ Abrams!)
As doublebishop says:

This can give you a lot of control in post compositing - when you really want to tweak features to subtly suit the scene (that’s one reason why there are so many colour outputs – to allow each element that makes up the flare to be colour/value tweaked/distorted for the desired effect.

I plan to make shader tweaks and usage the subject of video tutorial 4/4.
Video 3/4 is on automated lens-flare masking and is rendering now 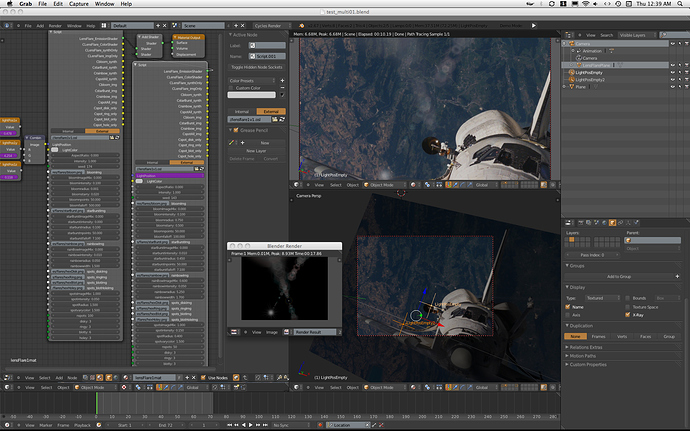 I have just uploaded a tutorial on how to set up the compositor to automatically mask the lens flare when its ‘light source’ passes behind a solid object (like the Earth for example).

Here is an example scene showing the effect:

Here is the tutorial:
It’s pretty long – but there are ‘quick jump’ links in the “About” section.
This tutorial has enough information to set up a scene from scratch (hence the length – the compositing bit is only around 15 mins!)

There’s an entry on the BlendBits blog site that describes the general workings of the compositor set up which I’ll reproduce part of here. (The OSL shader is also available from this site - or from the BlendSwap link in the introductory post).

The actual node set up is reasonably simple - as can be seen from the noodle below.
The general idea works as follows:

a) Flare Blocked: When the emission source is behind a ‘solid’ 3D objects (white) mask – then its bright white image passes through the Multiply node. (i.e. 1 x 1 = 1 = small white dot)

b) Flare Not Blocked: If he emission source is not behind a white mask – then it does not appear at the out put of the Multiply node. (i.e. 1 x 0 = 0 = totally black image)

(In earlier version of this noodle - various blur functions were used to spread the dot ‘gating signal’ to cover the whole image. 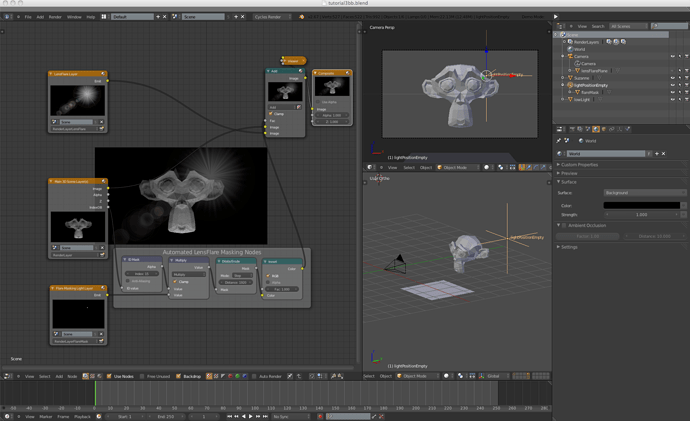