model in blender 2.63
render with cycles and sun ray with BI

Try to create a lonely library hallway in a sunny day

Hi ForgottenWorld,
Looks pretty nice. I like the mood. I do have critiques though, if your interested. (I know this is the Completed Projects forum, so I’d thought I’d ask)

Chromatic aberration seems a bit excessive, but other than that, the scene looks great!

What?! imperfection? but… thats impossible!!
Just joking, critiques is fine with me:yes:

Definitely an awesome scene. I like it a lot. The only issue I can see is that it looks like the back legs of the chair are floating, or is it just me? Kind of threw me off. Other than that it’s great!

Shelf texture seems to have been “projected from view”; it’s all distorted on the undersides of the shelves. Other than that, it’s a brilliant scene, and I like it a lot!!

Thanks for the feedback! but there is one more question that I need to ask: how to make this scene more realistic looking? I was going to use this image for the blenderguru challenge but then I saw other entry and I realize… THATS NOT GOING TO WORK!

That’s an enormously difficult question to answer…but I shall try.
I don’t like any of the glass in here, I’m sorry to say. I’d either get rid of those glass objects or crop the image. However, I really love the globe. It’s really the best part! Maybe just make the entire image consist of just the globe

Also you could add more variety to the book texture?

Your books appear to be looping… 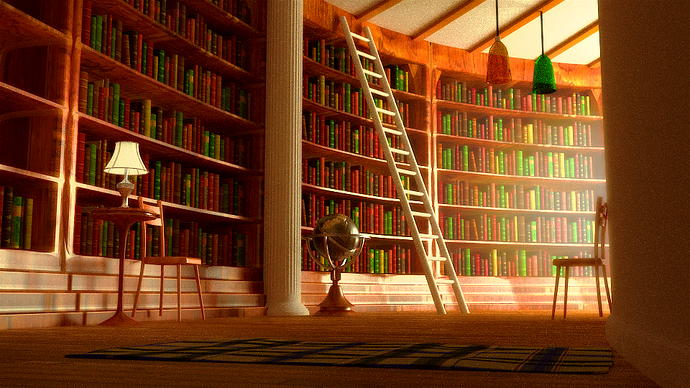 With the camera that close to the ground you could get a nice gradient of DOF. Want to try it? It just makes everything look better, but don’t overdo it, or it’ll look miniature.

Along with adding more variation to the books, you could try putting groups of the same books together like they are in a series. Are the books organized using a particle system? If they are you might have to apply the particle system and then group the books by hand which is tedious but gives a better result.

Thanks for the comments! I will be making more change soon, it going to be a pain for sure when grouping those books…