My 3D View is different than the Render Image … View …
The object group was linked in from another file.
Array modifiers are used in one circumstance … with an
<<Object Offset>>
The 3d View correctly uses the array modifier. Item placement for the array modifier is consistent with original library.
The Render Image presents an incorrect view of the array modifier… The array items are spatially different. It appears the object offset has incorrectly moved.
This situation needs to be corrected.
I am rather surprised that the render and 3d view look different for this spatial placement.
Thanks for any ideas on how to correct this situation.

I am rather surprised that the render and 3d view look different for this spatial placement.

I’m also rather surprised that you didn’t bother to include anything in your post to actually show the issue, such as a screenshot, blend file etc.

My most recent surprise. I found a solution.
I know from reading in the not audited past that a Blender Group Library Link (BGLL) has a sense of closure.
It may pull items into the link that it deems connected to any explicitly specified item.
It for example might include a object offset <object> even if the blender user does not include explicitly in the BGLL.
That may be the case here.
In the array modifier panel is the object offset <objectnameconcrete> value.
Previously this <objectnameconcrete> was not in the relevant group
I included the <objectnameconcrete> in the Group and this corrected the immediate problem.

I failed to include .blend files or images. I may include an image in a few minutes. In simplified model explanation, the library object was a bracelet is circular formation 360 degrees, single radius, with start and finish connected. The 3D View was as expected. The render image presented the bracelet in spiral formation, multiple radius values, with start and finish disconnected. Which looks likes the <objectnameconcrete> was not positioned correctly.

My original surprise remains.
Sometimes I do not include .blend files when I think the
cost of indirection and nonisolation
exceeds the cost of textual explanation.
Sometimes I want to think about the problem without blender in front of me.
Everyone has their style.
I am happy to surprise anyone in a good way.

Are you using a Subdivision Surface modifier on your object? It sounds like the result you might expect if the subdivision levels are different for the Preview (3D View) and Render values

Blender 2.5
Immediate problem is solved as stated before.
Simplified model is included to show behavior.
Perhaps others can cast vote if the behavior is reasonable or not.
Desired model are the letters <d e f> in triangular ring formation with 3 repeats in array.
Little sphere is included as part of group.
An image is included.
The library file and test of library is included.

A <group> was linked from the library.
The important point to notice is that an <object offset> can be in or out of the library file group.
To test with files … one may

The yellow mesh CV is the array object offset, it is set NOT to render.

F12 rendering … with the … no group context …
produces clear and not subtle spatial placement differences,
when compared to the opengl 3d view.

viewport in image legend is the opengl viewport 3d View rendering of camera view … so image cropping is not required. It shows the library link controlling empty as axis.

Model is simplified. When I tested multiple times a second spurious CV appeared.
That is the item which was moved in and out of group appeared twice in 3D view. 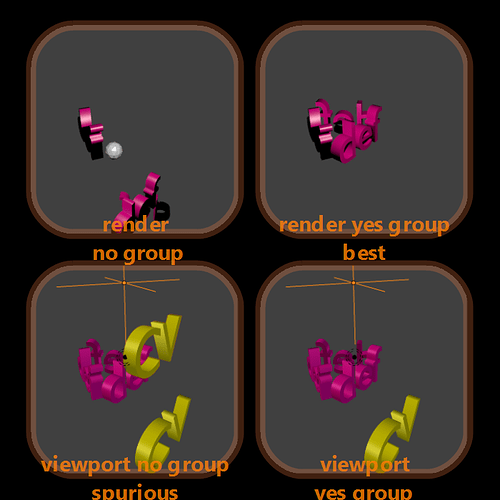