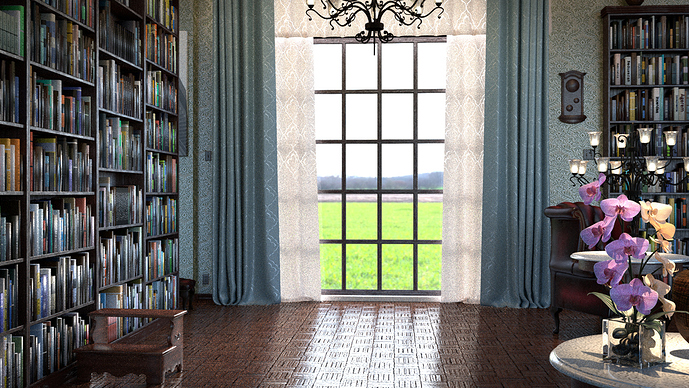 Getting started on a new scene in a library (it’s supposed to look like a home library, the kind you might find in a big house). I’m hoping to use it as a background in another project, which is why the center is so empty.
The interesting part of this scene is the books – I had to write a python script to generate them randomly because I’m too lazy to do that many by hand

[ATTACH=CONFIG]292763[/ATTACH]
Attributions:
Some models and textures from blenderguru.com’s Architecture Academy
Some textures from cgtextures.com

Just getting started on this one so many thanks for any comments/ideas!

Hey does anyone know if there is an addon that can generate the random books? I’d rather use that if there is one, but so far Google hasn’t turned anything up…

i nominate your script

pretty decent results from your script! my only crit from a composition standpoint is to tone their color down just a tad so they won’t compete with the focal point you’ll add later. i’d also add some crown molding to the tops of the bookcases to go with the traditional look of the other furniture in the scene. but - great start! i’ll be interested to see the finished piece.

Well I had time today to add a few more items. This project still has a ways to go though. Any ideas much appreciated! I added the crown molding that you mentioned wolfred, thanks

Hmm, can’t seem to attach/upload any images. Have to try back later. 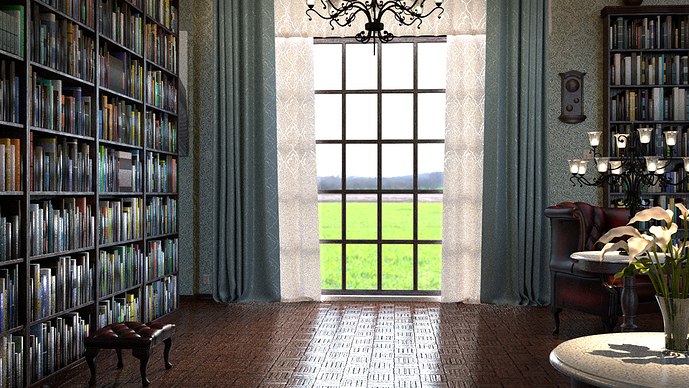 Looking good! The books are awesomely generated- but the bookshelf itself is a little repetitive for my taste… I would randomize where the middle sections of the bookshelf appear… Right now my favorite part is the footstool

Oh! That is a good idea, I did not think about making the middle shelves different heights…thanks! I like that stool too…but that is made by blenderguru.com… _

Time for an update! Brought in the orchid, that’s the flower I wanted in the background for the symbolic value. Also took the suggestion from bossestrenders to change up some of the shelves…I think the footstool is new too.
I think it’s almost ready to do a nice long render to get rid of the noise!

Very nice! But I think that it could benefit from a deck outside… or maybe a concrete slab?? Beautiful work on the Orchid, BTW XD

I think you are right bossestrenders, a slight image of a deck outside will make the room feel more open (like there is a door, not just a window) 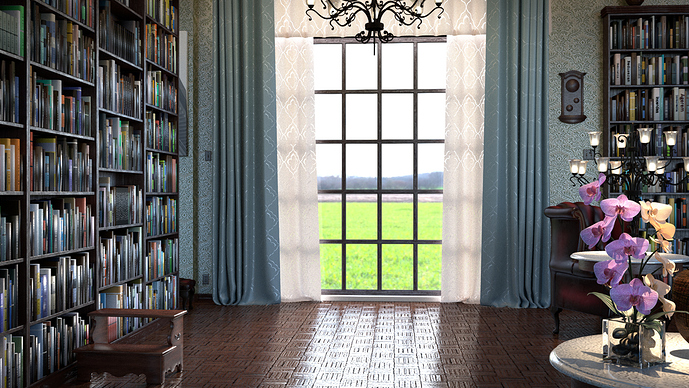