Life Is Not a Game (Blender+Yafray);Updated with HDRI render

This is one of my latest works, Life Is Not a Game: 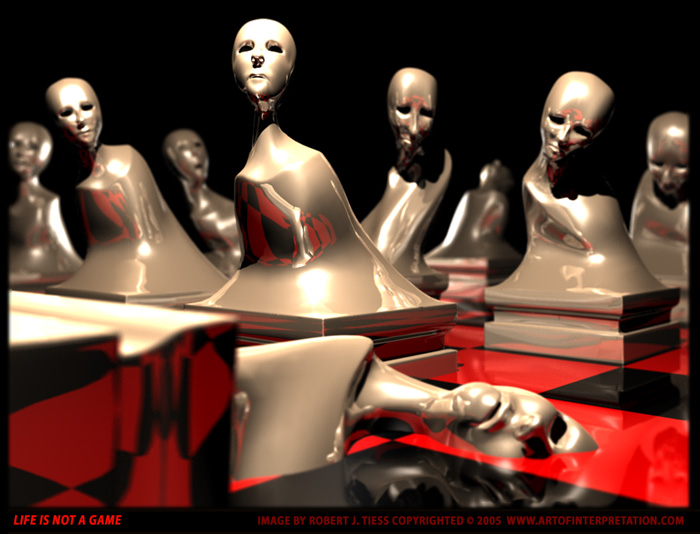 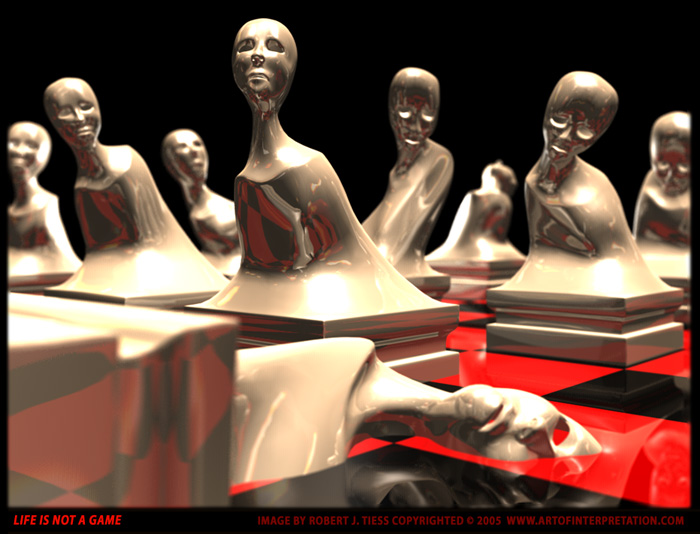 This was created in Blender and rendered in Yafray.

This is really great and very expressive. Is the DOF produced with Yafray or in postprocess ?

The DOF was produced entirely by Yafray. No post processing was necessary, thankfully.

Camera focal length is set to the centermost figure at a length of 7.0 (and a clipping length of 24. I had to raise samples/passes (25x25) and set aperture low (.040) to get better results (and wait an extra hour or so), but I thought the end result was worth the extra time (while I went outside to dig my car out of the snow)

I could have used the internal renderer and Zblur to achieve comparable results, but I intended this to be a “Yafray project” in order to get some more experience with that renderer.

looks good Robert. I would really like to see this same scene rendered with an HDRI light probe.

great implementation as well (as always)

i really like this robertt,
great color and mood,
looking forward to more animations too, any chance of seeing the karate guy at sunset in action

Use HDRI to illuminate the scene, you will get a tremedeous result !

An alternate HDRI render has been added to the top post. I used Photoshop CS2’s “merge to HDR” function on two varied images of the original render in the top post, where I created one dark/low level and one bright high level version of the iamge, which was then used by Photoshop to create the HDRI file. I realize this is may be unorthodox, but I did not want to use a third party probe. This is the first time I’ve done something like this with HDRI, so that was interesting

I should say I have mixed feelings about HDRI, and the only way I intend to do it is by creating my own “light probes,” since lighting for me is a very complex, personal, and expressive thing that I try to uniquely create for an image. I would rather not have an image out there and have someone say, “oh, nice, you must have used the [insert your favorite light probe here] for HDRI.”

Some HDRI reflections can be very interesting but distracting depending on the probe used, or the scene. It’s something I will further consider and probably work on in my Yafray experiments though.

I still prefer the color and contrast of the first render, but I do see some advantages in the second render. In the first one I had a specific idea for the lighting, whereas in the HDRI version I felt there was less direct control over the subtleties.

Now for some individual replies

lucidMonkey: Thank you. Check my first post for the HDRI render.

Wu: Thanks! I actually recorded some dialogue for a possible animation for that character a couple of weeks ago. I have a simple scene in mind and just might do it if I don’t get caught up in other creative projects first

I added an alternate HDRI render to the top post. I actually wound up decreasing the reflectivity of all the elements in the scene. I also revised my light setup with a sun lamp and back light so the HDR file could do its thing. Fun stuff indeed. It’s a technique I will definitely experiment with more.

I like good abstract pieces like this and with a fitting title as well. It reminds me of that painting with the melting clocks. Nice use of Yafray and reflections.

Two words came to my mind when I saw this:
Creepy and Morbid
It’s very “artistic”. The only thing that bothers me is being able to see the red checker through the guy’s eye in the HDR image.
Everything aside, I like it a lot.

Realy nice Robertt. This is what I call “Robertt style” So keep this kind of work up. I realy like the character in the back who’s stretching backwards. That gives the picture a whole new feeling!

would love to see that animation man! your facial character animation is some of the strongest ive seen on these forums.

… though it has to be said making an animation isn’t something you do in a jiff.

Robertt - as a project to learn Yafray more I think it’s good. No slap-in-the-face though. I do think you can get similar results with the internal render. Perhaps cause the reflections and the lack of surroundings.

sago (aka vibroman)- just trying to explain that their is more potential then just a still render with 3d, and with great characters like robertts kungfu dude, and your frankenstein their is tons of great humor and animation potential, thats all…

Great concept, looks good, and is HIGHLY disturbing as per your usual abstracts.

Interesting. Still trying to figure out what to make of this one, which is a good thing.

sago (aka vibroman)- just trying to explain that their is more potential then just a still render with 3d, and with great characters like robertts kungfu dude, and your frankenstein their is tons of great humor and animation potential, thats all…

I’m sure Robertt will keep on working on his animation skills. I know I’m giving it a try. It just takes lotsa time, no matter how much potential there is.

Sago (or Vibroman, or Sacha, it’s all good…)

This image evoked a lot of emotion… just not sure which ones.

I think that first render is way overlighted (i don’t know if that word exist but i think that you’ll understad) and the sencond one is better.

GOOD JOB ! - waiting for another