Hi,
While shopping on google for free HDRI light probes, I had an idea. Why not just make my own scene, and my own probes.
That way I have full control over the lighting and reflection.
So, after 2 days on and off, ~6 hours, I came up with this small studio room:

Here is a 3d No Plugin file so you can pan around the fully rendered room:
http://www.savefile.com/files/1460437
Just unzip it somewhere, and double click on the HTML file. All you need is Javascript enabled for it to work.
Then simply click on the picture, and drag left and right to rotate the scene.

So, this morning, I dropped in a mirrored ball and made a probe with an ortho camera, please excuse the grainy jpeg below, my file host compresses the images

Here is the OpenEXR file if you want to use it in your own materials and light setup’s:
http://www.savefile.com/files/1460655
The Open EXR image is 1024x1024, with lots and lots of detail.

And here is the Blender file, in case you want to tweak the lighting, or materials. you guys are welcome to use the textures too if you want:
http://www.savefile.com/files/1460675

Think I want to add studio lights, electric outlets & switches,paintings, and either blinds or curtains.

Then the next light probe will be a bit more realistic I hope.

Looks good but I still prefer the real thing

The big problem with this sort of probe though is that it’s difficult to get the light levels right. Just by looking at the JPG I have a feeling that your sun isn’t bright enough. One of the big advantages of light probes made with correct hardware is that they get the contrast of light levels between different parts of the scene (eg in/outdoor) just right

Did you turn this into a true .hdr file, I don’t think images will work for hdri lighting if they aren’t hdr files. I’m not an expert on this though so I may be wrong. HDRI Shop is a good tool for working with these kinds of images.

Its a neat idea though, good hdri images are hard to come by, and I think I have downloaded every free one on the web haha.

Cool idea! I think I’m going to create one or two of these for my own stuff or work stuff as well. I need to get more and better studio/light setups anyway.

There is a way to make a 360 degree lat-long format image, but the drawbacks are that there is no anti-aliasing and you can’t render to an HDR format:

I was thinking about the same idea but didn’t know about HDR Shop.
Looking forward to see the result!

You don’t need to use HDRShop to produce a HDRI file. In theory, a 3D application could do it if it can save to OpenEXR and Blender does. This said, this environment is not HDRI even though it is saved in a HDR file format. What makes a HDR file a HDRI is the fact that it contains parts of the image that are brighter than white. This not the case in this image. In this image, the skylights would be good candidates for that but they are not much brighter than white. For instance, if the lights were truely much brighter than white, their reflection in the floor would be much brihter then they are right now.

One small tip, if you ant to make your own probes is to set your lights attenuation to “Inverse Square” you can do that only in v2.46 though. But once you do that, your light setting should much better reflect how they behave in reality and you should get better HDRI files.

ypoissant, thanks for explanation but is there more detailed information about creating and using OpenEXR files in Blender? I can’t find such - just about how usefull HDR images are

LOTR Junkie, interesting method of creating HDR images, but the output is really pixelated - even with such high resoultuion UV map!

ypoissant, thanks for explanation but is there more detailed information about creating and using OpenEXR files in Blender? I can’t find such - just about how usefull HDR images are

Not sure I understand the question. In Blender, Buttons WIndow -> “Scene” -> “Format”, you can select OpenEXR for output format. That is really all you need to do.

If your question is about how to create scenes that will output HDR data in the OpenEXR file, then that’s a whole topic and there is no simple “push this button” recipee. You need to setup your scenes in a very realistic way. Using the usual CG tricks won’t work well at all. That means the lights must have realistic properties, the object surfaces must have realistic properties, etc. It is easier to produce HDR files while using rendering technologies like radiosity because this forces you to build your scene in a more realistic way. It is just as complex as setting up a scene for rendering in Yafray, or Indigo or any of those engines. The technical knowledge required is the same.

As for using HDRI files, The detailed answer I cannot give you because I’m just learning how to use Blender and I’m currently learning how to do UV mapping. But the general answer is that you would use a HDRI file as an environment map to get nice HDR reflections. That would be the first step. Then, you could use the HDRI file to illuminate your scene with IBL. I have no idea how to any of that in Blender though.

In Blender, Buttons WIndow -> “Scene” -> “Format”, you can select OpenEXR for output format.

I find the same option for saving images in UV/Image Editor too.[/quote]
The question was general for everybody. Is there a more detailed explanation about using OpenEXR or even a tutorial?
Because the concept is pretty complex and also creating a reallistic light rig is not the easiest thing, it will be nice to have such documentation.

Sorry I have not replied to this thread in a while, I have been installing Ubuntu Hardy hardon 8.04 64 bit the past couple of days.

Thanks for all the information on HDRI and OpenEXR.
I wonder if I could just make a probe with the lights, and forget about the reflection for right now.
I am going to start on another room soon.I want a more antique look, with rounded top windows, and fancy doors. Some stained glass would be neat too.

all that after I learn how to compile Blender SVN for 64 bit GNU Linux. So far everything has gone really well with this install, hope the compile is just as easy .

Another way to accomplish this and capture the dynamics of the outside light is to create the scene in Blender and then export and render in your favorite free unbiased render engine (Indigo, Kerkythea, or Lux Render). All three work great in Linux.

Then you have to shoot something in close up (but preserving lighting information)…and also want to speed up things. Do I have to render the whole scene over and over again

you have of course gone to the guru Paul Debevec’s site http://www.debevec.org/
on this page under the title Online Resources/ HDRShop is a very good tutorial on creating and using light probes.

Since the illumination is really just a matter of different exposures to the same scene by varying the shutter speed, I wonder what the results would be if you map your desired image to a sphere with computer graphics then vary brightness/contrast of this map in Gimp (or such) then mix all images together in HDRShop program.
Anyone know? or is this off the mark?

Check out this thread for some more information. It will answer some questions.

Hi Angela, thank you very much to share such a good work

You showed a very good idea and a gorgeous adaptability in going beyond the problem!

Since the illumination is really just a matter of different exposures to the same scene by varying the shutter speed, I wonder what the results would be if you map your desired image to a sphere with computer graphics then vary brightness/contrast of this map in Gimp (or such) then mix all images together in HDRShop program.

This said, there is another important step in the creation of HDRI file from photograph that can be applied even to low dynamic range file with interesting success. It is the linearization of the light range data. By just linearizing the image data, you can already get much more interesting reflections. You do that by reverse gamma correcting the photos.

If you have a digital camera that can save to RAW file format, then you already have what you need to create HDRI environments. The RAW file format is already much higher color resolution and can be under-exposed by 1 or 2 f-stop to obtain a very usable HDRI environment maps. That is the cheapest way to get HDRI files out of a camera IMO. All you need is a way to get the RAW file into a Blender-readable file format and keep the data in 16-bits and in linear lights. I use BreezeBrowser for that but there is a command line executable freeware around that can do the same thing. Then you are set.

I bought one of those gazing balls in a garden store and make my own HDR images. Works very well.

I bought one of those gazing balls in a garden store and make my own HDR images. Works very well.

Ha Ha! Me too. I started messing around with AHDRIA to capture the entire sequence of photos with my Canon camera. HDRShop did a great job of making the HDR file. Unfortunately, I don’t have anything worth posting…yet.

Here’s a picture I made with a a LDR environment map I made of the laboratory where I work using the garden ball. 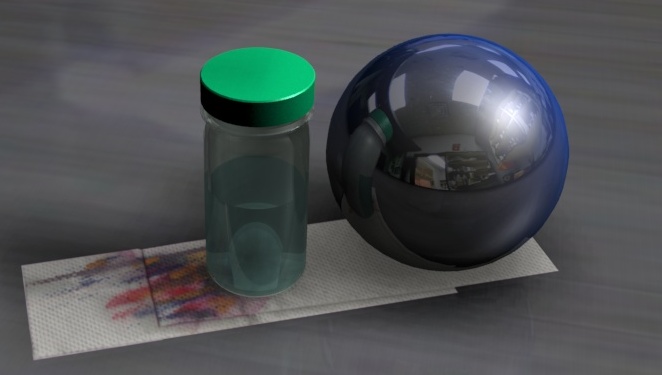 Ha Ha! Me too. I started messing around with AHDRIA to capture the entire sequence of photos with my Canon camera. HDRShop did a great job of making the HDR file. Unfortunately, I don’t have anything worth posting.

Here’s a picture I made with a a LDR environment map I made of the laboratory where I work using the garden ball.

Cool! (even cooler that you work at a lab!)

Yeah I just use photoshop’s merge HDRI. I have found that the ball is really nice because it does not have to be a perfect shot as long as it’s in the frame. PS will center all the picture. However, I have been looking for other HDRI programs to see if they are any better.