So, I am doing the Lighting Challenge I found on the internet
and I am trying to light this scene: 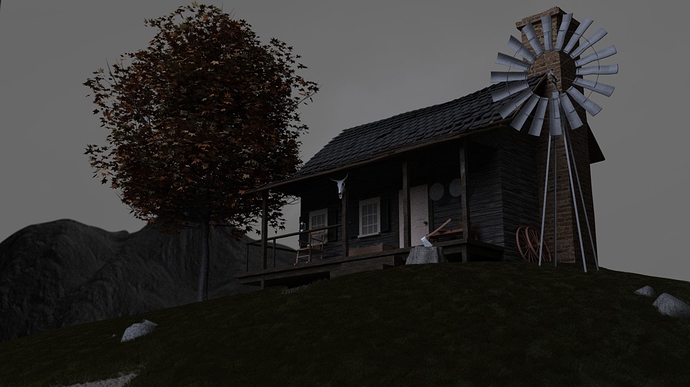 Is there anything you think I should change, add?
Please, keep in mind that I am mostly working on the lighting and texturing/shading.
Thank you,

In the current state the lighting takes away from the scene all together. Right now it looks like you are using just ambient light for the entire scene. Instead I would change this to either use an HDRI or just a sun lamp and remove the ambient lighting.

Thanks!
But I am aiming for a moody/dark scene to resemble cabin horror movies. Also, I am not using ambient lighting. 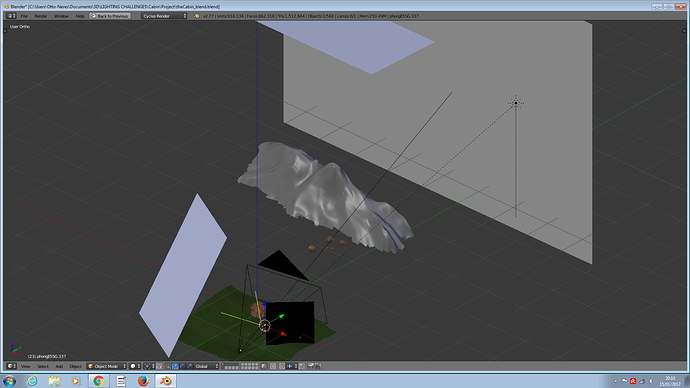 It looks extremely flat at the moment. Try giving it some rim light to make the cabin pop.

If you don’t want to change the lighting because of mood you could try using contrast in the compositor , that will sharpen the lighter parts a little whilst maintaining the darker theme of the render , you could multiply an ambient occlusion pass over with a low layer weight as well to give a sense of depth and detail to the scene geometry. I personally would put looming clouds in the background and have atmospheric\volumetric mist in the scene which can all be generated by blender pre compositing (Cloud Generator Add-On and Z mist pass internal , or a simple cube encompassing the entire scene with volumetric shading in cycles) , it can be a hefty learning curve to get cloud materials playing nicely with lighting though. Compositionally speaking I would bring the axe in the stump to the foreground , that would be pretty foreboding and give a point of focus , also at the moment the tree , cabin , wind turbine axe and rock formation in the background all appear along a perfectly straight diagonal line cutting across the scene which would be very rare in reality.

Any suggestions on how to add depth to the lighting? You guys are being pretty helpful.

Here’s how the scene is so far (updated): 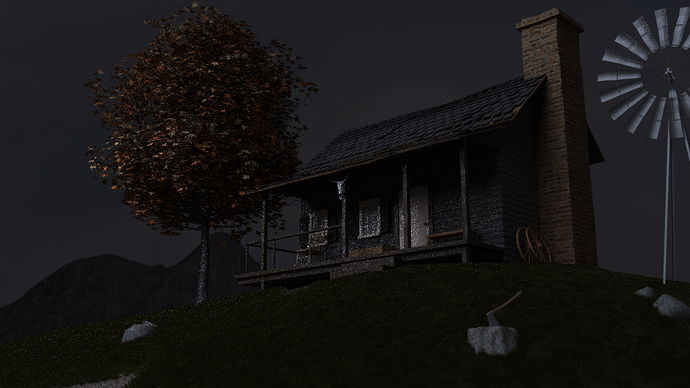 Rim light, aka Back Light. Google 3 point lighting system - that’s the standard for anything not theater.

Hi, adding a sky environment map can liven the whole scene and also able to cast some sky light to your scene

I like it already, a huge improvement could be done at the background. Maybe add some
kind of dark forest and maybe add a strong orange colored point light at the door. Rain or wet surfaces in general are also nice when working with dark environments as they reflect light.

I did a quick paintover, hope you don’t mind

Mostly added atmospherical stuff like the cloudy sky and some fog on the floor, and a bit of color correction. 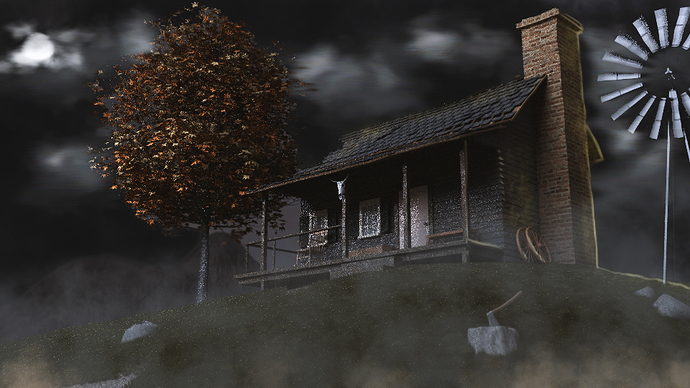 Thanks everyone! And wow, thank you so much, julperado. That really clicked inside my mind, I am definitely going for your idea!

As a follow up to julperado’s contributions, You can further edit your contrast and coloring using the color management panel.

Here i used the “Film” effect, along with high gamma and exposure, along with modified RGB curves

This may not be the style you are looking for, i went with a pretty extreme unrealistic contrast here , but its worth experimenting with the color management panel yourself to see what works. And as an added benefit, the changes you make show their effects realtime, both with viewport renders and final renders. 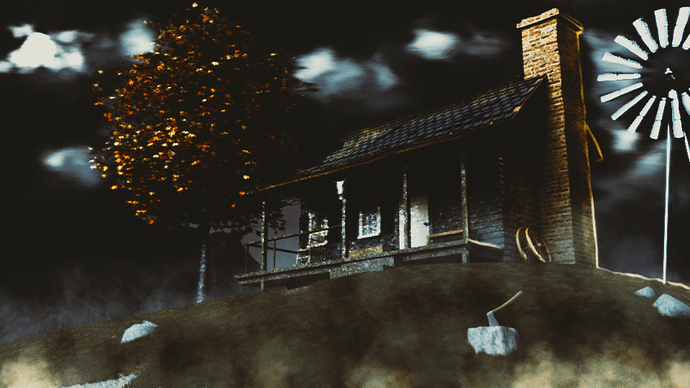 Update. What you guys think? I decided to keep a slightly more naturalistic lighting (representing the hard light from the moon) instead of the yellowish rim julperado suggested. I haven’t decided yet though. 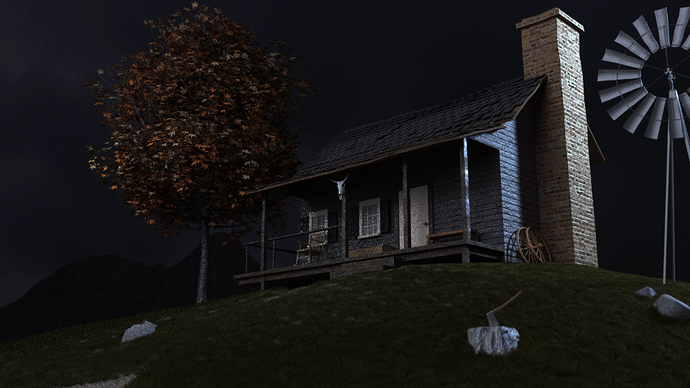 Nice work with the lighting. Simple yet effective.

I’d say, decide what the focus point is, make it a bit lighter and then darken the rest down. With some more lights and less environment lighting, you can get a much more
dramatic lighting!

I still prefer the composition/camera angle of the first image, even though the lighting can be better, its overall scene looks more realistic than the latest one. The rocks steal the focal point away from the main elements, probably you might want to make the rocks darker.

The lighting is starting to look real nice now , my favourite animation movies always make me feel like I’m looking in to a little world inside a computer , your render , especially around the wheels and chimney are starting to give me that vibe…

The grass & brick shaders are starting to look awesome as well , I would say the windmill , compositionally speaking is maybe a little awkward and the shadow cast by the moon through the wheels are maybe a very , very little bit hard or dark for moon light, you could maybe rotate the axe prop so the handle is facing you as if you would need to pick it up as a ‘tool’ of self defence as you approach the looming hut… Just some alternate thoughts.

Thanks everyone! I decided to go with this lighting (maybe I will tweak a little bit).
However, snow or dry grass? 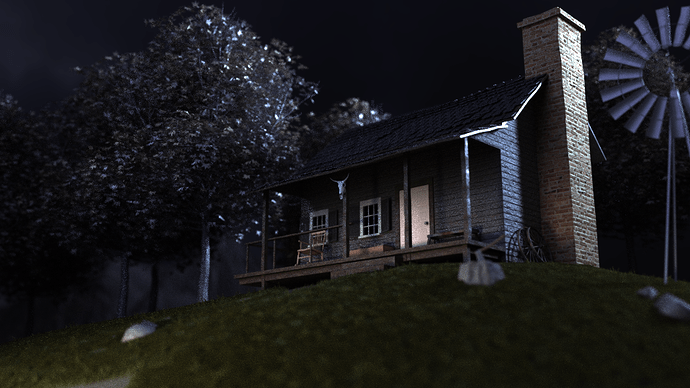 Hey, nice progress from the first image of this thread