hi everyone.
i am making a dragon with very complex wings. i want to have it so that as the viewpoint changes, the colors on the wing changes too kind of like when you look at bubble soap or some crystals. sorry i couldn’t offer a better explanation…

not sure if I understand your trouble, but I think taht you can use color ramp to take this effect,

i’ll give it a try

I think you’re talking about thin-film dispersion, I know BI doesn’t have it, Lux does and not sure about Yafa. This it what you would use on say for instance, dragonfly wings and such where the rainbow of colors appear when viewed at certain angles, or like oil on the surface of a pond. Ramping would be good if there is a way to map to incidence angle through BI, but I haven’t tried looking for it, so I’m not sure it can be done that way.

I just found that mapping to the specular channel does a fair approximation of this effect, and it is relying on the light position. Set the blend type to mix or multiply generally has the same effect. The effect is more pronounced on curved surfaces rather than flat.

This example has a bit of z-transparency just for the heck of it. Not sure if it’s what you are looking for though. 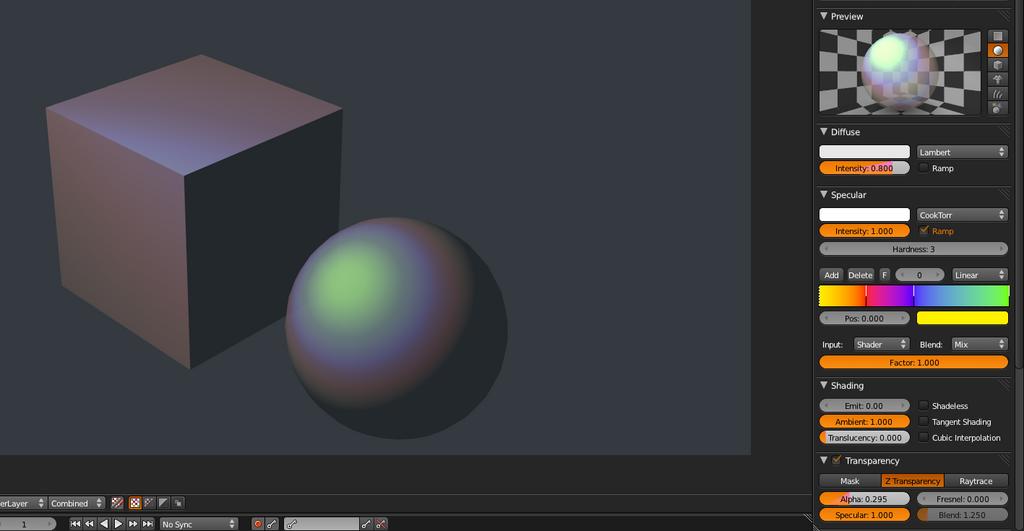 Ramp shaders may be a way to do what you want if you want a quick way, but since BI doesn’t have an option to do something like a thin film, you might want to look into material nodes and mix various colors and one or two other materials with the help of the geometry node.

Since the geometry node makes use of options that are based on normals relative to the camera, it will allow you to have shading and coloring that changes when the angle to the camera changes, learning how to do this with nodes would be a bit more complex than simple ramp shaders, but it will give you a bit more flexibility and power in how you want to do it.