Lighting problems in a theater model

My first Blender project is a home theater model and I’m having a few lighting problems that I could really use some help with. Light from the ceiling and sconces that reach the floor should generate some degree of ambient light that would light up the walls a bit. Simillar for the light from the sconces that reaches the ceiling. Also light from the screen should light up the room some as well. The screen image is just a texture with emit=1. (similar for the sconces, but they’re UV). I would really love to get the sconces to transmit some of the light inside them to the walls instead of hard shadows, but everything I’ve read says that is problematic and I’m finding frequent references to “faking it out”, but haven’t found a convincing way to do so yet. I’ve been having really lousy luck with area lights, which seemed like they might help, but so far haven’t. (I’m starting to regret using a scale of 1 inch to 1 Blender Unit. Most of my lights are pegged at Energy=10 and I’m running Dist way up to get what I am. Was this really a dumb thing to do?) 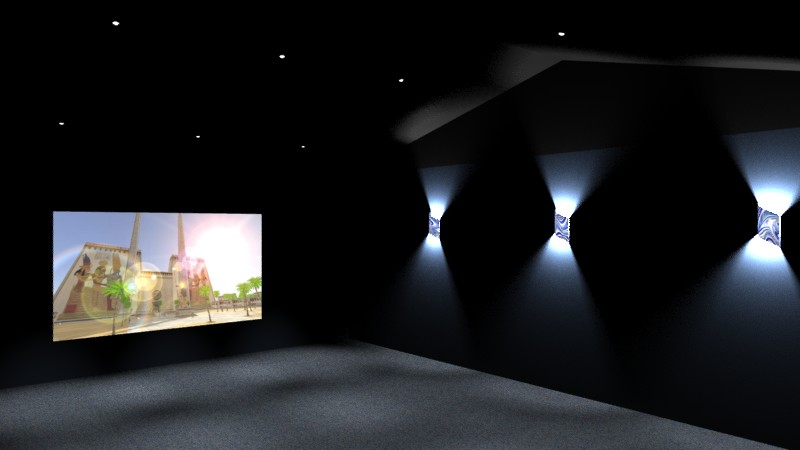 you could try baking the radiosity and then rendering blender internal and see what you get. There is a section in the blender manual online that explains how to do the radiosity.

Thanks for the replies. I forgot to mention first time out that I’m using YafRay, which has very different results with radiosity. Following suggestions from another forum post I’ve tried jacking up the emit power in the YafRay GI subpanel with some very strange results in a simple test model.:o https://blenderartists.org/forum/viewtopic.php?t=55203 Note that there are no textures on any of the materials! Unlike the referenced post, I don’t have a sun providing ambient light. It’s all just the little patch near the ceiling. I’ll keep experimenting and see what comes out. Thanks again and more suggestions on improving the realism of the theater sceen are always welcomed.