Lightsabers in Brothers of the Force

For about ten months, I worked on a ~5 minute video project using Blender. I was only able to work on it during times of the year when I was not in school or away on research. It has a Blender CGI sequence near the beginning, all lightsabers were done using a vector blur process I developed when nodes first came out in Blender 2.42, and a few other special effects also done in Blender. Credits, etc, too. I edited it entirely in Blender, although a little of the sound editing was done in Audacity, and GIMP was useful occasionally, too. I used Voodoo Camera Tracker for one shot, too. I love following new developments in Blender, and you can see several of the new features used, like sky and shrinkwrap. Can you see where shrinkwrap was used?

It was a family project; the only other people involved in the production were my brother (some sound and acting), my mother (camera when we both were in the shot), and my father (narration for intro).

I’ve used Blender quite a bit in the last three and a half years. I found it right when I started college, with Blender 2.40. I loved it, and since then I’ve used it in almost every class (I’m a physics major/math+geology minor), and produced many illustrations. I loved special effects, and always wanted to put together an actual short with my own effects.
My video is up on youtube, just search for Brothers of the Force, I’ll try to post a link here, too.

Be sure to watch in Hi Quality, I made it to be heard in stereo! 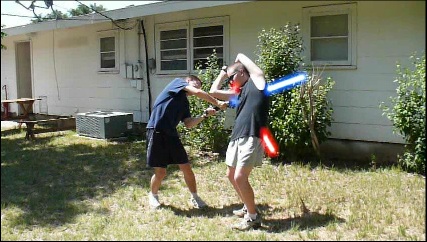 It was cool. Good job

Now for the crits:
-The effects needed to be on additive blending mode(especially the one where he hits the dirt).
-The light sabers glow wouldn’t be so visible in broad daylight.
-The lightsabers would have a glowing effect on the people wielding them. They are a light source after all :).
-The sabers stand out as too saturated. They don’t fit in with the video. Usually effects need to be “dirtied up” to fit in with video.
-Maybe some more dramatic lighting or increased contrast in the overall film?

Those are the only crits I can think of. Great job on the video though! I enjoyed it.

Hey, thank you for the crits! I’ve got a sequel planned, but my free time lately had been about negative 4 hours.

A few notes on the crits:

Sometime I’ll put together a new system, and try to get it just right before filming. I’ll be testing your suggestions on that one. Thank you!

I’m glad you liked it.

PS: I hope you liked the ship landing shot, I’m proud of my node setup for that

Edit: Oh, thank you, Sycosys, too. And, magiciandude, I like your sig.