I did some work. My coworker did some work. Now I want them together.
He did the room, I did some equipment and people in the room.
I wanted to still be able to move them, so I decided to link collections.
Everything I link into this scene ends up being at 5.6x1.9x1.7m
But if I append the same collection, it’s in the correct spot.

If I linked the room and the objects I made into a brand new scene, everything is where it’s supposed to be. So yeah, I have a solution in sight, but I’d like to know why this happened, and how to avoid it in the future.
Any ideas?

One more thing I noted was on one object, I used an array modifier on an object and radially arrayed it. Within the instance, one of the objects ended up being moved in in X and Y to the location that everything was importing. Screenshot attached. The part directly above the Z arrow there, there are two of them. Both should be moved in XY to the rest of the stand. Then those little pieces floating about are the ones with the array modifier. Since the pieces they are looking to go moved, the object array got all messed up. I wasn’t sure if that was more telling evidence of the issue or not. 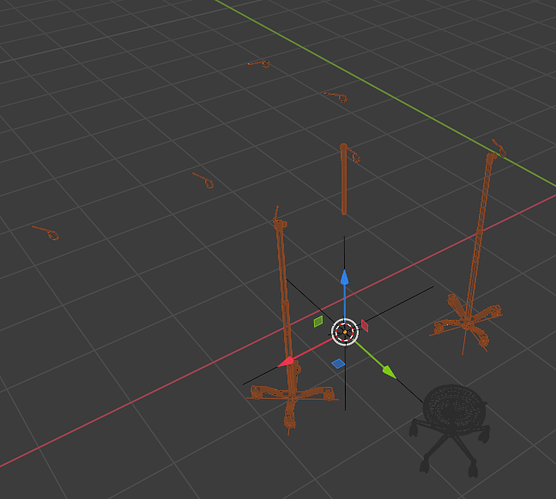 Linking places collections at the 3d cursor. Reset you 3d cursor to 0 0 0 and you should be fine.

Yes, yes it does. Wow. Thanks.
It was still good that I started a new scene anyway, because that one was a bit of a mess.