The only thing wrong with my fluid simulation is that the liquid is not respecting the obstacle’s surface boundaries. I tried using shell / volume / and both for the champagne glass. The glass has no subdivision modifier. I’ve been trying all sorts of tweaks but clearly I’m missing some simple setting. Do you know what it is? Thanks.

Well I fixed that issue, but now I want my champagne to cling and flow to the outside of the glass as it overflows, instead of splashing off. I’ve tried countless combination of slip/no slip/mixed. Changed viscosity, scale. But still not getting that cascading champagne that I want. Any ideas?

Please share how you solved this. I am sure it will be helpful to others.

Try making some force fields around the lip of the glass so the liquid gets pushed down the sides, instead of splashing out, might not look to great though, it’s not a method I’ve tried before.
Hope this helps

Well I fixed that issue

and your fix was…

Unfortunately I don’t know. I remembered that earlier saves hadn’t had the problem and so I opened an older blend file and copied my new settings. I think what happened was this: I baked the simulation without subdivision surface modifiers on the champagne glass. After baking I decided to sub surf the glass, and then I applied it, thinking that the modifier must be applied for future bakes to respect the new geometry. When I baked again, I think the fluid was calculating on the original vertices. Not really sure.

My latest bakes are getting close but still not there yet. Biggest things I learned are that you need a pretty high resolution (>120) to get anything worthwhile for this effect. Low res bakes treat the water like big chunks and you won’t get thin flow. The size of the fluid emitter is very important and very sensitive, especially when it get small (close to a drop of water, according to real world size) the electrostatic forces take over and it wants to just stay a drop and not flow much. I also had to increase the viscosity (by decreasing the negative exponent), which in turn slows the whole animation down. Also the real world size has a big effect on what you’ll wind up with. I’m kind of putting it on the back burner, but eventually I’ll do some more bakes and see if I can get it where I want it. Anywho here’s a current bake 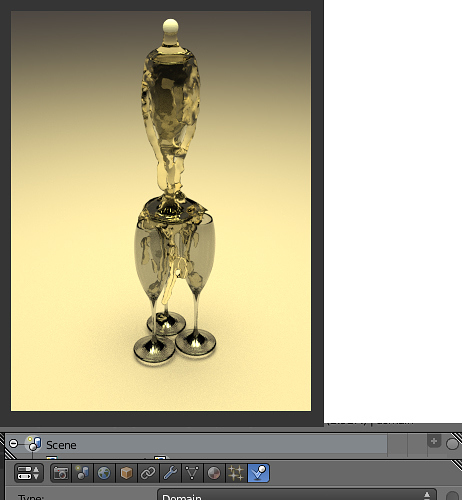 I’ve got halfway decent results for the champagne cascade.

I will try the force field, thank you.