I’m very happy to announce my finished project that I’ve been working on for the past year-and-a-half. I started working on preproduction towards the end of my sophomore year in high school and got to the rigging and animating in the fall of 2016, which lasted for about a year. Rendering started immediately after 2.79 and the Denoiser were released and took about 50 days at 5-minutes per frame on two i7 processors–one rendering at 12 logical threads and the other at 8. I premiered it with family and friends on November 6th and uploaded it to YouTube and Amazon Video shortly thereafter.

The whole “Time-lapse Animation” intro is simply there to make it look a bit more formal; no such company exists or is registered in any way.

The film is about two robots who run off of lithium-ion batteries and need to recharge every once in a while (denoted by their indicators). Wireless recharging benches are placed throughout the city and after an innocent robot tries to get some more juice, an arrogant, small droid makes a mess of the day; the contention escalates very quickly as the goal of the story was to have a decent amount of satire.

I logged a total of 746 work-hours on the short. PBR textures were downloaded from Poliigon.com. Music scores were provided by a very good resource, incompetech.com and SFX by zapsplat.com–definitely go check them out. I’m very thankful to the entire Blender community and everyone who provided resources and training that helped me achieve this goal.

I look forward to working on more projects and hopefully another animated film after some formal CS education. 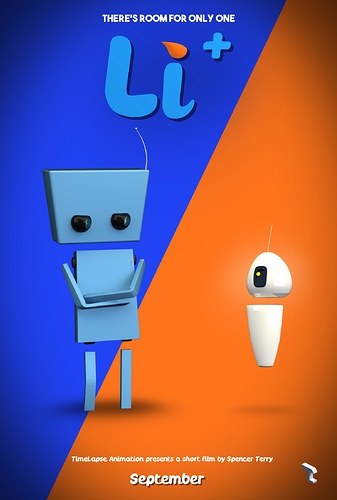 That’s pretty impressive! Was not expecting that ending, but I like it a lot!