Here’s a work I’m actually finishing for a friend.

This image is actually cropped, because I don’t have the rights to show the full image. 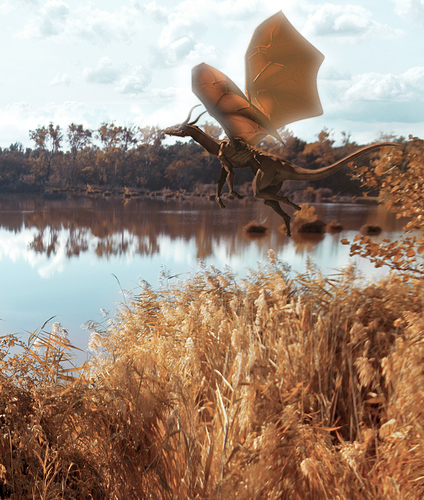 What do you think I should improve to make it look more realistic ?

I am not sure if realistic is a good idea, but nonetheless some things could be improved here. I’ll try to list them by importance:

Thanks for your reply !!

Here is the version I’ll give to the person who commissionned me. 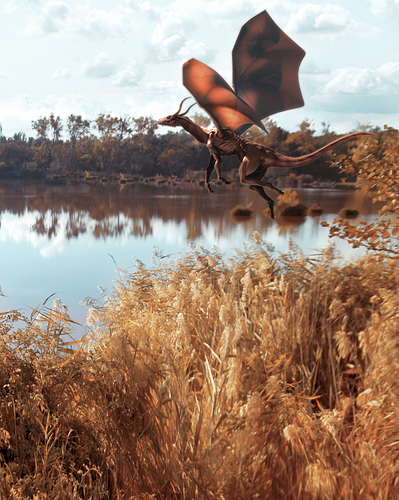 Concerning the image compositon, since this is a cropped version it’s useless to say anything about it. I think I managed to have it quite right on the full pic, though (I don’t have the rights to show the full pic, sorry).

I tried to work on the light again, now it’s more diffuse, and I added some highlights in photoshop

This should give you an idea of how it should look like: (composition wise, sculpt wise, shader wise, model wise, pose wise, and lighting wise)
http://www.3dtotal.com/index_tutorial_detailed.php?roPos=1&catDisplay=1&id=218#.Uu9k6Pl_sh8
Cheers!

Nice but the unsharpness of the photo doesn’t match the model.
The photo has a nearby focus punt, while the dragon isn’t, nearby that creates an odd effect.
Odd as that it makes a mini mini mini dragon the size of a butterfly
Think it would look beter if unsharp so you get the yeti effect like pictures (always unsharp ufo’s, yeti, bigfoot, etc etc).
Then it would be placed more to the back, and it will be a bit larger too.

Maybe you can give it some (motion?) unsharpness. (and the wings some more as they move).
The colors where not that wrong as animals use camouflage colors

The wing material seems to be a bit off to me, there’s quite a number of sharp transitions in the translucency (which is not good for realism) and the vein coloration almost makes it look like they’re meant to be viewed with 3D glasses.

The chest also looks like it could use a bit of work unless you mean for the Dragon to be starving and in a desperate search for food (as the rib cage seems to be quite visible).

The rest of it (especially the head) seems fine, it’s just that it could use a bit more modeling and material work, I think in this case there’s a high standard for realism to be reached since it’s composited into a photo.