This is a game idea I have come up with. Something like a adventure platformer game featuring a lynx (thanks drfeelgud88), the game will be made in Blender 3D. And so far it’s only me working on it, I post this here to get feedback and ideas. It’s always good to see things from another angle. I thought that if more poeple would join we could use msn to communicate. Below you can read some of the magic lynx. (Taken from Wikipedia).

The Lynx is an elusive, ghost-like animal that sees without being seen. Often called “the keeper of secrets of the forest”, its magical appearance stems from the mystery that such a creature’s secrecy can also be its strength. The Lynx teaches us that even the smallest can succeed in life, and that the world can unfold itself to those who stop and listen.

The lynx is not a guardian of secrets so much as the one who knows them, especially when it comes to those secrets that are either obscured by time and space or are completely lost to the world. The lynx is therefore associated with divination and clairvoyance. Those who seek the lynx may find difficulty in getting it to cooperate. Just because the lynx knows secrets does not mean it wishes to share them. Only by respecting the lynx’s behavior and listening carefully may one begin to receive an answer.

This power and ability to remain unseen attracted ancient warriors to adopt the lynx and, thus, they believed, its nature. Cunning, solitary hunters, lynx have large eyes and a keen sense of hearing which enables them to hunt at night.

Those who have been touched by the lynx’s presence may be given a boon and bane. A lynx may guide the listener to a secret, whether it be a lost object or a hidden truth that is somehow relevant at the present time. On the other hand, the lynx may be an omen to warn those who have somehow betrayed the confidentiality of oneself or others.

The lynx was chosen as the emblem of the Accademia dei Lincei (“Academy of the Lynxes”), one of the world’s oldest scientific societies. Its piercing vision was invoked symbolically as characteristic of those dedicated to science.

A classic Ps1 styled platformer game in third person. The gameplay is quite simple, you run around on levels that goes from point A to B and collects pickups. Not sure what kind of objects yet. While you are trying to avoid enemies, if they see you, you have to fight them. The graphic design should be in between realistic and cartoon style. See the Lo model below. Basically a game like Yo Frankie, but more realistic.

Story
-Working on it-

Name: Lo
Species: Lynx
Age: 22
Personality: Mature ninja
Info: The good hero that you follow through the game. A silent hunter, instead of strength he relies on his good sense of smell and his superior hearing ability. Like all other cats he is a loner that travels alone.

Name: Bjorn
Species: Grizzly Bear
Age: 35
Personality: Power hungry tyrant
Info: The grizzly bear that holds the forests of Siberia in a iron grip. With fear and the help of the wolves he managed to take control of the forest. He is a selfish tyrant, that doesn’t care about anyone but himself.

Name: Alg
Species: Moose
Age: 74
Personality: Wise guider
Info: The oldest and wisest animal in the forest, and the number one threat to Bjorn. He is hiding for the right moment to reclaim the throne.

If you want to join the team, you have to have msn and be fairly good with blender.

well, looks like you got it all planned out, well done.

Actually doesn’t look like he has much planned out at all. There are three characters you have come up with a bare minimum background for, a completely unoriginal idea for gameplay, absolutely no story or concept art, and an article you cited from wikipedia. Why should someone want to join your team if all you have is an untextured model that was created by someone else?

Actually doesn’t look like he has much planned out at all. There are three characters you have come up with a bare minimum background for, a completely unoriginal idea for gameplay, absolutely no story or concept art, and an article you cited from wikipedia. Why should someone want to join your team if all you have is an untextured model that was created by someone else?
Umm, the entire model was made by me, and it is textured. And the game play, I’m going for something simple. I don’t get why being unoriginal on game play is a bad idea? What do you suggest I should change in the game play then, while still keeping it a platform game like Yo Frankie?

You don’t always need concept art, but I could post some photos of siberian wilderness maybe. And I’m working on the storyline, it doesn’t have to be so complicated since it’s a platform game not a rpg. Don’t worry I got it all planned out.:rolleyes:

The programming part won’t start until 2.5 is released. So just content creation for now, if someone is interesting in helping you can pm me.

Those models are VERY good. Especially those eyes on that bear.

Why aren’t you starting programming until 2.5? The new python API works in 2.49 (and if you use an old API command, it will tell you which new API command you should have used)

nice models!
You do know that it might take a few months before 2.5 comes out? In that time, you can learn to code! truly, there is only so much you can do with just logic bricks.

You should learn how to code, it will make things alot easier to do. the models look pretty good too. 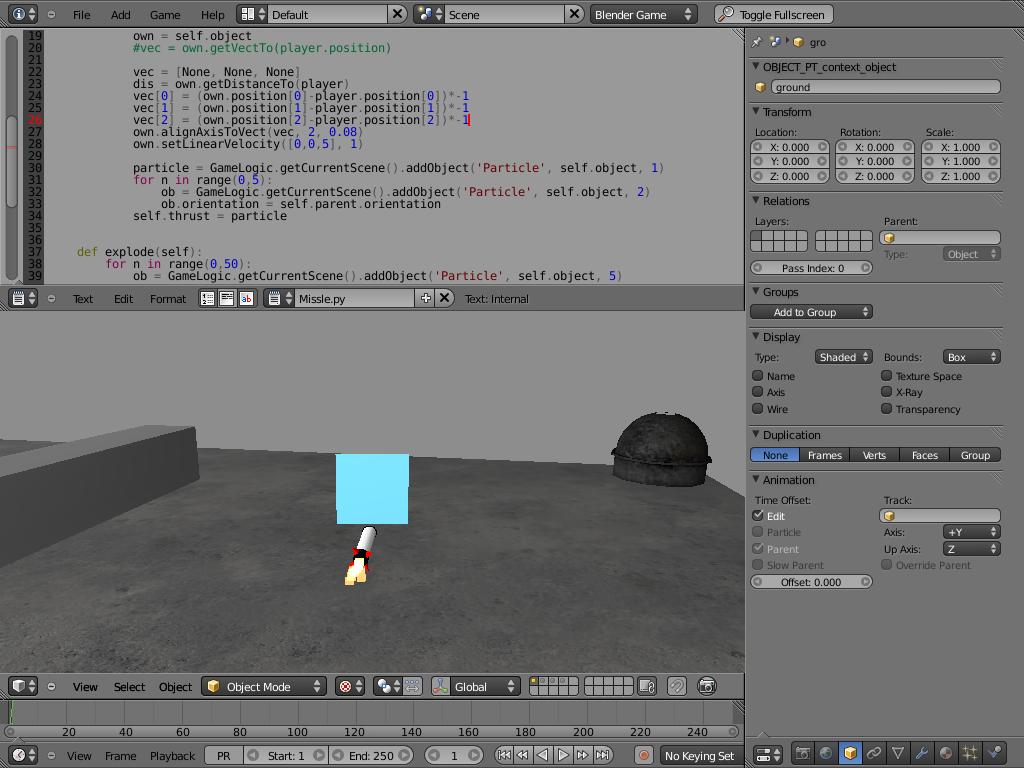 Cool, could you make a preview?

Cool, could you make a preview?

I don’t really get what you mean, “preview”?

which build of 2.5 were you using in that attachment pic, or was that just a pic from somewhere?

I don’t really get what you mean, “preview”?

overview of features why it is better than 2.49a

Haha, I didn’t mean to hijack the thread. So please, no more posts on 2.5

For a 2.5 build go to http://www.graphicall.org/builds/ and download a build with 2.5 SVN in its name. The higher the number the newer it is.

For reasons on why 2.5 is better, look in the News and discussion forum. There is plenty of 2.5 threads in there.

If you wish to continue this PM me.