A simple set up looking from inside a locomotive shed catching the last rays of sun on a winter’s day. Still plenty to work on - I want to include a light dusting of snow on the exterior to help transition the view from inside to outside as well as include lots of partially seen details on the interior. Also thinking about a full-blown rookery. 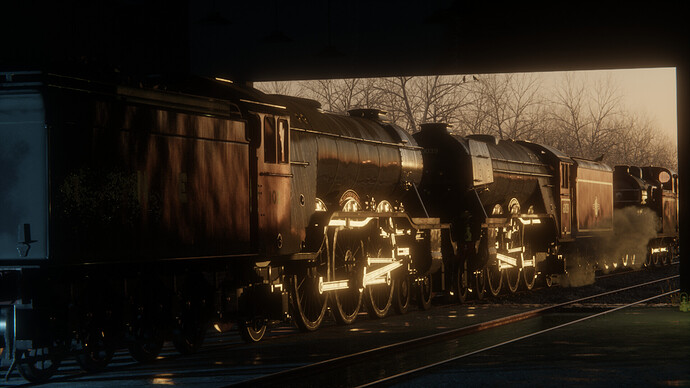 The locomotives in the picture are Sir Frederick Banbury (LNER 103 , black livery), Sandwich (BR 60039) and an anonymous LNER N2. This particular scene could never actually happen due to the time periods that these particular configurations of locos occurred in.

Everything is custom built except for the trees (Polygoniq) , and the grass (Graswald). The image itself is inspired by a picture by Liam Barnes which you can find on his Instagram account (@liambarnesphotography).

Here’s a clay render with the same lighting set up. 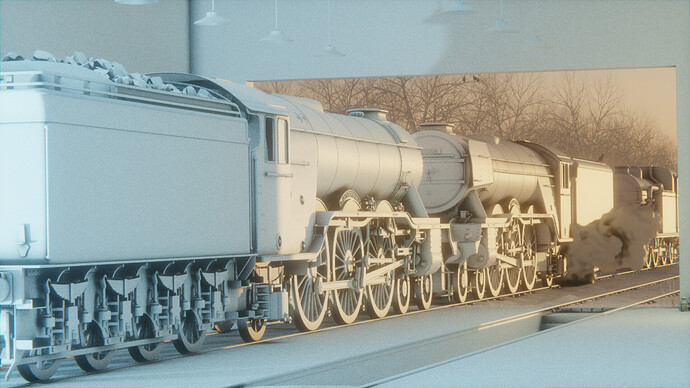 I’m using the Physical Starlight and Atmosphere to light this image, which means that it is relatively easy to play with realistic variations in lighting. Here’s another version a little earlier in the day. Rendering with different lighting is a good way to debug the model and textures. Let me know if you prefer the original sunset set up or the colder lighting of the earlier-in-the-day version. 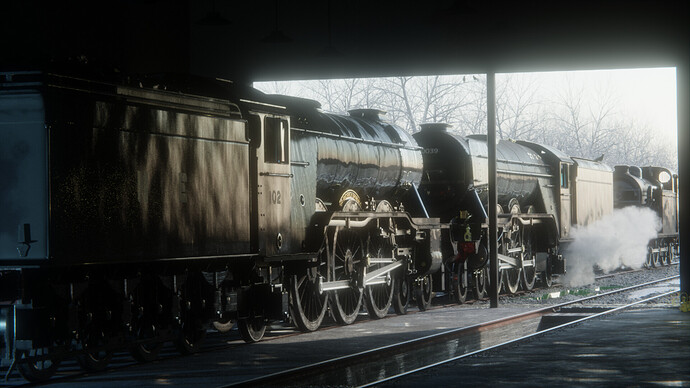 I think that the second shot works much better in terms of overall lighting levels – those connecting rods were far too shiny – but I do like the warm color-palette of the first, which feels considerably more dramatic. Excellent setting and modeling.

Shiny rods is something I hear a lot of feedback on. I’ve actually been working on the metal material of late (which is switched between the first and second image) but I’ve not yet done much in terms of the weathering. Ironically, most references for trains are of modern preserved locomotives which are looked after far more than they were when running for real.

I’ll put up a render with some improvements to the metal this weekend (hopefully).

I was working on a different project and playing around with the idea of rendering versions of the scene with different lighting setups, and then mixing them using the mist pass. I tried this with this scene, using the warmer sunset render for outside the building and the cooler daytime render for inside.

I’ve also added a little bit of extra detail in the form of a bike leaning against the right hand wall. 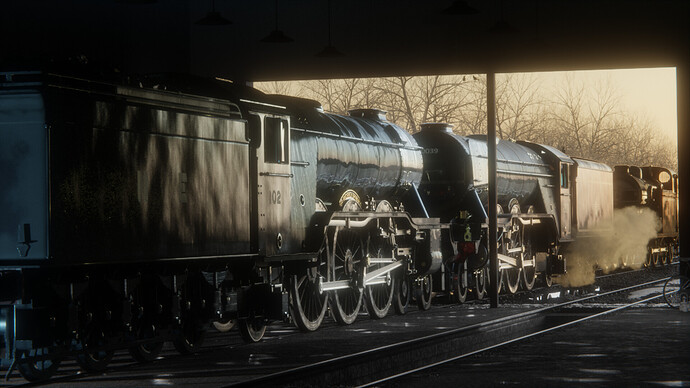 Some small adjustments to the concrete floor as well as the addition of better modeled puddles. 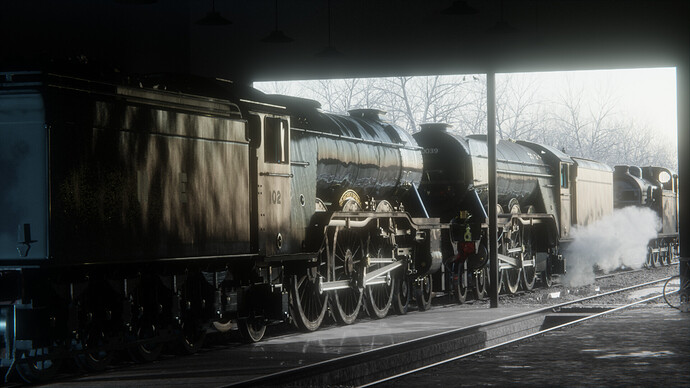 I’ve been experimenting with some alternative lighting setups. Primarily adjusting the elevation of the sun outside the shed, but also with some variations that include the internal artificial lights and some external lights. These setups explore how to connect the interior and exterior parts of the picture.

The first has a low sun and very low interior lights - just catching a little of the smokey atmosphere. 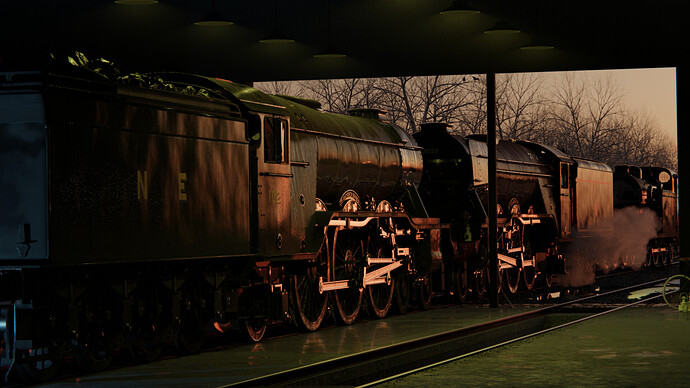 Next, I’ve increased the interior lights which creates more variation in the colour across the image. 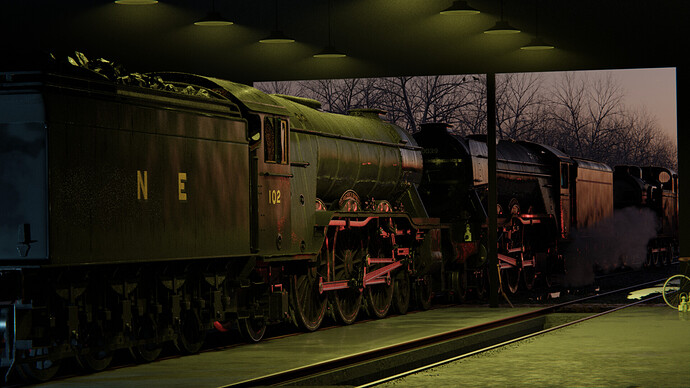 Here, the sun is completely set and the only light sources are inside the shed. 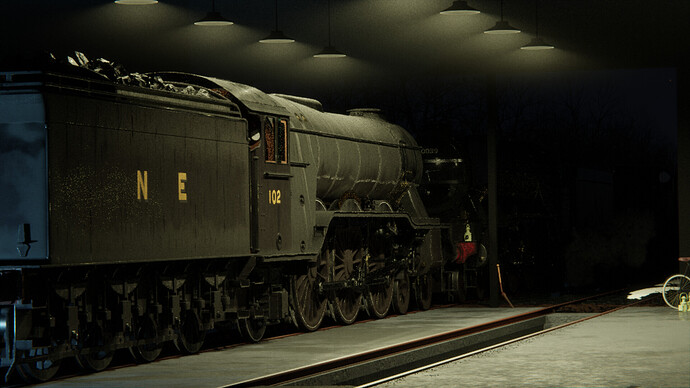 Finally, I’ve added some exterior lights to hit the locomotives outside. 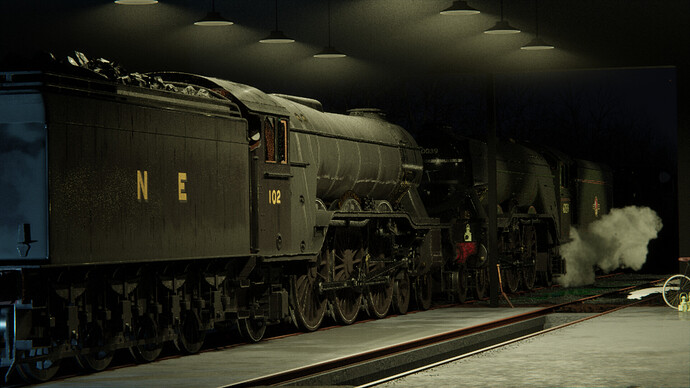 I’ve finally put together a procedural brick shader that does most of the things I need and have tested it out on this scene by updating the shed materials to be bricks (rather than flat, high roughness materials).

The bricks are a background character to the locomotives, but I think they add depth to the picture. 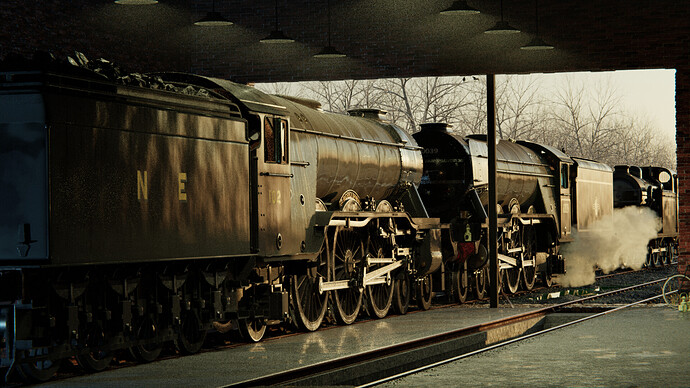 Nice, my only complain are that locomotives look to shinny - clean. They are much more dirty in real life… don’t forget that locomotive have a chimney that discharges a lot of soot, very greasy soot. When you touch it, your hand become black and greasy, hard to wash.

Thanks @alekba. I recently had a request to produce a picture of a newly minted loco in a clean condition (ironically). As the current model has the weathering and dirt built in to the shader, I need to rebuild the materials from the ground up so that I can independently control for the amount of dirt. Hopefully at that time I will be able to apply more dirt than currently is on there. When I have the set up, I’ll probably post some pictures of the progressive weathering from clean to full British Rail dirt.

One thing to keep in mind - at one time, these locos were brand new and there are some pictures of them coming out of the assembly sheds gleaming and spotless.

Well this explain all. Customer words are law.
You have right, in one moment all things are brand new, shinny. Like medieval castles, however in most movies castles are weathered with walls covered with lichens and moss… simply, human brains expect to see such things… And they also look nicer

There is something epic in steam locomotives, all this moving parts, steam, sounds… Modern slick trains don’t have such appeal.

Agree on all your points about the context of historical visualizations. I do think that a big part of the appeal of trains is the nostalgia. I actually feel nostalgic about the Inter City 125 which was the iconic new train from my childhood. The more recent long distant workhorse in the UK is the Hitachi Azuma - I think it has a great look. I just can’t find any good reference material to model it

Anyway - let me see how I do with a really filthy steam loco in the near future.

An update to this image in close to final form. Major changes in the approach to steam as well as numerous detail changes and a nice long render. 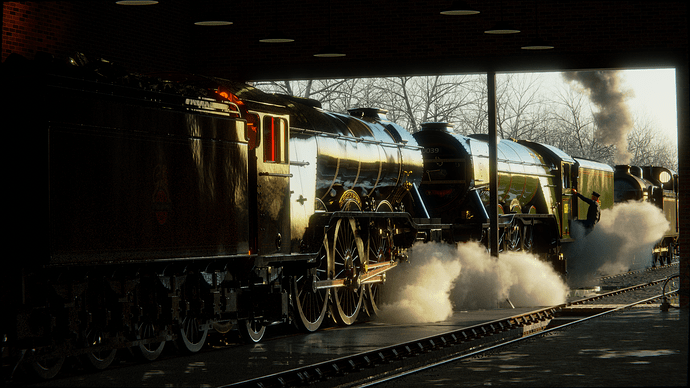 The only thing that I would “categorically” suggest, both in this latest image and even in the very first one, is that "the highlights are a little “blown out.” (Did the locomotive company really select “gloss” paint, and no texture?)

Also, there’s really not much apparent variety of lighting color. For example, since these locomotives appear to be emerging from underneath some kind of trestle, might there not plausibly be some light, perhaps bluish, coming from behind the camera to gently illuminate the spaces at twelve and nine o’clock?

Thanks @sundialsvc4 - feedback is greatly appreciated. The compositing in this render actually has a glare node which I’m frankly in two minds about using. The paint material actually has a lot of detail in it and I think the issue you mention is more about the presence of dirt than paint texture. I deliberately dialed down the amount of dirt in this picture so that I could get a lot of the sun’s reflection, but based on your comments I think I’ll explore some variations. Regarding light sources internal to the shed, this is simply an artistic choice to have the viewpoint in shadow to give attention to the interface between the inside and outside worlds.