Very nice , love the details , and the modeling and the … just fantastic

Messed a bit arround with indigo but to get some reasonable results out of it i need to get some experience. 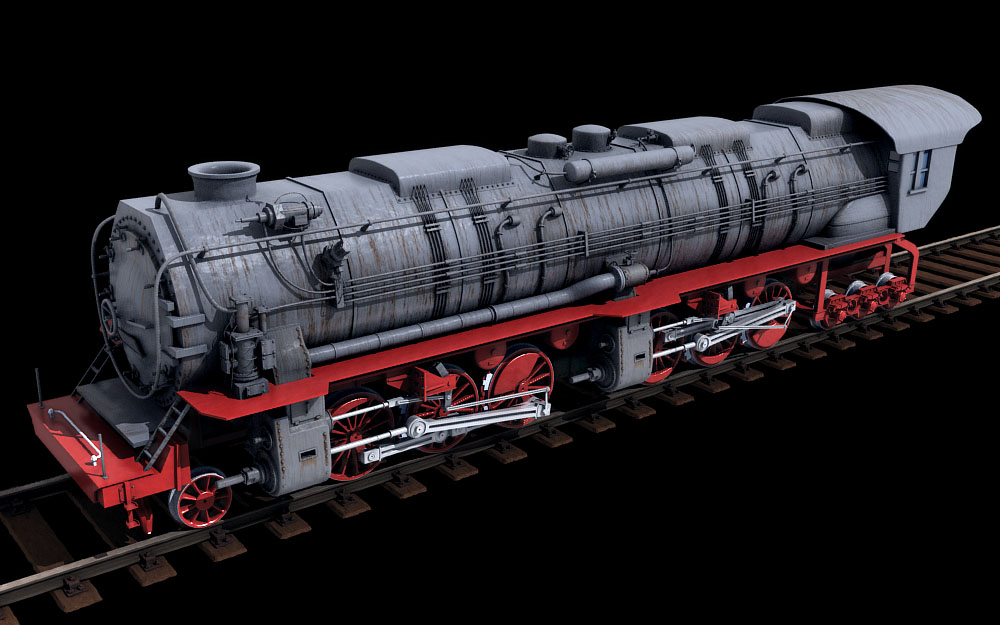 I think i now know where this image will end. I will try to let the locomotive look like it is standing there for quite some time perhaps add alot of plants which cover a bit of the train and some other stuff. 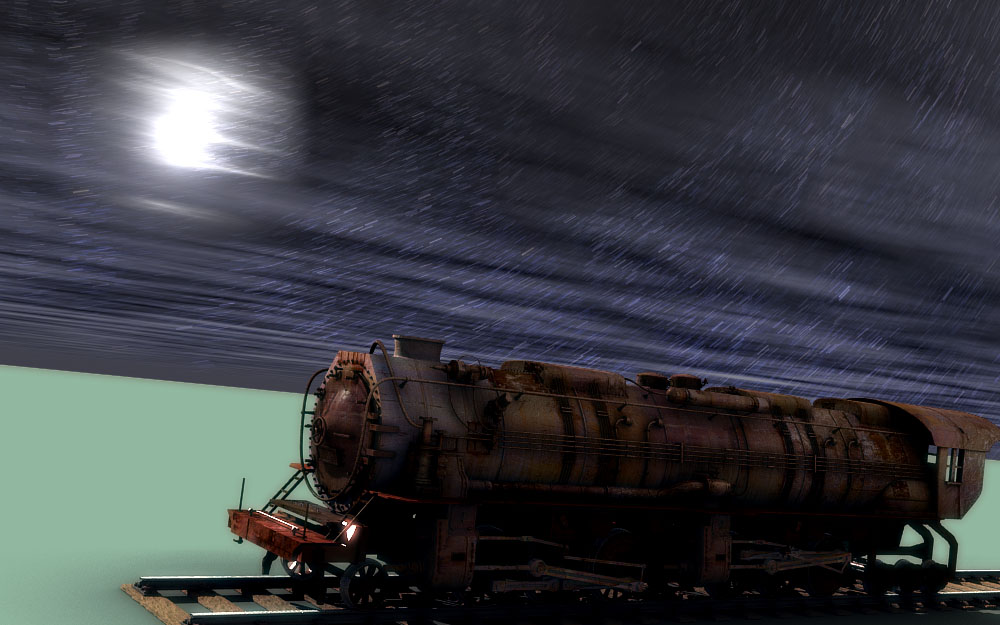 Great sense of mass & scale. Looks quite feasible even though fictional.

Still alot of work to do and i also have to solve the problem of brightening the image (it’s really dark ;)) without loosing the night feeling.
The tree is done with the wonderful!!! lsystem and a bid aftertuning. The grass is a big plane with lots of particles and the flying leaves are dupliverts emitting planes. 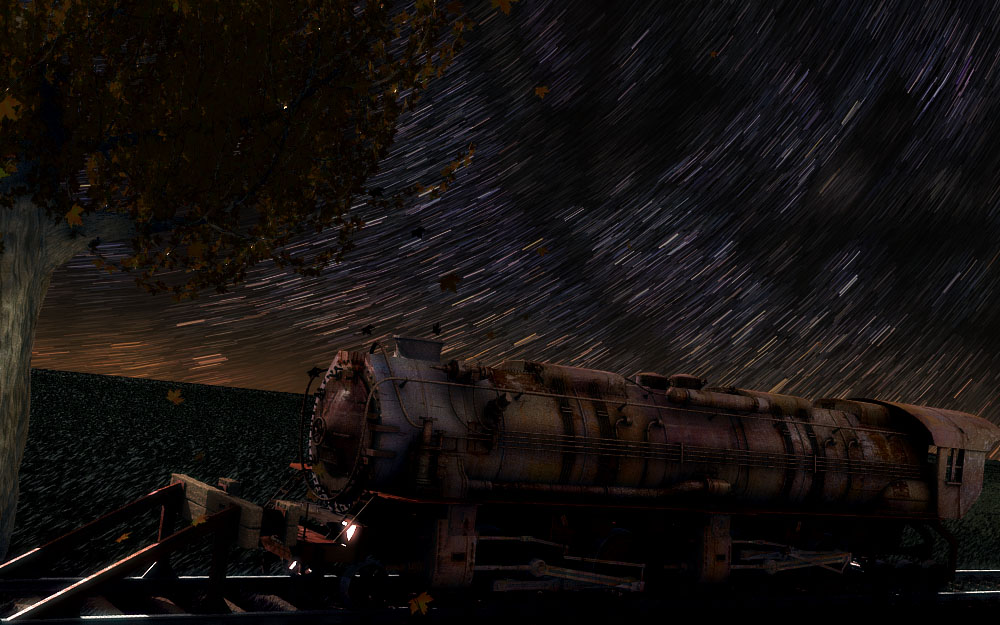 Wow, this is a VERY impressive model and render, great work!

My only crit as of now would be that the rain in that last pic is a little to curved.

I hope you are kidding because that are suppost to be stars like here or here. The german word for that is “Strichspur” (dunno the english version). It’s just a long exposure with an unmoved camera.

The scene doesn’t do the engine justice. The detail of the model simply is far above the standards of the rather simple, uninspired scene. The angle of the view also seems too distracting, at least to my taste. The train model is excellent, and I highly encourage you to sit down and try to come up with a more interesting landscape for it to live in.

Terrific model. I’m a lifelong train buff and I’ve always wanted to model a locomotive but never really had the patience.

I agree with PlantPerson – the star-trails are very Starry, Starry Night but really distract the eye from the locomotive. The tree’s OK as a model but isn’t in a good position for the composition and is much too large, it nearly ruins the scale of the loco.

Some suggestions: Use a medium to low-energy bluish Sun lamp situated nearly directly above and a bit behind the loco to cast rim lighting on all that gorgeous detailing, ala full moonlight. You have a few sharps (bright highlights) at the front but it needs some all along the length.Use a cool (bluish) area light for your key light but position it so the shadows are still fairly deep – that works well. This will help sell the “night” aspect. Keep the sky very dark with only a few recognizable stars – just enough to sell the “sky” concept. Compositionally, raise the loco in the frame, it’s being compressed by all that sky space, and think about using a POV that has the train moving more toward the viewer than across the scene, with maybe a wider lens to emphasize perspective and pump the scale a bit.

This is a primo model and deserves the best display you can give it.

If you apply a dark blue shade to the whole image, it will appear nighttime and you can lighten it up a bit. Nice modeling.

Thanks guys for all the input i will defenetly work on the scene.
After a fast redo of the lighting i can see your points that there needs some serious working on that. The next render will show more details of the model.

The achievments of this evening.
I think the perspective makes the locomotive now more massiv and also pushes the attention to it. The lighting needs still some tweaking but i think it’s alot better than bafore (thx for the tips :)).
I like the specularity on the front panel and i tried to make some other parts showing a bit of spec but it wouldn’t look right so i will propably add an artificial lamp or at least play a bit around with it.
The ground is just a placeholder for now because i don’t really like the grass anymore… :). 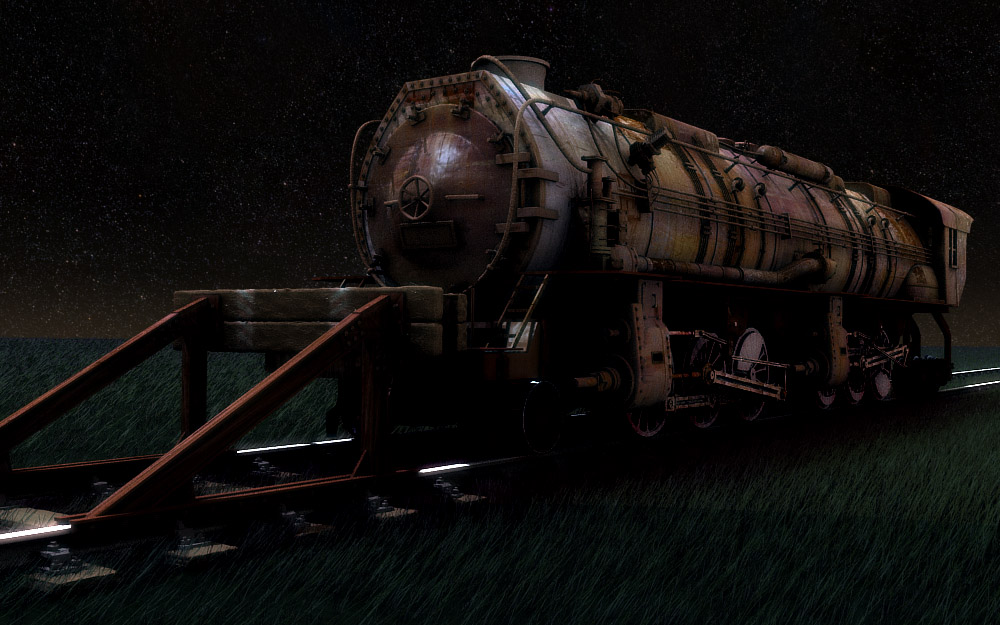 It occupies the picture space with proper authority now!

Shows off the excellent texturing as well.

BTW, there must be some big ol’ cows where this thing runs, 'cause that’s one heckuva cow-catcher

Is it based on an actual structure (I’m not a train fan, so pardon my ignorance)?

I don’t think that’s a Cow Catcher Chip. Just a stop to indicate the end of the rail.

I like it a lot. I think you should give this piece a name like…
"The Old Girl:
“Abandoned”
“Iron House - Out to Pasture”

I don’t think that’s a Cow Catcher Chip. Just a stop to indicate the end of the rail.

Well, I sure earned boob of the day :o. Of course it is.

However, that brings up the question of the condition of the rails and cross-ties, they don’t seem to share the time-worn character of the locomotive.

Whoa that’s amazing, I love the level of detail.

A couple of things bother me though, the rail looks very new and shiny, and also, the stopper seems to be a bit too high, it wouldn’t hit the right part of the front of the train (I think). But other than that it’s absolutely beautiful

It occupies the picture space with proper authority now

:D:D nice words
Actually that’s a Cow Catcher but the problem is that some idiot attached it to the rails. That’s also the reason why the train is rotting there

Yepp rails t(.)(.) shiny. Wheels will also get some textures and the wood looks a bit like choclate. Material work is in an infinit loop

About the stopper… i actually wanted to add a cow catcher and i haven’t given up on that so the bumper would be in the right height. But at this right moment its too high. Or they changed the iso height in the official national cow catcher papers so the train would seem to be even older :).

About the stopper… i actually wanted to add a cow catcher and i haven’t given up on that so the bumper would be in the right height. But at this right moment its too high. Or they changed the iso height in the official national cow catcher papers so the train would seem to be even older :).

Okay, as an engineer, this made me laugh. I hate it when ISO can’t make up their minds about cow catcher specs!