I would want to hear your feedback about the scene I created.

It’s a “company logo” (nothing too serious) for a friend. This is the original logo, but I never liked it, mainly the hands.
On the internet I found this image that inspired me, so I developed the scene.

One area where I need some help is color. I’m a bit colorblind, so I would like to hear some feedback about the color correction I used and the tint in general.

Another area I’m not so good at is the background. I’m happy about this one, but some feedback doesn’t hurt (I hope :D).

This is what I consider my final image 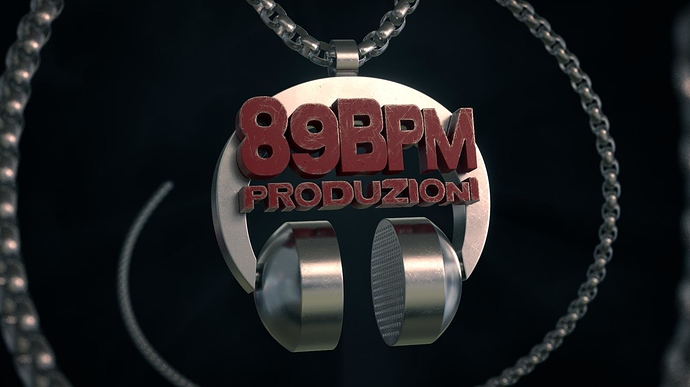 This is the image without the color correction The text material is based on textures I created with Substance Painter (to learn it is the main reason I started this project). The pendant and chain are loosely based on the new tutorial from Kent Trammel.

I would like to hear what you guys think about it

PS: the compression is strong with you, young padawan. It heavily alters the background, so don’t focus on it too much… ^^’

So is everything ok? Lighting, composition, materials.

I know the difference between the two images could be subtle, but when you are colorblind, especially subtle changes are hard to be noticed

Looking good, although I am not quite sure about two or three things:

The color looks good to me, and I quite like the kind of used look of the materials.

Thank you Triastase for taking the time to write your answer

The image is an exercise I’m doing to learn you things and I only want it to be a cool image.

I agree with the emptiness thing. I added the chains with the purpose to partially fill those empty spaces with something related with the rest, but probably it’s not enough. If you think they are distracting, I can try increasing the vignette effect or render them in a separate layer and darken it a bit or/and make the smoky background less subtle.

I also thought to add some ash particles to increase the dramatic look of the image, but I posponed the idea for technical reasons (I have to experiment how to achieve a good result

The chain in the back is also used to take advantage of a principle I saw used in many good artist’s works. It serves the purpose to guide the eye on the text it points to. Considering that I’m not so sure I can let it to continue indefinitely.
I could try to terminate the chain with a clasp, like a lobster claw or spring ring (lol, I studied their names), but I don’t think that’s what you mean.
Alternatively I could try to extend it and let it fade in the background.

I tryed to tweak the image according with the feedback received and what I think could be cool.

I would like to hear what you think (and if it’s better or worse than before). but I think there is still too much empty space. I would recommend changing the ratio to be more quadratic in order reduce the empty space to the right and to the left of the logo.
What strikes me as well is the route of the strings. There seem to be two quite strong kinks in the chain right above the top border of the image. Maybe this is because the chain is fixed to some sort of attachment there but if this is the case, I would include this attachment in the render because otherwise the chain’s route has an irritating effect.

I tryed with a square version 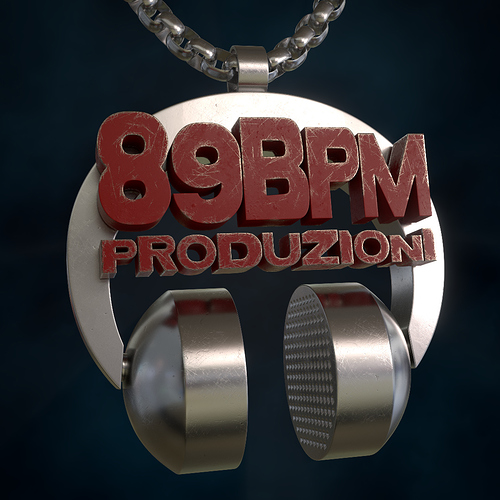