Recently I found some time to create some fan-art for a music band, which unfortunately stoped to exist.
So in memoriam of them, I imagined what their last, final album cover art might have looked like.

The following shows the up-to-now final: 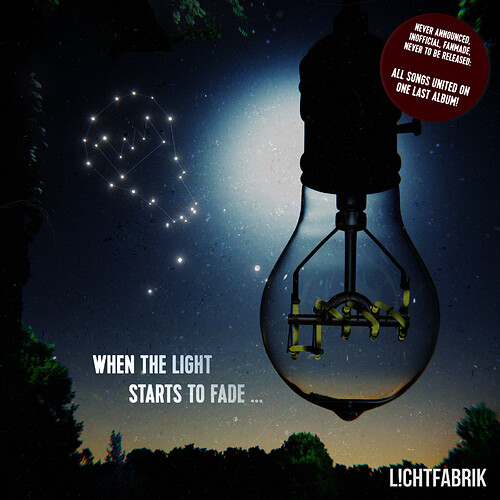 The story I want to tell is that even though the band stops to exist (the fading light of their light-bulb-logo) the memory of them continues to exit (visualized by showing the logo as a constellation in the night sky). Now I am wondering if this story can be read by just looking at the picture or if there are better visual suggestions about how to archive this.

While writing these lines, the idea arises that it might be even more atmospheric to consider putting the scene to a workspace within a factory workside. The constellation then shall be visible through a window and the light bulb could then be implemented to a desk lamp … let’s see. What do you think?

– – – A bit of a deeper insight to the development of the scene – – –
How did I actually ended up on this scene?
First of all, a great thanks to “Fun With Open Source” and its time lapse sealed light. Using the slow-motion option of youtube is perfect to follow those time lapses. 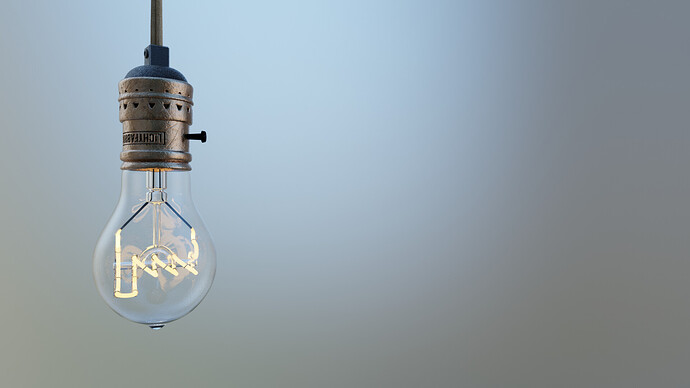 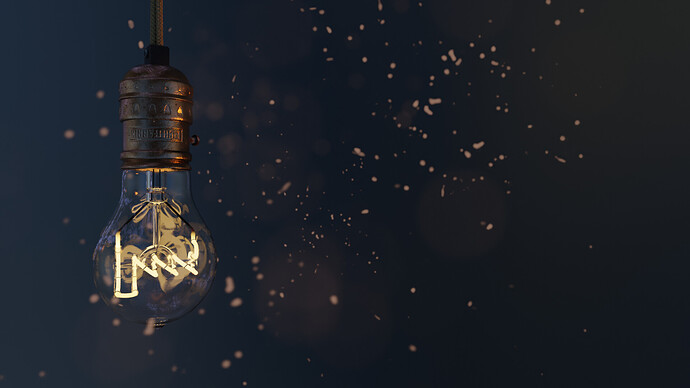 Lichtfabrik_0Second1920×1080 147 KB
… and started to think about a scene with even more light bulbs involved. 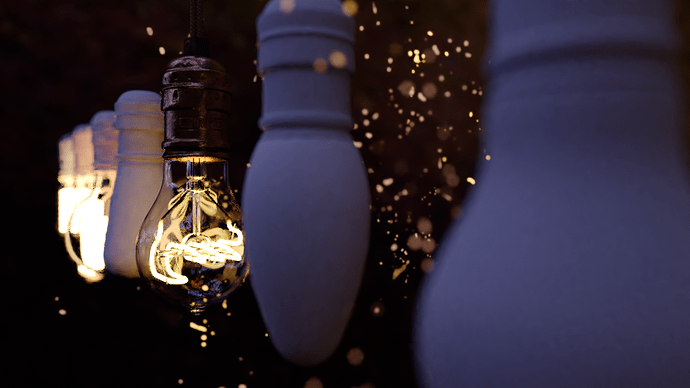 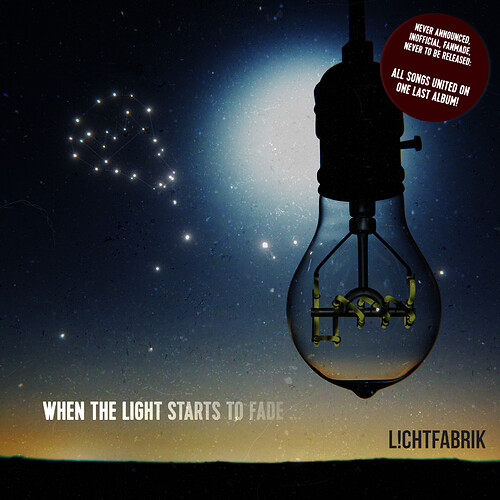 nice work,
i did not undestand the idea

going to the happy hunting ground

Does this means a transition from sky to earth in some way ?
If so may be putting the bulb far away from the foreground, with a long cable (sad for your great setup inside the bulb). 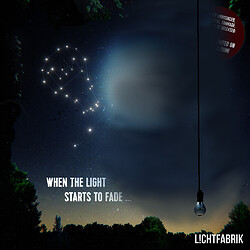 Your second options with the factory sounds more explicit imho.
If i don’t misunderstand the idea you search to convey.

rephrased the post and replaced the “happy hunting ground” by a less metaphoric explanation:

The story I want to tell is that even though the band stops to exist (the fading light of their light-bulb-logo) the memory of them continues to exit (visualized by showing the logo as a constellation in the night sky). 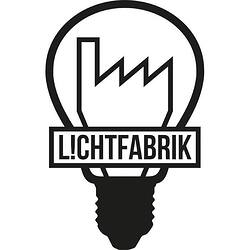 I like all the things you did with this. The only suggestion I’d make is that, if this is/was the band’s logo, the lettering in the filament should be very bright, definitely in front of the crossbar and not blocked by it, and maybe a little bit of “glow” should be added around it. The moonlight in the first shot is very good and the constellation is inspired. But, I’d really want to have the lighted text have “punch” and really stand out even with the moon behind it.

Hi,
I really love the work you made.

By looking the picture for the first time, the message I got was that even though something is ending (the light buld stopped fading) it doesn’t mean it is forgotten (the constelation is shining in the sky reminding us of the bulb). So for me the picture worked perfectly, since I understand that this was the meaning/story you were trying to communicate.

Some changes I would make:

Also since the band its literally called “light factory” i think that the idea to put the scene in a factory is brilliant, you should definitelly try it.

I hoped that I was helpfull. All in all I love it, you trully nailed it!