Looking for feedback on a few scenes - new to Blender

About a month ago I started a “one scene a week” challenge to create from scratch a complete project in 7 days. My original goal was to do this until the end of the year, but I am having doubts about my progress so I was hoping to get some feedback on the four scenes I’ve done so far. A little background on me - I have no artistic background whatsoever, and I started learning Blender in early August 2017. Did a few tutorials and experimented a bit, but I felt like I wasn’t getting anywhere, so I challenged myself to come up with an idea for a scene and do it in week. The deadline definitely helped me stay focused and put the time/work in, but it also forced me to make tough decisions about each scene as I’m sure you’ll notice in the images below.

The most important thing I’m looking for in feedback is whether or not you think I have potential and if I should continue pursuing Blender. I’m still at the stage where I don’t know what avenue I want to go down (architectural, character design, game assets, etc), but my ultimate goal would be to pursue a career. Critique on each scene would be fantastic too so I can learn what I’m doing wrong/right if I do continue along. I’ll try to keep the rest of the post brief but I will include a few thoughts on each scene.

Week 1: Island
https://drive.google.com/open?id=0ByNl90odIwoednJTQ1haWW1wMUk
(I had to attach this as a google drive link because the forum only lets me attach 3 items to a post)

This was supposed to be a sunset over an island scene with the sun setting on the right hand side of the scene. I know the water doesn’t look right and the island mostly looks like it’s made of sand and dirt. 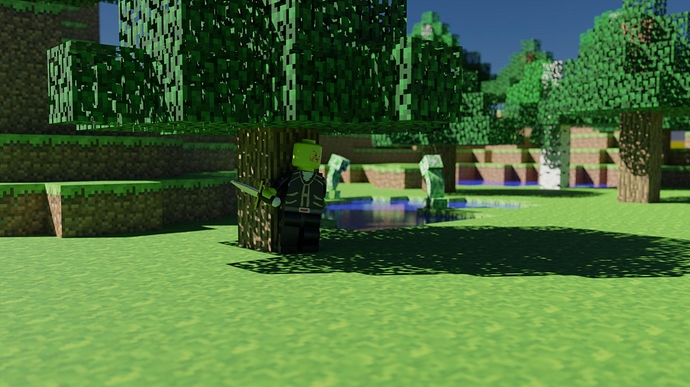 Out of the four scenes this is the one I think I did a pretty good job on. I ran out of time while working on the LEGO minifig so I had to do a really quick shirt and belt texture for him that looks pretty bad. 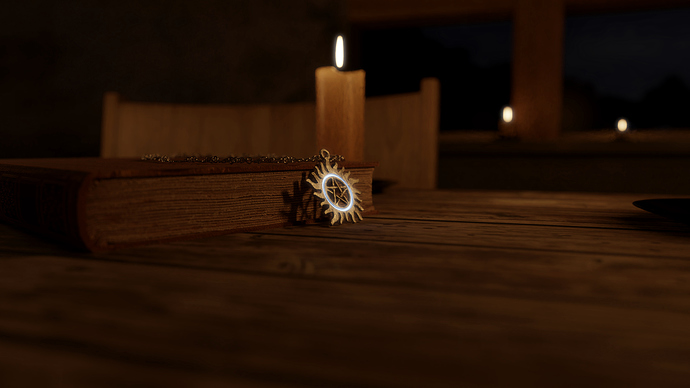 Except for the symbol, this scene is pretty boring. Unfortunately most of the week was spent working on the symbol, so I had very little time to model the room and candles and such. It was REALLY hard to get the lighting to look how I wanted it (I was going for a very low light, candlelit mood with just a tiny bit of moonlight coming in from the windows) 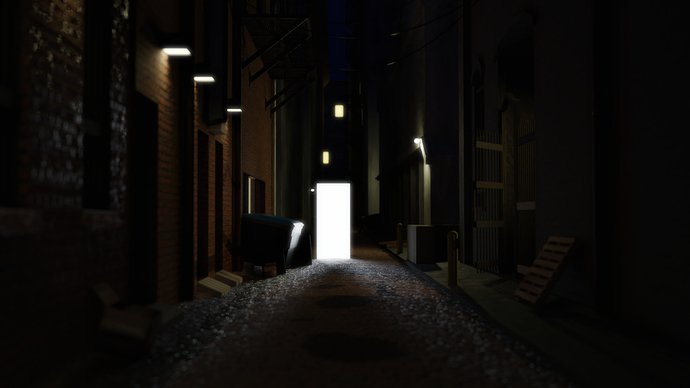 My original plan for this was to have my LEGO minifig sort of peaking out of the light doorway with his dagger, to kind of make it like a Halloween-ish horror scene. Unfortunately I think I took on too big of a project for my current skill level, at least in terms of getting it done in a week. I spent a huge amount of time just modeling the alley and the (few) assets to flesh out the details. I also made a massive mistake at the start by not using real world scale. Because of the FOV of the camera and the way I started, the street ends REALLY far out into the distance. This caused me major headaches. Some major problems with this: no debris/trash on the ground, far too many sharp 90 degree edges, materials are really bad especially the buildings (no signs of wear/dirt/grime/etc).

The alley scene was my most recent one and this is the one that has really got me questioning if I should continue to learn Blender. As I was modeling it I thought, “Hey this might actually look pretty good when I’m finished.” Once I got to materials and lighting, it was more like, “I have no idea how I’m going to make this look good even for a beginner.”

Thank you for taking the time to read my post and provide feedback!

Just wanted to update my post with a new image for the Alley scene. I added volumetric lighting and some minor post effects to see if that would improve the scene. The render time skyrocketed after I did that so I was only able to get one render done. Even with a TON of samples (it took 19 hours to render) there were still artifacts. I think it improved it a bit but I think it might’ve been too much fog. 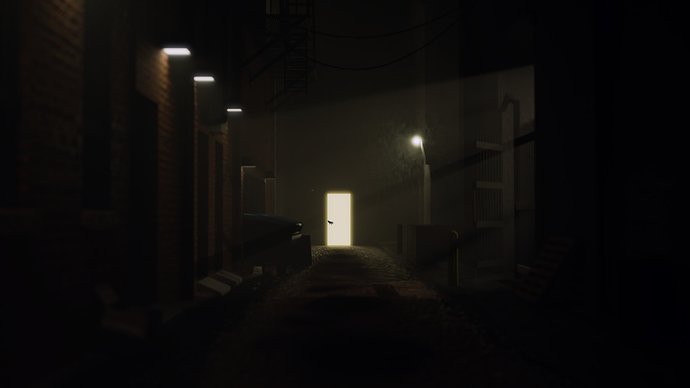 these are great man, you said you only started in august? If so you are doing pretty well and I would definitely continue learning!

week 1: The lighting and water are fantastic no problems there. I would flatten the island, and make it a bit larger, have a much more gradual slope on the shore line. also the scale of the bump/normal on the soil seems much too large, I doubt you’d even be able to see the roughness at that distance and its a little shiny, too much spec possibly? the little boat is very cute though.

week 2: I like this one, not much I can see wrong here, looks like a screen grab from the game. Maybe a little too much green saturation, easy to fix though take it into photoshop or gimp and adjust the colour value’s/saturation. Nice use of depth of field.

week 3: This one’s my favourite, Once again nice use of depth of field, the only pointer i could really give here is to look into creating specular maps, they push the realism x2 at least, I think the table could use this.

week 4:Things go a bit wrong here, no.1 you attempted to finish a street scene in 1 week haha I think you would need more time to complete this. The biggest thing that sticks out is scaling. It’s all over the place, it gives it a feel like you took a picture of a minature town model with a large camera. everything is too sharp, the edges are all 90 degrees, you need to break it up a bit too look more organic. Im unsure what the large rectangle light in the middle of the picture is? why is it there? and too much dead space, add more dirt/grime or rubbish bags but you pretty much already knew that as you mentioned most of my points in your post. Don’t worry about it not every piece works, I have TONS of dead projects in folders. Your progress is great keep it up and you’ll be producing amazing piece’s in no time. Just remember to keep actively learning! don’t just produce piece after piece without learning something new! This was my biggest mistake when i started 3d. Remember you are not going to get better by just repeating what you already know.

timmy6151: Yep started learning early August with Andrew Price’s donut tutorial, and did a few more other random tutorials by him and CG Geek until I started my challenge in late September. Thank you for the compliment and encouragement!

Your critiques are exactly what I am looking for!

Week 1: I struggled to get the island as a whole to look realistic. I couldn’t quite figure out what was wrong with the materials but now that you mentioned the scale, you are exactly right. The scale of this scene in general was really hard to get right for me. In fact the only scene I used real world scale units was the Minecraft one…and I think that really made the scenes more difficult to work with.

Week 2: I didn’t do any compositing on this one and I agree it definitely could use some color adjustment.

Week 3: With regard to specular maps, I was using the principled shader in this scene - I thought that the specular field was already “correct” so a map wasn’t necessary? Or are you referring to the roughness/gloss? Materials are something I’m still struggling with. I want to learn how to make my own roughness, metalness, normal, etc., maps from a base color texture.

Week 4: You are absolutely correct about the scale here…I tried setting up the scene by using a background reference image, and that ended up messing everything up really badly. I should’ve done a rough layout first using real world units and then adjusted the camera to get the effect I wanted. This one I considered a failure, I learned a lot but I just didn’t get anywhere near close to what I was going for.

I made sure every scene I did I was learning some new skill or technique, and honestly I learned so much in the month of doing this that I’m going to have to go back over the scenes to remember everything I learned. I was very reluctant to post this stuff to a Blender forum but my friends and family can’t give me the type of feedback I need to improve.

Thank you so much for your comments and critique!

i hope you will forgive me for addressing the big questions in your original post, instead of a focused critique of the pieces themselves.
first of, the idea to make a scene a week is splendid! it is a good way to improve your skills quickly. if you can continue doing that, within a few months you will probably hardly believe the amount of improvement you will have achieved.

now, about pursuing blender/career. the cg industry is HUGE. there is hardly a place where cg is NOT used today. outside of the entertainment industry (which is the obvious use case), you have CAD/BIM drafters, designers of all kinds, science viz and sims, engineers, cg for medical uses, and the list goes on and on. if you look at the list of presentations at the blender conference, you will see what i mean.
so i would say that your first question should be how much do you love using blender? if it’s something you really really love/enjoy/obsess about, than most likely you can find a career in this field. (it may not pay as much as you like, and it may not be all glitter and gold, but a career it will be!)
the way i see it, the question is “do i love blender/cg enough to work hard in this industry”. because in a lot of places the competition is fierce, and you will need hard work to build a career.

Thanks for your comments oris!

I’m going to move to a “one scene a month” schedule at least for the time being. I did some quick math and while I was doing this challenge I ended up spending between 15-20 hours each week working on each scene. That might seem reasonable, but I also spent anywhere from 5-10 of those hours researching how to do things and that time took away from working on the scene itself. A month should give me the time I need. After I do that for maybe half a year or so and get some skills under my belt I think I’ll be ready for a one per week schedule.

As for the CG industry - the possible paths are almost overwhelming! I don’t know what I want to do yet, there are so many really interesting and rewarding avenues to go down. I’m loving blender enough right now that I’m willing to put in the hard work and time though.