Looking for people to work on a project with

Wrong place to post this, but what sort of project and what skill level?

You might want to post this in the Team Projects forum in the Game Engine section of this site, if it’s a game project you have in mind. You would get more views from people who might be interested in that. This forum is for works in progress, so unless you’ve already started something that you want to show off, most people will just ignore your post. Just letting you know so you can get the right people’s attention.

Since you’re new to the site, you might also want to give people an idea of what you’re skill level is and what kind of game you have in mind. Being totally vague about it doesn’t attract many likely volunteers.

I would be interested in doing some modeling if it was the sort of game that I felt I could contribute to. My own skill level with Blender is not so great in any particular area but I understand how to use a lot of the features.

I started building a tank simulation game using physics and some of the basic game logic features, and it was turning out pretty good, but about a year ago I put Blender aside and haven’t got back to it. I just started working with Blender again very recently. There is much that I have forgotten and need to refresh myself with, but it all comes back quickly!

Here’s a short video of my game-in-progress showing a test of the sensor logic. The red lines are there to show the tracking of the enemy paths to the green tank which must kill them before they get him. The enemy is stationed around the board and use sensors to locate and track the green tank. This is about as far as I got with it: 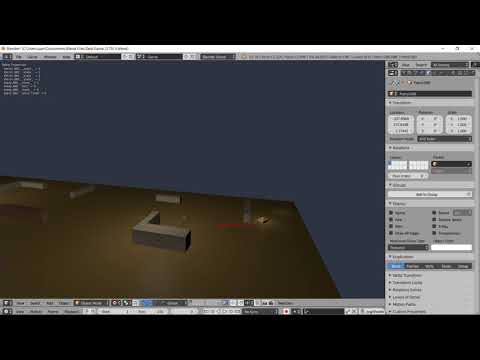