Hi,
It’s my first topic on Blender Artist.
I would like to show here some piece of sculpt I’m working on, made in Blender.
I hope you’ll comment an criticise.

This one is made from the Ben Simond’s basemesh

I created a couple of base meshes recently to give me something to start with when sculpting heads and bodies. I thought I’d make them avaliable. I’ve also included a GLSL matcap materi…

I will try to post as often as possible.

One thing to keep in mind is that you should try to subtract as well as add clay to your basemesh, otherwise it starts to just grow and grow outwards and you end up with the “big” look that I can see a little of in this sculpt.

Thx for your advices Ben.
You are right, about the “big” look, i’ll take care of this for the next sculpts.

What are you planning on working on next? I’d recommend focusing on the ears. The details seem a bit fuzzy in that area and it doesn’t look like it’d take much time to make them perfect at this point.

Also, his jaw seems a little puffed out to the sides. I don’t know if that’s because you’re giving him a full beard or not, though.

His skull might be a bit large in front as well; Perhaps a bit too round up top.

The cheeks look magnificent and the mouth is coming along great. The eyes seem a bit flat. Maybe consider using separate spheres to define those instead. That’s just my opinion, though.

Would you mind posting a few angles next time? That makes it easier to critique as not every anatomical inaccuracy can be detected from the 3/4ths view. Front and side ortho would be nice.

Thanks for your detailed feedback Zeekar, it really helps.
You are right about all you noticed. Thi guy has a half beard, it explains the puffed jaws.
To be precise and honest, I sculpted this piece in half an hour, looking at this image from Charles Woods :

(I should have putted it in the first post, I apologize)

The aim was not to reproduce it but to give hime the same character or personality.

The next one will probably be a woman or a child, inspired by the Philippe Faraut’s work.

Thanks again, both of you for watching.

PS : sorry for the bad english

You did a great job and I think the difference is that the bust has far more intense features than your model at the moment. He looks contemplative and inquisitive, yet stern and opinionated; like an elderly scholar or perhaps a professor.

Yours looks a bit like Captain Picard looking at himself in the mirror and suddenly realizing that he let his beard go. Sorry about that, my mind went off on a weird tangent there.

Anyway, if you got those results in a half-hour, I can’t wait to see what you’ll do with another 30 minutes.

Maybe you can keep it looking like Picard, though. That thought was pretty hilarious.

This time I’m dealing with a hard piece of work.
I really love the work of Philippe Faraut, and I would like to reproduce one of his sculpts.
Here it is : http://philippefaraut.com/gallery.php?id=73

Here I am after an hour of sculpting from another basemesh: 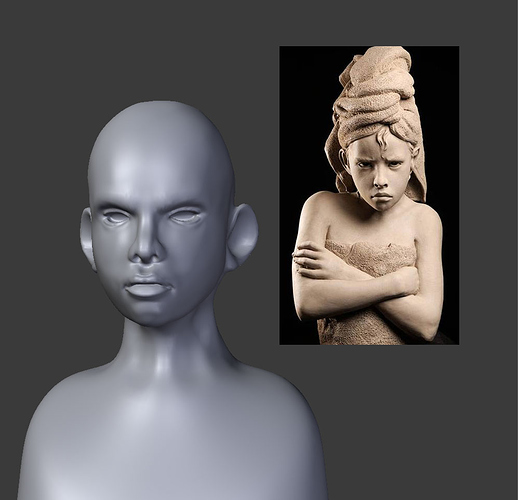 PS : how can I easily get rid of the brushes I don’t want in Blender. Must I save and quit every time ?

I’m starting another attempt from scratch. The basemesh I used had a bad topology, so I now use the Ben Simond’s basemesh (thx Ben)
Here I am, no subdiv, just blocking the shapes, adding some edgeloops.