Something I’m playing with. 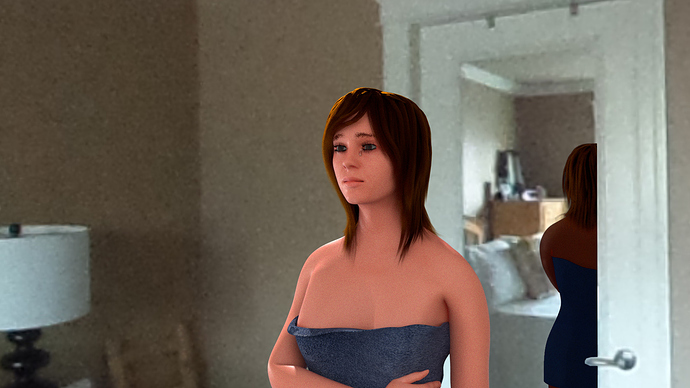 Her chest and arm are deformed, her shoulders also need work but the face looks quite good.

I really have to work on the skin, and then the environment. The background is a placeholder, as is the towel texture. With the towel, I’m toying with hair, but have to consider if my meagre 2GB gfx card can handle more

OK. It seems my GPU is happy enough. This is composited in Blender, which is why there’s fringing in the reflection, but bear in mind it’s just a placeholder, so it won;t be an issue at the end.

I can improve the towel, I can improve the hair, and I can improve the tear. What I’m really going to struggle with is my achillles heal (the skin), and so anyone who can offer advice (or even a working node setup) would be a massive help. I have a diffuse and normal map. I have SSS (though it’s clearly not great), but some helpful advice using both to make it more Skin and less plastic would be massively appreciated.

Every singe example I’ve found has collapsed nodes, so I can’t actually see what’s going on. 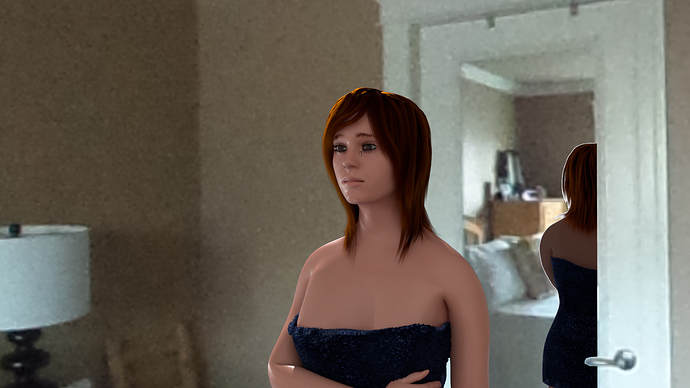 And wow. Found one I can work with. This shader is straight out of the box, and needs tweaking. Also needs more samples, but such is life. Nevertheless, I’m going to tweak the hell out of it. 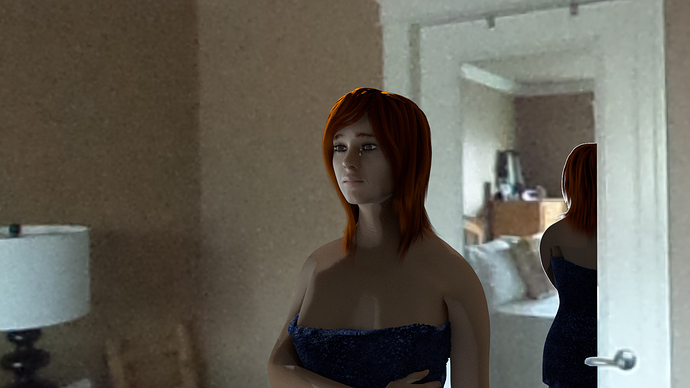 OK, she’s getting there slowly. The skin is improved, but still a ways to go. The eyebrows are causing me no end of hell. I know how they should grow (I’ve spent forever looking at my own), but knowing how they should be and having Blender do it are apparently two different things. The background is still a placeholder, so ignore the grain and the fringing in the reflection. It won’t be an issue at the end. I know the towel texture needs work, but it’ll do until I fix the skin and hair. And I know the shoulders slope too much. I see the intersecting geometry, least of my worries until I fix the textures (easily fixed), and the “hang” of the towel is wrong anyway.

So enough about what I already know is wrong. Anything else? 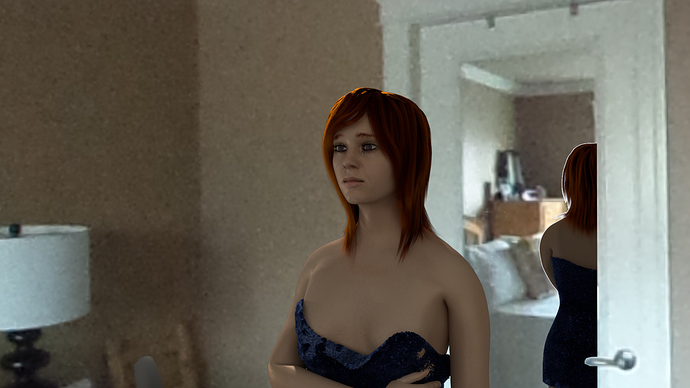 Her breat tissue is too “full” in the area just in from each armpit. You can seen this most clearly on her right side. It gives the chest / breast area an unnatural slope there I think.

Y’know, I hadn’t noticed, but I agree. However, when I fix the shoulder slope, it may fix that by itself.

So, an update. I’ve been working on the skin shader more, and I’m happier front the front (less happy with the reflected image, but I’ll fix it at some point). The skin is getting there, but still looks a little metallic to me. Anyone care to offer tips.

I seem to have moved the window away from the wall, but c’est la vie. I still have to model the out of camera scene for the sake of reflection anyway (the story will be in the reflection) so I can fix it then.

TBH, I’ve fixated on the skin shader for like, two weeks. I don’t want to have to start again from scratch, so I’ll fix this one. At least, I’ve moved beyond the HDR background.

Edit: The towel is horrible. It hangs wrong, and I have no idea why the geometry is showing (bear in mind it’s all quads, so more to the point, why triangulated). Is it wrong I texted my ex and asked her for a pic in that pose with a towel, for reference? 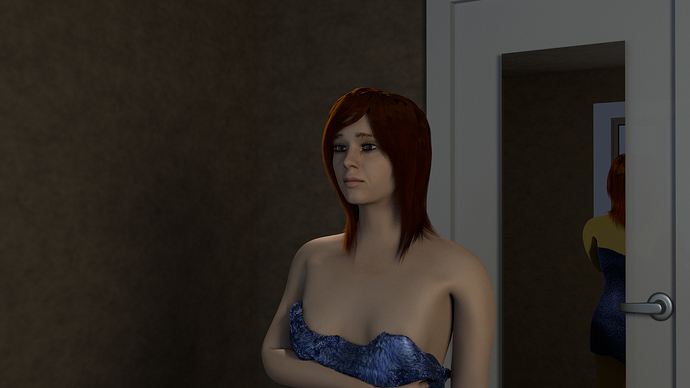 Latest update, the scene is almost there. I still have one asset to make for “the story”, but the downside is that will take an entire scene to be rendered, just to get an image.

I still need to work on the towel (restarted from scratch, but the material is still bugging me), but getting closer to a final.

Low samples this time - just 100, because, hell, it’s getting to long render time. 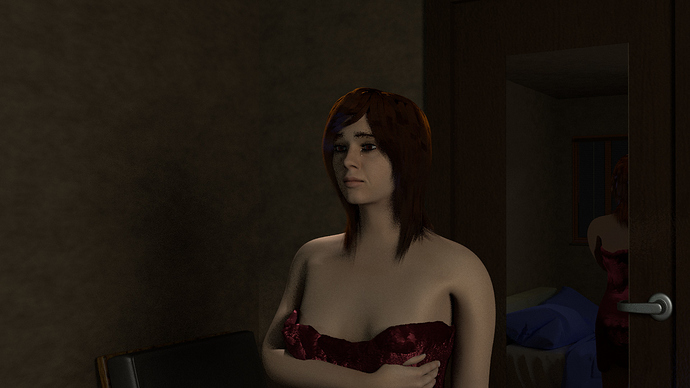 And an update. Still work to do, with plans so modify the shaders some more, but I think it’s coming along.

Unfortunately, this is now a 6.5 hour render (on CPU since Cuda broke - I have a separate thread and may be able to resume Cuda rendering), but for now, I can live with it. 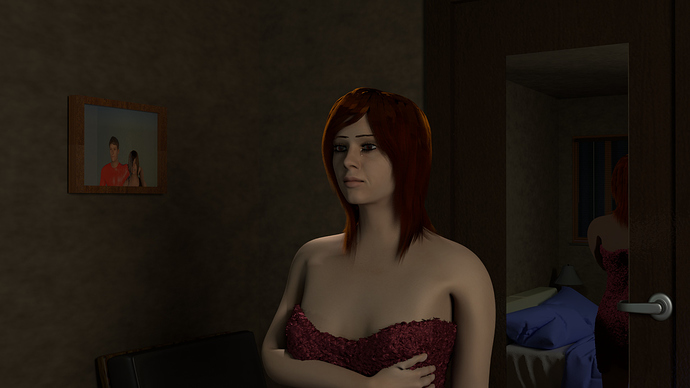 I scrapped the skin shader and started again. She either looked like a waxwork or painted wood. I think this is better. 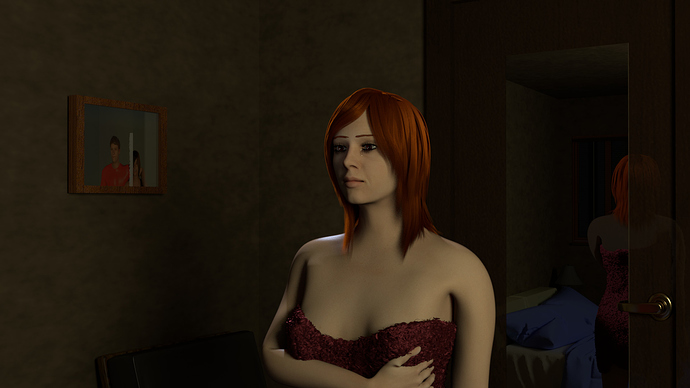 Yes, she has nothing to wear. Known dilemma.

OK, it’s been a while since I updated, but I haven’t been idle. I’ve been awaiting ManuelBastioni’s update to his lab, simply so that I could rip off his node setup for skin. Had to modify a little, and substitute my own maps, of course.

I also got fed up of battling with GPU memory, and so I dumped the hair on the towel and decided to do it all in textures. Back to a contrasting colour, though I have free reign over the final colour, now. 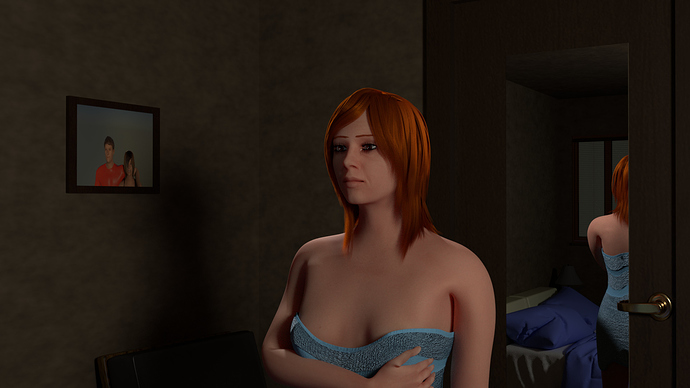 Please please fix the shoulders! It is going to look much better! You can add the collar bone, the sternocleidomastoid muscle, and the deltoid muscle.
This image is all about the shoulders! They need to be pretty, and convincing.
The face and the hair looks great!

When I get time to spend on it, it’s next on the list.

OK, I think I’m getting to the point where I call this done. 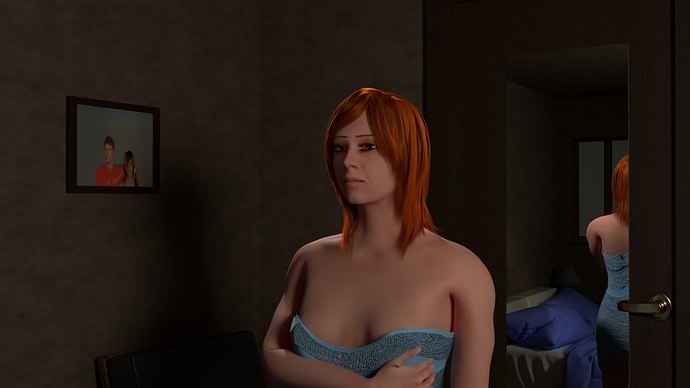