Working on a low poly axe, with creases marked for subsurf. Shown with 2 levels of subsurf. Yes, I know, why call it lowpoly? It’s a game prop, but I figured I’d make it subsurfable. I’m pleased with most of it, but I can’t figure out exactly how to make the transition from wood to steel less - CG, for lack of a better word. I need to dirty up the connection points a bit. Wire is base mesh, no subsurf.

Realtime screens. 2 hemis, 1 blue, 1 tan. I usually light game models with a setup like this (warm and cool hemis). 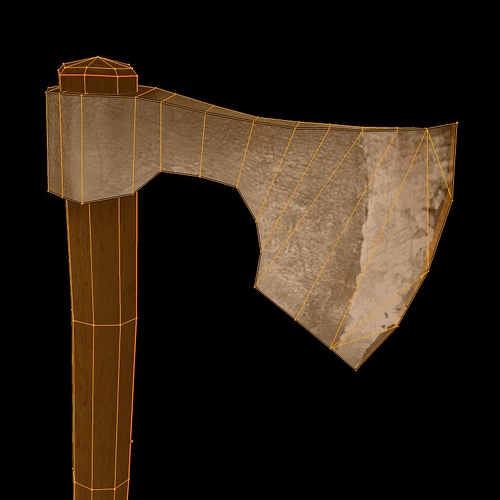 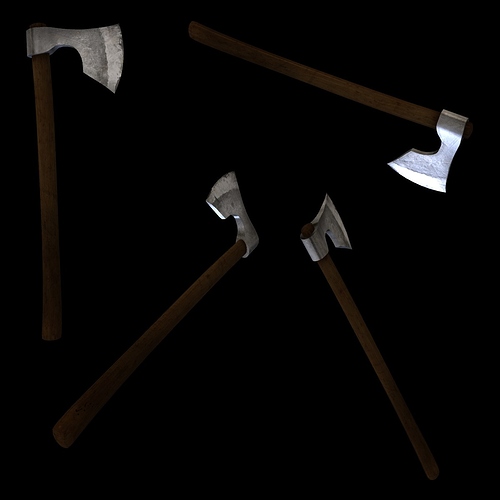 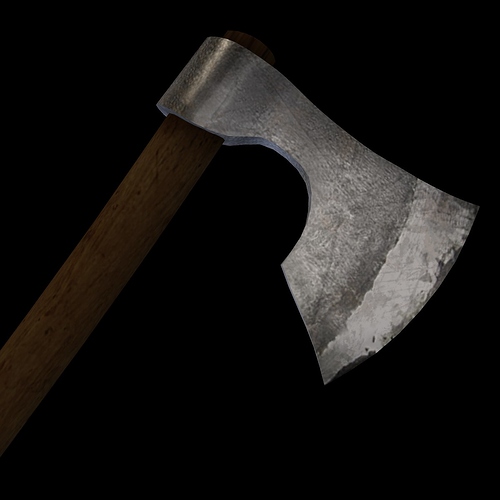 I would suggest it would be worth a few extra polys to model in the divit on the lower half of the blade since it’s a realistic style.

For the transition I think your gonna have to just add a few more loops and polys:( Or maybe just a thought…simalar to the blade and the textured divit (or whatever you want to call it:) ). Maybe just texture paint some very dark or even black ruffness around the edge where the metal meats the wood to make it look unperfect (CG ish) which is what I think the issue is now. Since that area would mostly always be shadowed it should work nicely.

Thanks. Yes, I may model a notch or two. Derek, yes, I’ll try that. It is AO baked, and then played with in PS, but the darkness at the connection point is generic. I think you are right, it needs geometry there, where the wood handle has compressed to fit into to head. I can also add the wedge at the end, inserted to keep the head on the handle.

It’s ok if it has a few more polys. I’ve been trying to “next gen” my props a bit more anyway. The time of super low poly props is coming to an end I think, and the difference between 137 faces and maybe 200 would be negligible in terms of frame rate, I think.

I think you are over thinking here. The exact method of attaching the handle aside your axe model looks fine. Here is image of the “real” axe:

Thanks, yes, I tend to obsess over small details. I do see that the handle tapers slightly as it enters the head. I can add that detail without adding edge loops, and then consider it done.

i think your axe IS already very good! do not worry about this transition wood - steel. imo, your axe is done.

Thanks. Like I said, I have a hard time letting go.