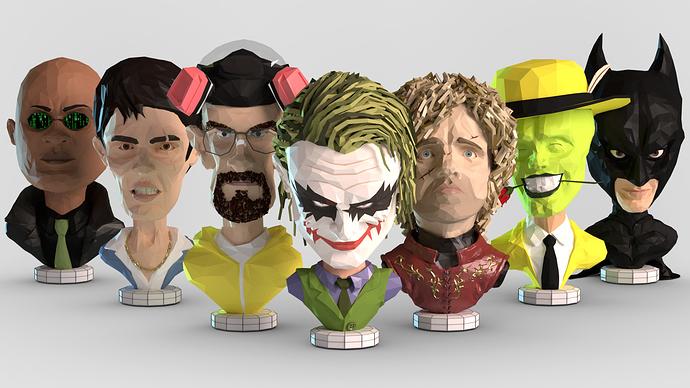 All 7 of them are made in Blender 2.70. I have used flat shading and Decimate modifier to get the low polygon effect.
See the full project here (With separate heads and a turntable GIF) :

You are very good at it.

I think you deserve more comments.
It’s just awesome, and I choose my words carefully.
As a fan of low poly art, I’d say you couldn’t do it better.
I’m in love with it, I think 7 singles images with these 7 characters fully done would be awesome!

I have done 7 separate images. There is a link to the full project below the image.

I have done 7 separate images, I have provided the link to the full project below the image. Check it out.

I did, and I can tell you I usually don’t open bit.ly link so easily

But I meant, not just the bust but the full body of each character, would be really cool !

Really amazing lowpoly art! Though I think that it can look better with more decimation for the noisy effect.

Nice, I love it

Neat concept and good job to boot. I like the Mask the best.
When doing this, is it low poly for the entire time, or do you sculpt/model to higher detail before decimating?

When doing this, is it low poly for the entire time, or do you sculpt/model to higher detail before decimating?

I generally sculpt to a higher detail, then use the decimate modifier and play with the value until I get a good result.

These are, without a doubt, plain awesome. It’s not just the likeness but the characters themselves that has been so wonderfully captured. Each one deserves a separate image of their own. Or if you must have them together, please do a scene instead of only the heads. Keep it up.