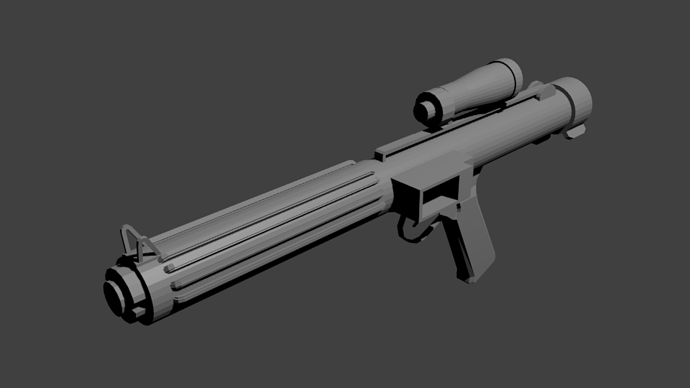 I was thinking more on the lines of smoothing edges out, but I when I apply the subsurf modifier using catamull-clark it produces odd results

I was thinking more on the lines of smoothing edges out, but I when I apply the subsurf modifier using catamull-clark it produces odd results

It creates perfectly correct results from your poor mesh. Subsurf a cylinder and you get that result. You need edge loops/creasing to strengthen edges, edge split modifier can also help.
Just slapping a subsurf modifier onto an object does not give miraculous results, you need a correct underlying mesh to support it. You have your low res version, now you can create a new model using that as a guide, breaking your model down into discreet parts, thinking about how the subsurf is to be used for each object.

ok thanks for the feedback it is much appreciated

Also as a side note, you can apply an edge loop after the subsurface modifier to affect it. This way you can watch your model pop back into shape step by step instead of guessing what it looks like one step at a time.

I picked some areas from the model if you want to clean up the existing model. You could get somewhat decent subsurf result by doing so.

(Top)
There are faces that don’t need to be there at all, which are left there when sticking an unconnected piece through another. There are also faces that are not properly connected while they should. There are also n-gon faces I didn’t color that would have to be changed or removed too.

(Middle left)
Removing those leave some open areas temporarily but gets rid of the stretching.
(Middle right)
N-gon face to quad only. It would be faster to just inset (I) the face, making a quad faceloop around the n-gon face but still.

(Bottom right)
Supporting edge loops near edges.
(Bottom left)
Left ones are the original without and with subdivision surface modifier.
I got rid of some of the geometry because you need less with the subsurf. Still not good topology but I eliminated the triangle faces and reordered faceloops so it’s possible to get some control of the rounding by either sliding the edges (ctrl+e -> edge slide) or by adding loopcuts (ctrl+r).
This also shows the effect of removing the unnecessary faces (top ones).