I’m thinking about making a basic platforming game, and if I ever get started, this’ll be the main character! The model is very cartoony, with big hands, feet, and head. So far the model has 815 faces, but I still have to make her wings. And clothes :-|. I’m also gonna draw more facial expressions, which is one of the main reasons her face has a rather flat shape.
Any feedback would be appreciated. 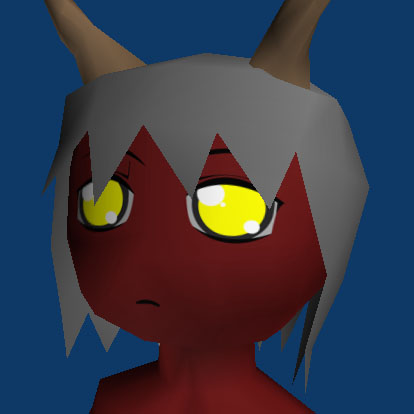 Looks very good for only 815 verts. Is this the color she will be in the game?

Looks very good for only 815 verts. Is this the color she will be in the game?

Thanks :). Yes, her skin will be red, if I use the story I have in mind. She was supposed to be an imp, but I changed my mind when I was done modeling the body: she’s too tall to be an imp, among other things.

Like the style.Very anime.
Thats pretty good for 815 faces so far.Somtimes less is more.
Love to see the other expressions.

I made two new expressions by modifying the one I started out with. The pink blush might be a bit excessive, though.I’ll try to make more comical and typical anime-style expressions later.

Impressive. I like her very much. Is it too much to ask for a wire ?

Impressive. I like her very much. Is it too much to ask for a wire ?

Thanks:) Here you go:

You need more verts to deform the feet and shoulders properly. Also if you use IsoSpheres for the breast they turn out much better. Given that they’ll never be animated.

Look at this for an example:
http://www.gorilla3d.com/images/lowpoly/femaletexturewired.jpg

I think you are right guys!