Just thought I’d post something that I’ve been working on to help me learn Blender. Uni has finished for the year so I don’t have access to Maya or Photoshop anymore and I’ve always wanted to learn Blender and the Gimp. So here I am.

This is a remake of an orc that I made for an assignment. So far I’m fairly happy with how it’s turned out. I do miss the Split Polygon Tool in Maya though. I’ve had a hard time getting use to Blender’s Knife Tool but I’ve managed so far.

Welcome to Blender! Looks very nice, I like the overall style. My only suggestion would be to lengthen the height of the torso. It would also be interesting to see this model subsurfed.

looks swell my man - and I have to agree with you on your point about blender’s knife tool - more like the MESH-BUTCHERY ABOMINATION DEVICE FROM HECK!!

Out of all of blender’s modeling tools, the knife tool is the most confounding if you ask me. I mean, when it comes to organic modeling I find it damn near useless. It just farts every thing up into a million ugly mishapen triangles. Blender needs some N-Gons and fast. Cause the fake-Gons just aight gonna do it for me.

I used Hexagon 2.1 before Blender. And if it wasn’t for how bugged Hexagon is I’d still be using it. Blender is great for everything else though. Just the knife tool. The ugly filthy nasty bastard. =)

Oh yeah, I think his hands could use a -buff-. It looks nice. I like the effeciency of your faces =). The pony tail is nice hehe.

Thanks for the replies guys.

Pink Mesh: I see what you mean by the torso. I don’t know how I didn’t pick that up, thanks. Once I make it longer ill post a subsurfed screen shot for you. Oh yeah, I’m not that new to Blender. I just finally got over my phobia for the interface

MagicMyshu: Nice rant! But I know exactly what you mean. I hate all those extra faces that appear and having to go back an fix them to get the whole model flowing again. I’ve been told the same thing about the hands in another forum too. I just can’t seem to model hands. I do alright with everything else but when i comes to hands, I really struggle.

i’d say the amount of faces you’ve sunk into that lip ring is pretty un-necessary… you could just about get away with texturing it, if not at least remove the hole…

Yeah I was looking at that same thing just a minute ago and i was thinking the same thing. I wasn’t happy with how that look anyway.

Thanks for the crit.

Here’s an update on my orc. I have made changes according to the crits that I’ve gotten from the previous posts.

I’ve lengthened the torso, made the hands bigger (but I’m still not sure they’re big enough) and I’ve removed some of the detail around the mouth area. I’ve also included a subsurf version that Pink Mesh requested.

I’m a lot happier with the hands now. I re-modeled them after viewing a video that modeled the fingers first, then extruding from the base of fingers to create the rest of the hand. Doing it like this made hand poly’s flow a lot better.

Much improved! Any thoughts on how you will texture him? My only crit (Which is quite a nit pick.) would be to move the ankle area up a little bit and reshape the toes slightly. 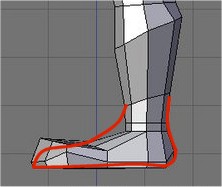 looks swell my man - and I have to agree with you on your point about blender’s knife tool - more like the MESH-BUTCHERY ABOMINATION DEVICE FROM HECK!!

I have to ask…if you don’t use the knife tool then what do you do…I seem to have the exact same problem over and over. I even run into this situation when I sub-divide. Do you just extrude or something?

Thanks for the crit Pink Mesh! I moved some verts and it looks so much better! I’ll have to remember to do that for other humanoid characters i do in the future.

As for the texture, i wanted to paint him only with pants and the rest of him green, with some sort of wrinkling and scaring on the skin. In my ortho’s he has that cross ‘suspenders’ i guess, but I’m not sure if i should paint them in or model them. I still have to model his shoulder pads.

I still use the knife tool, 3dak. After a lot of experimenting and frustration I found a not-so-suitable workaround. What I do is basically place the loop cut where i need it, make the cut and merge a whole bunch of verts that i didn’t want to their neighboring vert, forming nice quads or tris. I do the same thing for the Knife Exact and Midpoint.

I hope that made some kind of sense!

Thanks for the crits and comments.

Yeah I mainly use the loop cut…I don’t merge all that often…I just end up with too many tri’s, I think?

Hey to eveyone following along on this thread.

Just a small update with some changes I’ve made with suggestions from another forum.

I’ve made the legs, feet and torso a tad larger. It was suggested that they were all too small for an orc to be able to support himself, which does make sense when you think about it.

Second update for the day!

Just some small adjustments to the quad muscle, again suggested from another forum. I’ve made it more bulgier. I think the model is almost done, unless anyone else has any ideas on how to further improve it?

Next step will be UV Mapping. Not to sure exactly how thats done, so ill be heading over to the wiki to find out how.