Well darn…what can I say? Just something that came to mind one day.
The Golf Car is built from an EZ GO Cart for you Golfers out there…hehe.
Hope you enjoy.
Holeshotv311 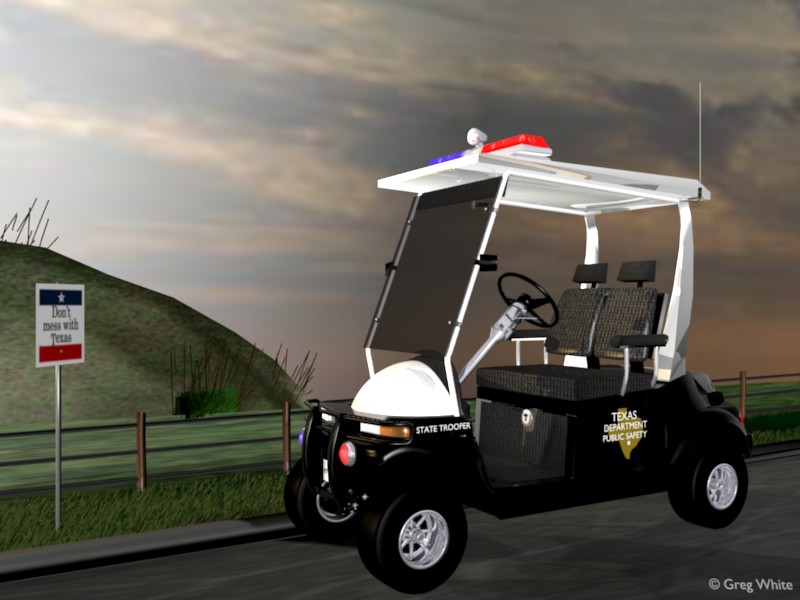 Good work, the cart looks great, I just think you could do a little better with the rest. Did you try using a light set as a Sun to illuminate the scene?

…yeah, the background needs to match the rendering of the vehicle.

Is the “person” who drives the car called a Trooper? Why not call him a “Troop”? I mean, that’s what they call individual solders at war today, “Troops”. Wouldn’t you think that they should call them troopers instead. I have always remembered a “TROOP” as a calvary or a group of solders. Not as an individual single person. I think that the media has butchered the English language and don’t want to admit to it.

Yes, A Texas State Trooper “IS” a part of a “Troop”. You got that right…lmao. And yes, I deserve the crits on the scene. I was trying to get a late afternoon view. The light source is coming (if sitting in car) from a 2 o-clock position. There is a slimmer of sun peeping trough the clouds, thus the yellowish glow seen on the car here and there.
I took advice from another project and used it here by putting a light on the car to show more detail. This may have been what threw the whole scene off.
There is “no” light on the background image, but it is reflecting off the light way over there at that two o-clock. I had to use “negative or shadow only” lights to get the shadows and I figured in late late afternoon at sunset, the shadows would be dim as well? I really thank all who crticize for I am only scratching the surface with Blender. As I have said in another post, I have spent most of my learning curve in “modeling” which I guess is pretty ovious.
If anyone understands the effect I was looking for, please feel free to throw some suggestions my way. I love it! Thank you all!